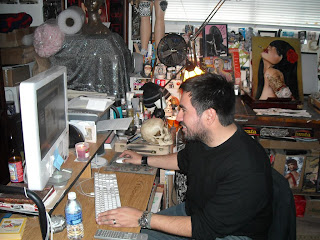 My wife and I headed out to Riverside this past weekend to catch up with Brian Viveros and his wife Jenie. We got a chance to check out his studio and we snapped some shots of the works that are coming together for his upcoming show with Matthew Bone, Southern, that opens this coming May out in NYC at Paul Booth’s Last Rites Gallery. 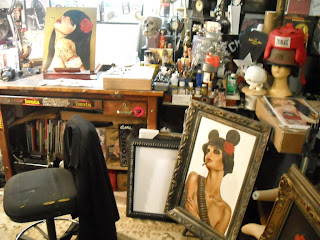 The new works are looking so tight, he’s really coming into his own in a major fashion. The emotion captured in each new work is spot on. We are extremely honored to be working with Brian and can’t wait to host his debut Los Angeles solo show next fall, but more on that soon enough. Until then, we’ll be headed back out in a few months to his studio to get a wrap up of this new series of works before they are shipped out to NYC. So watch for that.

We’ll be doing a more proper interview with Brian in the next month or so, but below are some choice quotes that we’re included in a recent feature that ran in Truce magazine out of Europe. 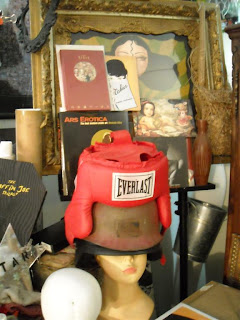 “Things that inspire me are everday happenings, finds and observations of life. Like a crazy f*cking helmet from a swap meet that you found and you say to yourself ‘what a great element for a painting’. It’s like you are constantly collecting visual information to translate and bring to life. Sometimes, words can also make for a good painting – or people you see on the streets smoking their cigarettes at the bus stop. It all feeds the addiction and inspires you to want to do and create more and more. These are all pieces to the puzzle that are building up in my head.” 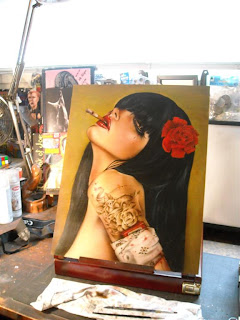 “Painting these girls feeds my addiction. Like a vampire out for blood or my bad smoking habit that I just can’t seem to quit. The female form takes on many shapes and sizes and I dig on changing and distorting it just a bit, which excites me and it reminds me that nothing is perfect.” 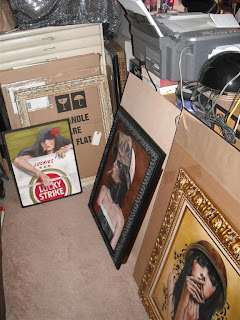 “The Smoking Army began back in 2000. I hadn’t yet really honed in on a particular signature style but I knew that painting sexy girls smoking cigarettes is what I wanted to do. Since then, the Army has grown and taken over my studio. They hold me hostage at night and I like it. They whisper in my head and say ‘create more, bring me to life’. Like a mad f*cking scientist in his laboratory I’m always trying to come up with new ideas and elements to decorate these smoking temptresses.” 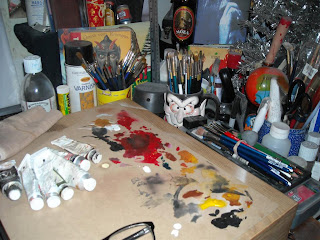 “I don’t know why all these girls are smoking. I have tried to get them to quit, but they refuse to wear the patch or chew that special gum which is supposed to help you to quit. Just kidding, the smokin’ thing is a piece of myself. I enjoy smoking and drinking a lot so I just thought it would be a cool element to add to this Army of Smoking Girls.” 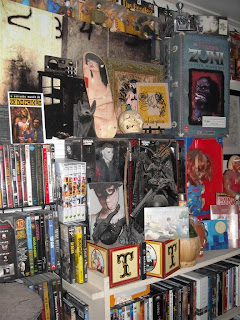 “I always found smoking sexy as a kid – like in the silent black and white films, when these women would be smoking on the screen. They were these rebellious bad ass chicks that didn’t give a f*ck.” 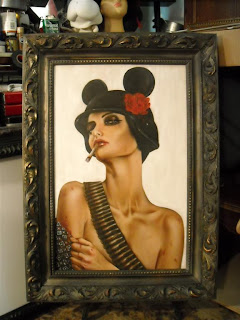 The beautiful new work featured above (still in progress) was our favorite from his new series, and it plays nicely off his recent “Mess With The Bull” work that we featured at this past December’s Vanguard Fair as part of our ‘Looking Glass’ exhibit.
While out in Riverside, we were also treated to a special advance screening of Brian’s latest film project, Southern. The look and feel of the film is unnerving, and the finished product came out just great. For more on this project and his other films, check here.
Speaking of “Mess With The Bull”, look for a very limited edition, hand-touched giclee of “Mess With The Bull” to be issued soon through us (more details announced soon).