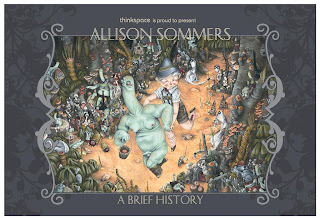 An interview with Allison Sommers

Abandoning deference for playful irreverence, Allison Sommers draws on her interests in renaissance and baroque art, toying with staid motifs and trading solemnity for nose-thumbing whimsy. She delights in deconstructing the seriousness of historical tropes of art, and tempers sweetness with subtle touches of dark foreboding and sexual deviance.

Allison Sommers studied early modern history at the University of Virginia, where she was able to legitimize a lifelong love of the historical narratives and themes of the Old World, much of which continue to inform her work. She currently works as an art director for a newsweekly in Charlottesville, Virginia, where she lives with her partner Gerrit and their hedgehog, Ludwig. She has previously exhibited work at Thinkspace (Los Angeles), Ad Hoc (NYC), Gallery1988 (Los Angeles and San Francisco), Distinction Gallery (Escondido), DvA Gallery (Chicago), and at the Gen Art Vanguard New Contemporary Art Fair at Art Basel Miami. 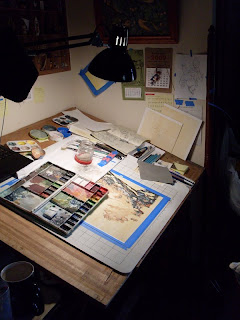 A Brief History explores a culture of long-necked creatures. Fleshy and often nattily-dressed, they are prone to quarrel, consume, and bed each other with hedonistic abandon. Their footing with the creatures around them is ambiguous and often contentious; they are both predator and prey to the Rudi Cats, ‘sweet’ young humans, and other beasts around them. 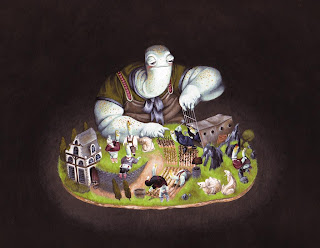 Please talk a lil’ bit about the general idea/vibe behind your new series of works for ‘A Brief History’. What can our gallery patrons expect this coming May?
When I was first planning the show, I knew that I wanted to work with the long-necked creatures of mine that were showing up in my paintings. They’re so silly and ambiguous, little nattily-dressed ids causing trouble, fornicating, murdering, being all sorts of naughty. I wanted to place them more firmly in their own world and explore the interactions of that culture with others that may be in their vicinity– the Rudi cats, the little children around– and this show is the result of that. It was very important to me that they were not placed too rigidly in their surroundings, or especially within any historical trajectory (the show title is a little joke, really), because I found that to be a little stifling creatively, and a little old-fashioned pedagogically. 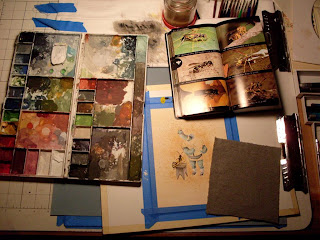 What’s your earliest memory involving art or creating art?
I have no firm recollection, really, but it surely would involve my mother– she encouraged anything I wanted to do, and from very early on that was mark-making. I think my child brain was her own little science project, she loved seeing the ways in which I grew in that way, so I always had lots of excellent art supplies around to fiddle with. It’s definitely something that’s always been with me. 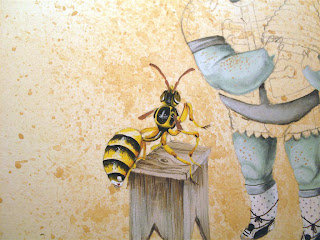 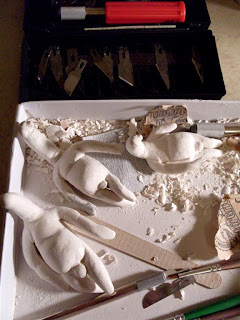 You excel at a variety of mediums and just recently started to experiment with sculptural based works. Where do you see yourself taking your world in the years ahead?
I think I’ll probably always concentrate on 2-D work; there’s something elemental about it to me that’s difficult to articulate. That being said, it will be important to continue to pursue a more rounded-out approach towards my work in terms of media. I think it helps flesh out different concepts of my worlds in ways that are always surprising to me– plus, it’s just irresistible to fiddle. That’s how I started in on the sculptures in the first place– I bought a block of paperclay as a little treat to myself to break up the time between paintings, just a little ‘craft project’ to mess around with. I think I’m going to make some forays into more intensive 3-D, with environments– dioramas, perhaps… I’ve also been threatening to make a stop-motion piece with my partner, so that could be in the works, too. He has an astonishing artistic brain, it would be a treat to work with him. 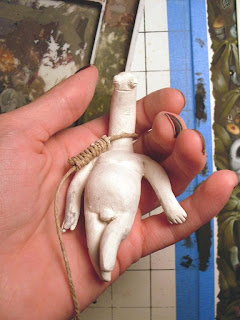 You currently reside in Charlottesville, VA – being so disconnected from the art world at large – do you feel this helps in any way to influence your work?
I’d have no idea until I lived closer to the ‘art world,’ really. I think that in a practical way it may help me because now I don’t feel guilty spending most of my free time away from the world, painting– Charlottesville is beautiful, but I find it a bit dull. That may also hinder me, though, because sometimes I feel very drained, and very much wanting the inspiration of being in the midst of a large, invigorating art culture (or, at least, having some nearby gigantic museum in which to lose oneself). 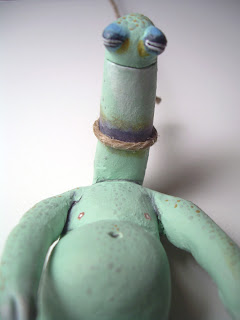 For those new to your work, can you give us a lil’ background on some of the recurring characters featured in your work such as the Rudi Cats, the long-necked slug like fellows and all that inhabit your world?

First and foremost are, of course, the long-necked fellows. They’re naughty, horny, hermaphroditic, and almost always well-dressed (though the misplacement of pants seems to be a particular problem). At the least, they’re funny, mocking stand-ins for the egos of our own culture; at the worst, they’re sexually deviant, creepy kidnappers and murderers, wrapped in impeccable tweeds. I certainly don’t want them to stand for anything in particular; they’re very ambiguous to me, and I delight in their strewn guts just as much as I do their triumphs and grandeur.
The Rudi cats are much less ambiguous to me; they’re nasty and extremely stupid predators. I have some vague horror when I’m painting them, I can see them slinking about like feral cats, skin taut against the ribs, smelling of the grave… yuck. Their size is variable in relation to the long-necked fellows, which controls what interaction they have with them– Rudi cats would just as soon gnaw their bones as be domesticated by them.
I suppose there’s a third class of characters, the various dumb beasts lumbering around my paintings– they may be the only sympathetic creatures I create. Make of that what you will, I suppose, since they’re usually domesticated and maltreated. 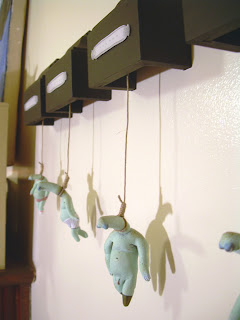 You attended the University of Virginia where you studied early modern history. How has this schooling helped to inform your work?
I think topically it helped a great deal. Particularly for this show, I found myself reaching back for many of the conventions and concepts of the culture I studied and finding ways to skew it. This led me quite by accident to deal with more religious themes than I wanted to at the outset, but I suppose that’s what you get when you start digging into Western society’s closets. At any rate, I think one of the most important things that I took away from my history degree is removing my impression of the ‘past’ as something static, distant, and drastically different from any cultures now– people have always been silly and lewd and wonderfully disgusting. That’s informed me greatly as I explored the long-necked fellows as an (possibly historical, if not just anthropological) other. 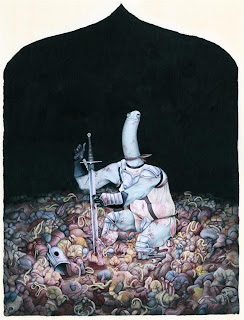 Tell us something about yourself that someone would never guess in their wildest dreams.
I love the Lawrence Welk show. 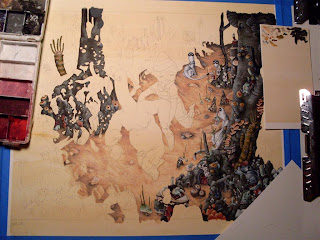 Are you reading anything right now?
I’m on a strange, indulgent D. H. Lawrence kick right now. I just finished Lady Chatterley’s Lover, and am now working on Women in Love. I’m suddenly finding him so fresh and irresistable, a perfect mix of modernist critique and delightful sex. I’m also working my way through a book of short works by Schnitzler. 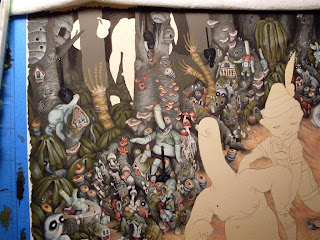 Do you listen to music while painting/drawing? If so, do you have a current favorite that inspires?
Oh, of course. Very recently I dusted off a few old Tori albums that I had stowed away years ago and am digging them. (cliche! I know.) Generally speaking, I’m all over the map, but I can always get into my creative space with the likes of Bjork, Philip Glass, Beirut, the Decemberists, and any sorts of New Wave/NDW. And I adore jazz. 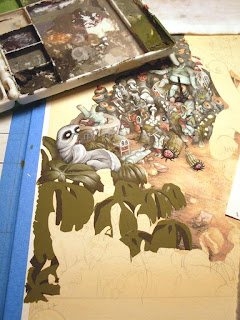 I also spend a few hours a day listening to podcasts– I’m addicted to Escape Pod, PRI: Selected Shorts, Hooting Yard, and Classic Tales, to name a few. I’m also a serious news junkie, so Here and Now, TOTN, and a whole slew of PRI and NPR podcasts are always in the queue. 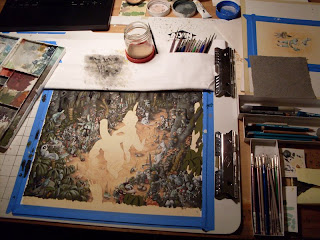 If you had to explain your work to a stranger, how would you do so?
Oof, I’m always at a painful, stumbling loss when it comes to this. I usually mumble something about Bosch and gouache and try to change the subject, hah! Perhaps my difficulty stems from being both very, very serious about art, but striving for levity and nose-thumbing in my work. I can’t imagine what people think when they hear me explain it, but I’m sure it’s rarely close to the real thing. It’s a real stumbling block for me, it’s rather embarrassing. 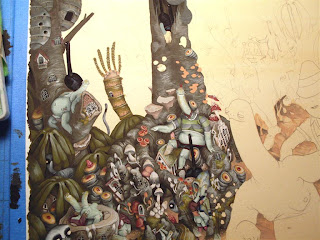 If people walk away with one thing gained from seeing one of your exhibits, what would you hope that would be?
This will probably sound evasive, but it’s important to me that the viewer have their own experience of the work, particularly since I don’t have an agenda (of which I’m aware). My personal experience of my work is very intimate, particularly the larger pieces in which I spend so much time fleshing out details that I get bewildered that it’s not real, and I have a hard time imagining that I could communicate that to another person… at the LCD, I suppose I hope one experiences these as somewhat ambiguous, fun-poking, escapist works. I do feel that if you explicate them too thoroughly, the joke’s on you. 🙂 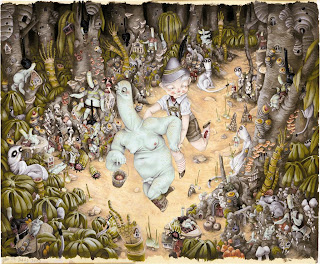 What have you got coming up in terms of shows after ‘A Brief History’?
I’ll immediately return to the studio to continue planning next year’s solo with Thinkspace, and to start on my works for a few group commitments I have in 2008. I’ll have a piece in the Kokeshi show at LATDA in July; I have some work going to Ad Hoc in Brooklyn for August; and I’ll take part in a group show entitled “Monsters!” in Charlottesville that month as well. 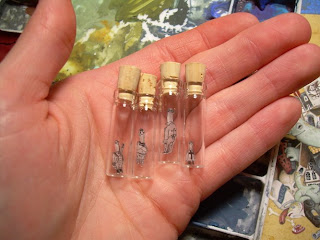 Sneak Peek at Allison’s lil’ “ghosts” that will be haunting our gallery this May
What are you doing right after this interview?
Working on some of my super-secret tinies for the show! 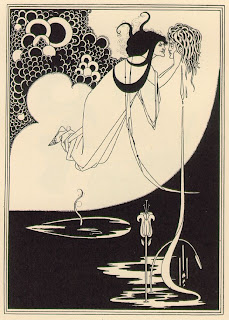 Aubrey Beardsley “The Climax”
Favorite artist (living or dead) and what makes them special to you?
Oh, to ask for one is cruel. Let’s say… Beardsley. I love the period in which he painted, and the things he depicted; he was technically just brilliant, I crave his lineart; and his naughty, brilliant sense of humor– rarest indeed. I wish there were more like him. 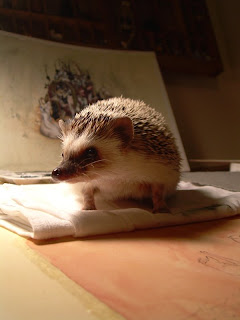 Ludwig the hedgehog
You’ve a very unique studio partner in the form of your pet hedgehog, Ludwig. How did you come about settling on the lil’ fella? He’s so cute!
He’s a she, for what it’s worth, but you can tell we’re not too heavy on gender conventions, given her name. 🙂 Anyway, my interest in hedgehogs was one of those sorts of ill-advised obsessions at first, but I finally convinced my partner that we had to have one, and she’s turned out to be one of the very best pets imaginable. They’re so silly and improbable– the too-small legs for the fat body, the penchant for sticking their heads in places they ought not (toilet paper tubes!), this certain behavior called “annointing” that I’ll let readers google for themselves– they’re really a trip, just the sort of undignified silliness that I love. And yes, ridiculously cute. 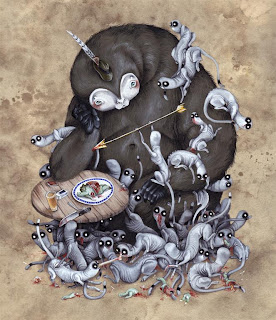 ‘A Brief History’ from Allison Sommers