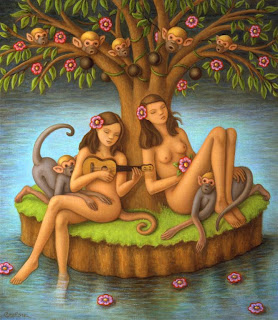 Amy Crehore’s debut Los Angeles solo exhibit that opens next Fri, Feb. 13th at Thinkspace will feature a new series of oil paintings of playful, iconic nudes and will introduce some new characters (in addition to her well known cats, pierrots and monkeys): a lion, a tortoise, and large flying insects. Ukuleles will play a role in these new narratives, giving the works musical ambience. Some of these dream sequences will take place in nature, others in curtained rooms.

Crehore has also painted over a dozen antique ukuleles (see below) as part of this special exhibit. Most of these instruments are from the American ukulele boom of the 1920’s. Crehore personally hand-picked a collection that represents a variety of styles and designs including banjo ukes, mahogany and koa ukes, as well as art deco novelty ukes. On these ukes, she will incorporate motifs from her paintings, plus she will be adding creative type and logo design. Crehore’s long-time music partner, Lou Reimuller, is also a luthier and he has lovingly restored each of these instruments. These ukes are all “players” as well as fine art objects. 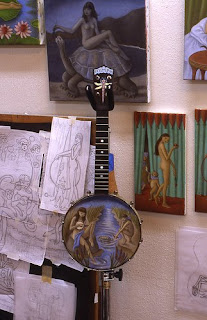 Following is a special interview Amy took the time to do recently for us… also watch Juxtapoz.com in the coming days for their ’20 Questions’ feature with Amy and be sure to pick up the latest copy of Inked Magazine (also featuring a nice interview with Amy).

1) Please talk a lil’ bit about the general idea/vibe behind your new series of works for “Dreamgirls & Ukes”.
I had been using antique ukuleles as props in my paintings and I wanted to expand the idea into painting on some actual antique ukuleles.The idea evolved as I gathered together a variety of rare ukes mostly from the 1920’s and had a luthier restore them. I have always been into vintage instruments anyway and the music of this period, so it was a natural thing to do. Almost like a tapestry of many colored threads, I wove my vision into a series of works that fit together in a wonderful way. There are 14 paintings and 13 ukes that all relate to each other. My new oil paintings depict dreamy landscapes and rooms full of animals, nude girls w/ukes and pierrots- all interacting with each other. There are many different stories happening here and the characters express different moods. The titles of the paintings also have to do with music. Inspired by the beauty of the design of each ukulele, I came up with motifs to paint on them that are based on the characters my paintings. I made up names for them and designed headstock logos- there’s Demon, Nymph, Peekaboo, Squirm, Tuxedo, Moth, Wasp, to name a few. Hopefully, I have created an entertaining and surreal experience for this show with added elements of history and music. The ukes are all playable, yet also fine art objects.

2) Much of your new body of work revolves around your love for ukuleles, with several works even using old ukes (as commonly referred to) as their ‘canvas’ in your upcoming exhibition with us. Where / when did this love for ukuleles start?

I received a beautiful koa uke from the 1920’s as a gift in my late twenties. A little later, I bought a banjo uke from this same period in a shop in Portland. I like the smallness of soprano ukes, their unique sound and novelty aspect. I like the design of vintage headstocks and variety of body shapes -from round camp ukes to banjo ukes to little guitar-shaped ukes.The history of the uke is very interesting, also. The instrument was used in early jugband music and blues as well as Hawaiian music. 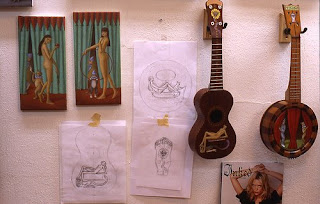 3) Tell us a lil’ bit about the band you have with your husband, The Hokum Scorchers, that will be playing a special set during your opening reception on Fri, Feb. 13th at 9PM.
My husband, Lou Reimuller, who is also the luthier for this show, has been playing traditional blues, jugband, & rags on instruments from the period -1920’s and 1930’s- since he was a kid. He will play a vintage National resonator guitar and a banjo uke in this performance. I will play the washboard. We will sing and play kazoo as well. We used to play at festivals in the Northwest, most notably Bumbershoot and Folklife in Seattle. We will be playing traditional American songs from the 1920’s-1950’s that one can find on Yazoo and Document records.

Doing posters in 4th grade for the book fair and taking art lessons (drawing a model) while on vacation in New England in an old schoolhouse. My mom also signed us up for ceramic classes, plus church fairs where I sold painted rocks.

5) When are you most productive / when do you normally work on art?

Most productive in the morning when I am alert. I work all day from early morning until dinner at 7pm. 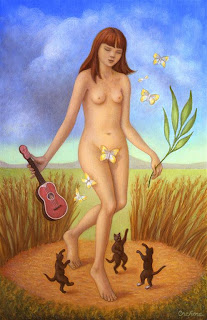 6) For those new to your work, can you please give us a lil’ background on the meanings associated with some of your recurring characters like your little pierrot, the use of monkeys, devils, felines, etc.
These characters represent humorous and psychological aspects of relations between men and women. I use metaphors and double entendres. I draw them from my head, but if you look at art history you will see these characters recurring throughout. The pierrot for instance, he’s a lovesick fool that was seen in the Italian Commedia Dell’Arte of the 16th century. He is also seen with a banjo on postcards from the 1920’s.

7) Tell us something about yourself that someone would never guess in their wildest dreams.

I was a wrestling score keeper in high school.

8) Are you reading anything right now?

Not much time to read lately, but I have “The Chinese Art of Winning” on my bedside.

9) Do you listen to music while painting/drawing? If so, do you have a current favorite that inspires?
Yes. I have Eddie Lang and Victoria Spivey on the player.

Sunny, mild, painting in the morning, take a hike after lunch up the butte near my house, resume painting until 7 and then go out to eat at the Korean place on the corner. 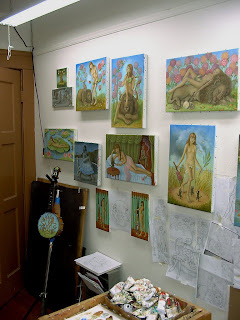 11) If you had to explain your work to a stranger, how would you do so?
I would tell them these are intuitive and imaginary works based on memories of feelings, dreams and experiences and that I paint the things I like. I also would explain that I do a fully designed pencil sketch first and that a lot of what works about the painting is due to the design and the layering of paint (trying to create a seamless whole).

12) Favorite artist (living or dead) and what makes them special to you?

This is hard because I like so many. I will pick Giotto Di Bondone because he was a unique and innovative bridge between primitive medieval art and the Renaissance which followed. I like the emotional way he uses the human figure and his sense of architecture.

13) What have you got coming up in terms of shows and projects after “Dreamgirls & Ukes”?

My number two Tickler Uke which is finished except for my paint job, a book of my art, and many other things that are not finalized yet, so it’s too early to talk about them. 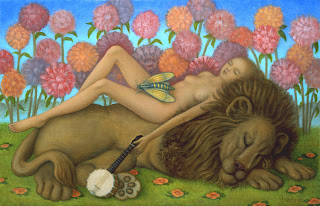 14) If people walk away with one thing gained from seeing one of your exhibits, what would you hope that would be?
A sense of joy and deja vu.

15) What are you doing right after this interview?

Packing up the rest of my art for the show to ship to you.
Dreamgirls & Ukes
Featuring new works, an installation plus performance from Amy Crehore

Also showing in our project room:
Anthony Clarkson – The Silent Treatment
(NOTE: look for an interview with Ant to be posted in the coming days)…