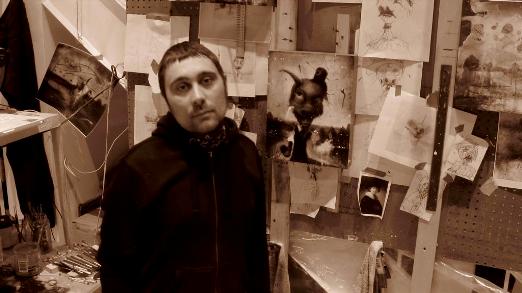 An interview with Anthony Pontius

Anthony Pontius currently lives and works in Brooklyn, New York. He has taught extensively at the Des Moines Art Center, the University of Kansas, the Lawrence Arts Center and the Herron School of Art and Design. His work has been exhibited in many galleries, universities and venues nationally.

Pontius creates via a variety of mediums (mostly oils on wood panel and graphite on paper) to create his beautifully apocalyptic landscapes that bring to mind the unearthly works of the great Hieronymus Bosch. Infused with a dark whimsy all his own, Pontius’ narratives bring to mind the dark fairy tales of the Brothers Grimm. His work is infused with a spirit that is hard to pinpoint, a sort of underlying frentic energy created via his intense layering technique. Beneath the smog defused glow lies a ghostly underworld not that far removed from our own, although in Anthony’s world, there is no happily ever after.

Please talk a lil’ bit about the general concept behind your new series of works for “the caped cobra and his merry band of riders”?
the caped cobra and his merry band of riders are a group of humans that evolved during the end of the technological world of old in order to survive, they must coexist with nature by any means much like early human nomads. The band traverse the land searching for their long lost connections to the world as they grow the union creates their new identity the caped cobra is the elder of the group. He has reached his goal, he is the most experienced and unified. The merry band of riders represent the youth and the future of the culture. They are represented at various stages of their journeys. The entire group of paintings and drawings document all of the stages that are required for the riders to exist…there are almost 30 paintings and drawings that depict the rise of the troupe.

the caped cobra has a storybook type of surface with images that speak about the evolution of a group of techno-free beings that have a linage to modern humans…the quest shows young characters, adults and elders, all who show their search, vulnerabilities, lessons learned and their success… the show also shows the physical evolution of my painting process…i show the beginning stages, vulnerable stages, mistakes, and successes… so my method and the merry band of riders share a similar traverse…

I know each piece goes through various ‘stages’ before you really dive into the image itself. Tell us a bit about your process when preparing a piece for an upcoming show.
i generally spend about a year on a body of work… i do a bunch of reading, taking photos and riding my bike… during that time i start thinking about certain topics that begin out of free associations that i have in my head… i then begin drawings based on those visions and i just let them evolve into the rational world…. from there i begin working on wood panels… i play with the first stage where i use gesso, soap and water…. i just basically “play” with the materials and let them be what they want to be… once they dry i begin working with watercolors and try to pull out a landscape or figure from what the earlier stage offers… i also start letting the watercolor to do what it wants and i also keep introducing new materials like graphite and just continue to play… i think of the characters that i drew or the associations that have been in my head for awhile and start to find them in the residue of all the experimenting in the early stages… from there i just keep balancing all aspects until i have something strong then i destroy that and rebuild until i have exhausted how the image and the techniques work together…

What/who do you consider your biggest overall influence?
Life is my main influence, i mean everything influences and fuels my work… i do not like to separate art from life because i am afraid that i may miss something and i do not want to keep within a boundary of this or that… i may not like something but it may influence me, like television. i need to be aware of it because i may feel the need to show people something that television is doing to culture … it is just the same as if i do like something, lets say Goya, i want to make sure that i do not make a Goya painting but be influenced by him because he was pissed off about war and showed its affects on his culture… i want to be a conductor and i want to allow the good and the evil be seen because that reveals the balance of the whole…

If you could stand by and watch the creation of any piece of artwork from over the years, which would it be and why?
i would love to see the entire 14 years of my time painting… i think that i would learn so much more about how and why i paint. to see an entire evolution would be like looking back at your entire life (maybe that is why the band of riders has this timeline type of presentation)… if i just looked back at one i would only be able to tap into that one place in time…and i feel that i would be robbing myself of the experience of seeing something again…

What’s your earliest memory involving art or creating art?
i love this question because it made me think of these drawings that i used to do when i was a kid… my baby sitter when i was in the 2nd grade was this dude named scott who was 16 and had a bitch’n camaro, he was totally the 1981 high school dude…he made me copy cars from that CARTOONS magazine… it was all downhill from there!

Having taught art extensively at various venues, please share a quick word of advice to artists about to graduate from art school?
network network network, develop a studio practice, and remember that all of the hard work is not over… it is just the beginning…

What’s your favorite thing about living in Brooklyn? Perfect day out in Brooklyn?
the variety of amazing and inspiring people that i meet , the ability to find something new just about everyday… the energy is so powerful here… perfect day out is a walk with my dog and my lady kym to our favorite place for a beer… and then off to explore the 400 plus year history of the area on my bike… 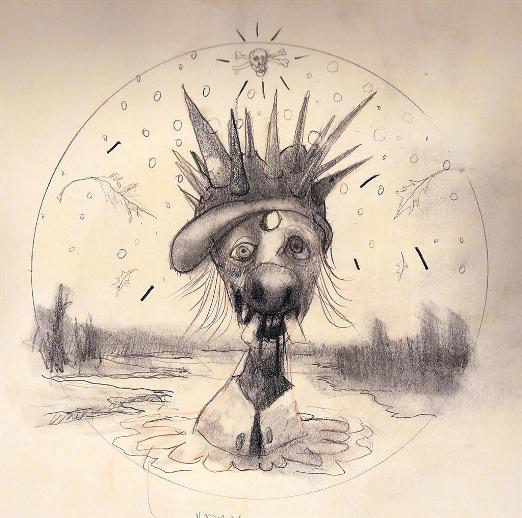 If you had an unlimited budget and time was not an issue, what grand artistic vision would you look to bring to life?
for a few years now, i have been planning a large scale panorama that would fill a room the size of a gymnasium and it would include the ceiling and ground space to bring to life a full interaction with one of my paintings… i would have 3d versions of my characters that viewers could interact with as well as the landscape… oooooh why are you tempting me?!

What have you got coming up in terms of shows after your solo show with us?

i am honored to participate in mark murphy’s Survey Sellect this summer in san diego
http://murphydesign1.blogspot.com/2010/03/survey-select-exhibition-71610.html

april 2011 i have a solo show @ last rites gallery – www.lastritesgallery.com

fall of 2011 i am a part of a 5 person show @ feinkunst krueger in hamburg germany – www.feinkunst-krueger.de

i have a few books slated for the end of the year as well. 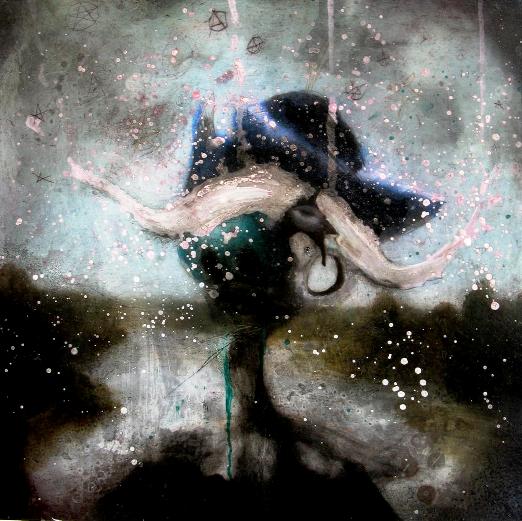 Anthony Pontius
‘the caped cobra and his merry band of riders’

Preview link for ‘the caped cobra and his merry band of riders’ from Anthony Pontius: http://www.thinkspacegallery.com/2010/04/works.php