An interview with Brian M. Viveros

Thinkspace is pleased to present the debut Los Angeles solo exhibition from Riverside, California based artist Brian M. Viveros. The Dirtyland will feature a series of new oil paintings on wood alongside a series of mixed media works on paper and a small edition of hand-touched unique screen prints on wood. The exhibition will also showcase a mixed-media installation featuring a new short film directed by the artist alongside sculptural works created in collaboration with artist Gustavo Ponce.

Viveros made his directing debut in 2005 with his quietly eerie, boldly stylized short film Dislandia, a psycho-drama revolving around a young girl who exists in a desolate world full of dreamlike images that range from bizarre to symbolic and erotic. Southern, his latest surreal film, returns cinema to the unclean. Southern is an experience of primordial sights, sounds, and sentiment, blanketed by a fog of troubling eroticism and violence. Viveros was also recently featured on the Sundance Channel’s ‘Pleasure for Sale’ where they featured a behind the scenes look at the artist and the dislandic crew that helped him to create his film Southern . 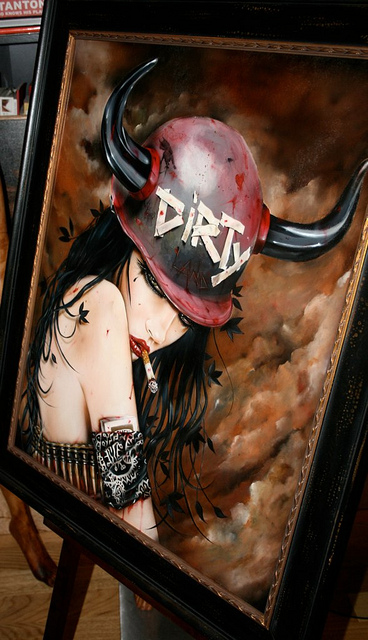 Please talk a lil’ bit about your new series making up ‘The Dirtyland’.
Dirty, very dirty my friend. Just kiddin’, the series is a mad, mad world of New Smoking troops showing off there new helmets, new smokes, battle scars… total no holds barred. The Smoking Arm-Me of power will be marching there way into Thinkspace on October 2nd so go get your best helmet and come out to the Dirtyland. The exhibition will feature my largest painting to date ‘Samur-Rising’.

You’re also shooting a new short film to premiere at the opening of ‘The Dirtyland’ – can you a share a bit of the concept behind this new short?
In our traditional dislandic-southernesk approach to filming, me and Mr. Eriijk Ressler will be putting together a little four to five minute surreal loop that will be played somewhere hidden inside of the Thinkspace Gallery. Shhhhh come find me. A fun little loop-dee-loop-dee-loop for the whole Dirtyland family to enjoy. That’s about all I can say really because we never know how things are going to unfold when we film. Lets just say there will be a helmet involved and some smokin’ hahaha.

Your friend Gustavo Ponce collaborated with you on the sculptural works that will be included in ‘The Dirtyland’ as well as the must-see installation. Can you tell us a lil’ bit about how this collaboration came about?
After I had the title in mind for the exhibition there were these ideas that we’d talked about and discussed in the past. If I ever I did have a Dirtyland show we should do this or could we do this. Always thinking ahead and trying to push the envelope. I had the idea sketched out in my head for sometime. After talking it over with Gustavo, who’s worked with me on past films and is just an amazing sculptor, he assured me and said “Yeah, I can rock this homie” and let’s just say he fukin’ killed it. So for all you coming out to the exhibition you are in for a really dirty treat. Hats off to my close friend and homie Mr. Gustavo Ponce for bringing the Dirtyland to life. IT’S ALIVE, ALIVE!! You can check out more of Gustavo Ponce’s work at: www.gustavoponce.com

Please tell us what helmets mean to you / what they represent in your work?
To me, the helmets represent STRENGTH. When you wear a helmet you feel strong, you feel protected, like you’re ready to go into battle and take mutha-fuckas out.

At what moment did you realize you wanted to be a full-time artist?
Early on as a child I was always into art. I was always into anything different and constantly being creative, I started making my own splatter films at age twelve and drawing since I could hold a pencil. I saw a lot as a kid and I still use a lot of these elements to help decorate my Arm-me of Smoking gals.

What do you consider to be your biggest overall influence?
I’m inspired by so many things… music, movies, people, words, my dogs, my skulls, smoke, everything man, just everything. 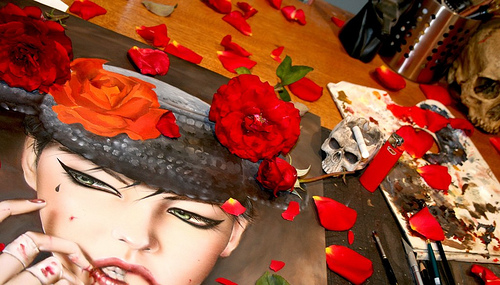 What have you got coming up in terms of shows after your show with us?
I will be showing at Paul Booth’s Last Rites Gallery in NYC next year and would like to thank all of you Sour Harvest readers out there. See you this October! Cheerzzz!

Opening Reception: Sat, October 2nd 7-10PM with the artist in attendance
*Free autographed poster to the 1st 200 through the door this weekend + the Komodo Food Truck will be on-site all night serving up the goods