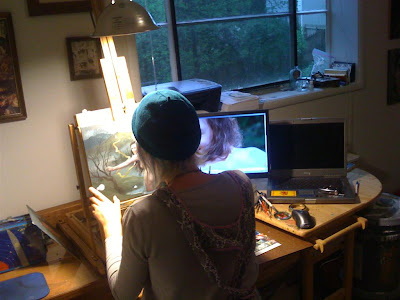 An interview with Catherine Brooks
Catherine Brooks has been working tirelessly to expand her artist “vocabulary”. Through her successes and failures, Brooks feels like she has finally learned what is important to her art, and what it is to explore during the creative process. Brooks has developed her own personal mythology, based around the legends and tales passed down and weathered through oral tradition and the rise and fall of empires. They reflect her ideas on love, memory, and the inexplicable human talent for personifying assigning responsibility to the cycles of life, and its manifestations. It was, for the artist, a beginning, a birth. It is a collection of pearls and remnants, an allusive menagerie of natural diplomacy, sensual symbiosis, and hints of great tales and legends to come.
Brooks has a BFA in Fine Arts from the Pratt Institute of Art and Design in Brooklyn, NY and completed a residency at Campus Hanoi in Vietnam. She has shown regularly in galleries over the past three years. Highlights of her resume include a solo in NYC at The Proposition Gallery in 2007 and taking part in last year’s SCOPE London. 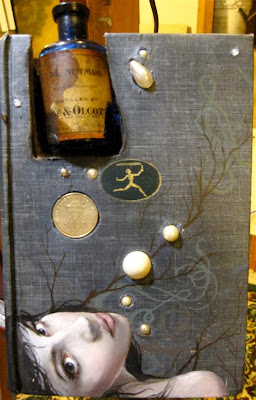 Please talk a lil’ bit about the general idea/vibe behind your new series of works for “The Seeded Wind And Silent Motion; An Oeuvre Of Beetled Beauty”?
I felt a little brave giving my show such a wordy complicated title, but that is exactly what i wanted it to be. Most often the show titles seek to reinforce the mood or narrative in the body of work, some hint of the feelings or physics in the universe we unfold for the viewer. I wanted it to describe the creative space my work was conceived in. This title has a very literal meaning for me and for you I’ll bare open it’s meaning. I should first mention that all my analogies of life tend to be nature based, I was raised in an all female landscape business that was founded and run by my mother, for years we shared generations of stories over the tops of the flowers we cared for. Those ecosystems provided a framework and context to talk about the more complicated parts of life. That is where my imagery comes from. The concept of the seeded wind comes from the idea of pregnant creative whims. You can work in your garden never noticing that a plant has volunteered and grown tall right in front of you, it’s your garden, and you define what is a weed and no one else. So much of life is chance, every moment is a freeze frame full of things free falling, ungerminated, but an instant from their realization. Beetles and insects have a primal role in the health of a garden, they germinate flowers, transport seeds, and compost the soil. Before bees had evolved, there were beetles. Magnolia trees for instance evolved to be pollinated by beetles. I have always viewed them as workers silently making something without protest or the need to communicate their intentions just existing and making. Making work for me is not often an active intentional thing, I constantly feel like some one else made it. The works feel completely unfamiliar when I am finished with them. After the years of “beetling away” in my studio i have grown to associate the image of the beetles in my work as the hand of the artist. It represents the aspect of myself that’s unfamiliar to and independent from my social construct. 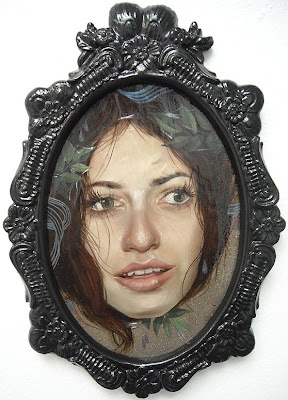 If you could stand by and watch the creation of any piece of artwork from over the years, which would it be and why?
This is such a difficult question, there are so many classical pieces that i thirst for, that standing in their presence makes me feel vivid and alive, i want to peel away each brush stroke one at a time. But, ultimately paintings are illusions, despite my often inconveniently veracious curiosity, I prefer some things to keep their gowns on. When i was working for the Barnacle Brothers here in LA (they are a amazing fabrication studio making sculptures for museums and other artists). I fell in love with how they made things. I would have loved to sit next to Louise Nevelson while she made her Sky Cathedral. Also it would have been amazing to witness from the conception to the unveiling of the Statue of Liberty, which is one of the biggest public sculptures I am aware of that didn’t require the support of slavery or a cast system to build. I also think the politics and logistics of a project on that scale would be amazing if not ridiculous. I would settle for an HBO drama about it. 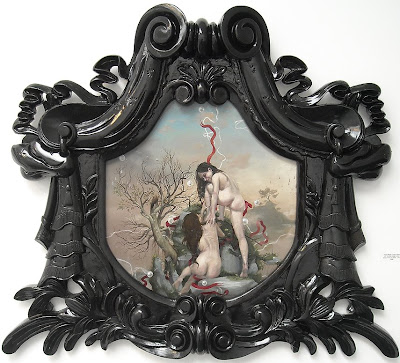 What do you consider your biggest overall influence?
I’m not sure if i can answer that. I feel so unaware of myself as artist. Maybe music. It is, if anything, the key to my creative process. When I shared my studio with the stupendous ZOSO, we would listen to the same music, he once pointed out that whenever he turned the music on or off I would immediately stop or start working, like my on-off button was crossed with the stereo. 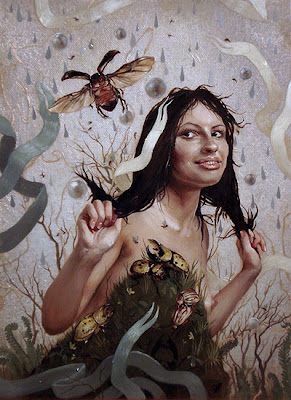 You recently relocated back to Virginia. How are you adapting to the new vibe of things out there? Major difference between California and Virginia?
Moving back to Richmond, VA was almost as awesome and influential for me as leaving it. The hot damp southern air, wraps a quilt of pungent odors and lightening bugs around me when I take my break laying in a hammock at 7:30 every evening. I love it. In my hometown there is so much historical lamina, patched and anchored. That quilt doesn’t get put away in the fall it gets another layer. It is so vivid. Having seasons again is righting my internal timing already. The Major difference has to be time. I didn’t experience that when i lived in NY (everything that was different revolved around space). Socially they are so similar, Richmond and Los Angeles, both are like floating islands and will do things their own way damn the rest. Maybe it sounds weird to people local to LA, but its like another dimension with its own set of physics. I sometimes think they could be the same city in different realities. The revitalization downtown is happening so similarly to the gentrification of Downtown LA, they are writing about it in the local newspaper (which is another can of worms). Maybe we will have better luck with our community gardens. The timeless otherworldly qualities of Los Angeles makes it feel like reality is bendable, like you will never have to pay back those three hours you got on the flight over. Like its suspended forever, or that I was pick-pocketed for time on the 101. 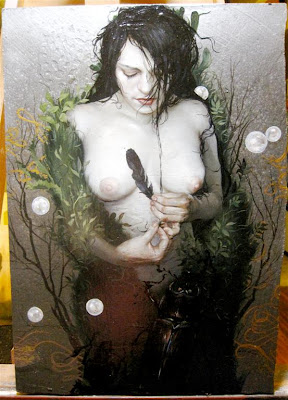 You have a great lil’ ferrit as a pet and you often had him with you during your openings and such when you lived out in Los Angeles. How long have you had ferrits as pets? What brought you to them in the 1st place, as they are a rather rare pet?
Awww, my ferrets! Its a dangerous thing to get me on this topic. i serendipitously rescued my first two ferrets from a party the summer of my sophomore year in art school. Its was a bit awkward, as my roommate also bought two baby jills on an impulse the same day. We had a big place out in Brooklyn, but the sound of all 16 feet pattering down the hallway was often accompanied by someone yelling “INCOMING”. For the next 7 years I have always had one (or two) they went to figure drawing classes perched on my shoulder and road trips, they got their own pedestals at my senior thesis show, and have co-piloted many road and motorcycle trips. I’d say they are pretty worldly beasts. Shiki, our current familiar, has been to about every gallery worth going to in LA. She couldn’t come on this trip because she is currently charming hearts in NYC with my fiance. This was a bit of a relief for me if you consider all the knocked over paint cups and foot prints in my studio right now. Would it be silly to say i feel a little naked without her? Does anyone want to lend me their ferret for the opening reception? I’ll send them back well trained. 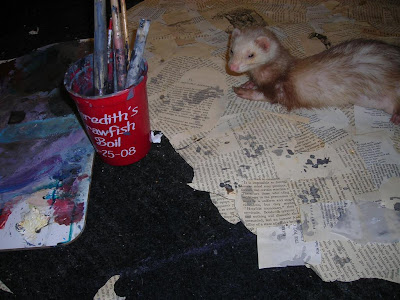 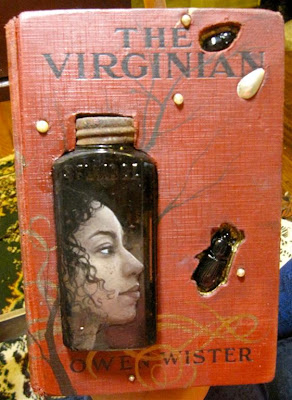 If you had an unlimited budget and time was not an issue, what grand artistic vision would you look to bring to life?
My love of gardening and of simulated environments always give me terraforming level art ideas. If I could really have my way I would acquire a huge empty oil tanker, park it in the middle of the Pacific trash float, and convert it into a sustainable ecosystem. A fully powered, independent community complete with a mangrove reef around it. Recycling the plastics we harvest into massive transparent floating sculptures akin to icebergs. Since life is so inventive and random i would love to see how different organisms adapted such structures to their own uses. That could be called process works or an environmental experiment but to me it would be the biggest greatest art project yet. Then I would do paintings of them for fun.I also just thought this afternoon it would be pretty sweet to go to a really hot desert and make giant drip castles with sand melted into glass in some sort of forge suspended on a crane. It would probably not cool evenly and crack , which would make it dangerous and forbidden. I love the idea of that, like a thunderstorm, something intense and beautiful but best viewed at a distance. 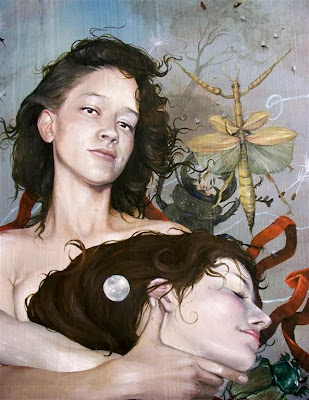 What have you got coming up in terms of shows and/or projects after your show with us this July?
Should this be one of those mysteries reveled on layer at a time? I would hate to ruin the suspense of Salome’s veils, besides the magic and wonder that happens at Thinkspace and the Kokeshi doll show at the Japanese American National Museum here in Los Angeles. On the east coast I’ll be showing a multi-media collaborate project with my best friend Tamara Cervenka about identity and mythology, we have an enormous artistic vocabulary between the two of us and we have both picked one new medium to learn. She is learning needle work and embroidery, and i am learning glass blowing, I will leave you to speculate on how we will combine the two.
‘Til the next veil. 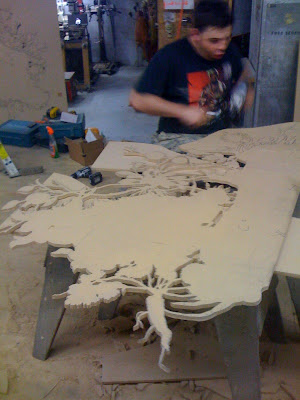 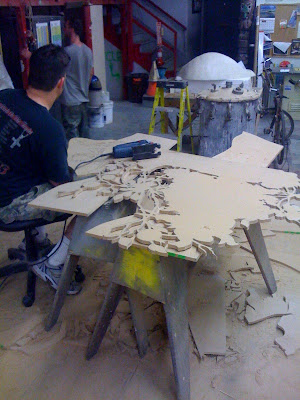 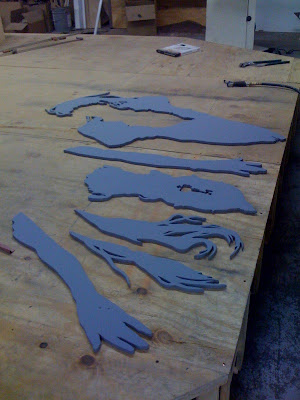 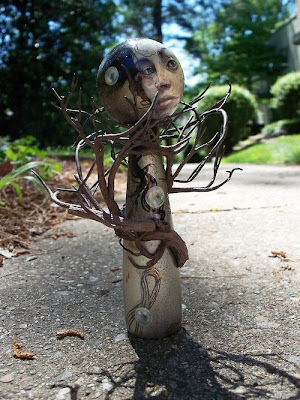 Catherine’s customized kokeshi doll for this weekend’s show at the Japanese American National Museum
Catherine Brooks
‘The Seeded Wind and Silent Motion; an Oeuvre of Beetled Beauty’
July 10th – August 7th @ thinkspace
Opening Reception: Fri, July 10th, 7-11PM
Catherine will be in town for the opening reception, so be sure to say hi when you come by.
thinkspace
4210 Santa Monica Blvd in Los Angeles / 323.913.3375
http://www.thinkspacegallery.com/

3 thoughts on “An interview with Catherine Brooks…”