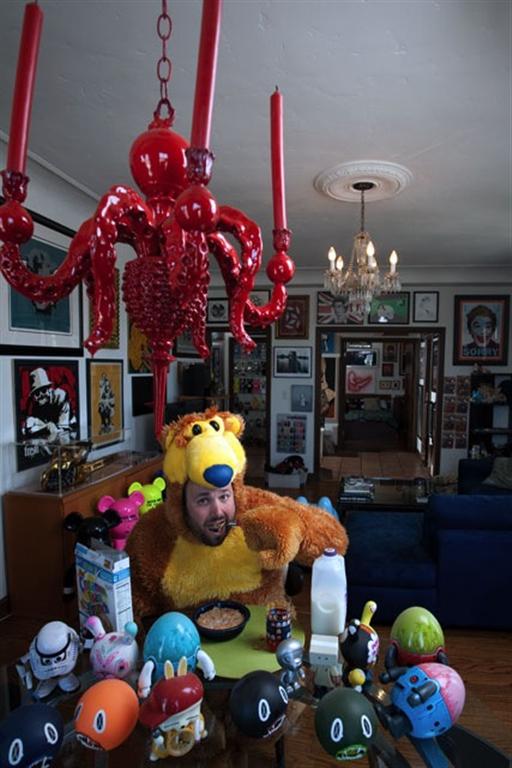 An interview with collector Jon Halperin

I first met Jon Halperin a number of years ago just after we opened our gallery and we’ve become good friends since then. Much like myself, he has strong ties to the music world, and we both often make comparisons between the art world and the music world. It’s really amazing how many correlations there are between the two. If you’ve ever met him, it’s undeniable how big a fan he is of the new contemporary art movement, he’s covered head to toe in tattoos featuring the artwork of Futura, Greg Simkins, Banksy, Scott Campbell, Shag, Derek Hess, Huck Gee, Shepard Fairey, Luke Chueh, James Jarvis, Frank Kozik, Murakami, and Joe Ledbetter (lord knows he’s added some more since I interviewed him a month back or so).

Oh, by the way, his dog is named Brooklyn and rules all (you’ll see him in a few pics below). 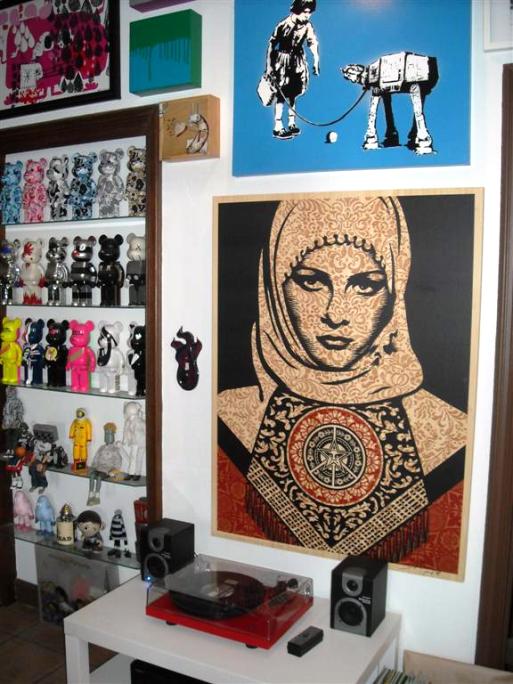 His home is much like our own, covered floor to ceiling in art, toys and memorablia – a true treasure trove of pop culture goodness. Please read on… 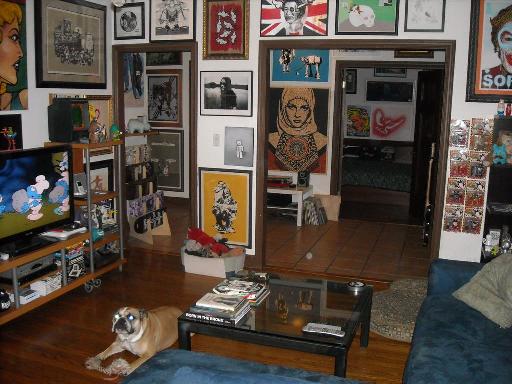 How long have you had an interest in art?

I started collecting in the early 1990’s. I used to go to Dark’s Art Parlour in Santa Ana, Soap Plant on Melrose (now La Luz), and a gallery in San Diego. I collected weird stuff…like serial killer art. I was doing my master’s in psychology at the time, so i was super interested in that type of stuff. It quickly moved to low brow in the mid 1990’s. Then to pop in the 2000’s. My collection is around 200 or so pieces at this point… 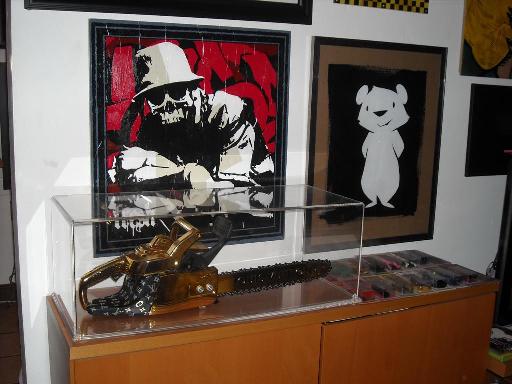 Does anyone else in your family collect or create art?
Eh, parents bought art, but it never changed. I like to evolve, change it up, or i get bored. I don’t have a creative bone in my body. It took an hour just to write that sentence….no it didn’t, but it would have been awesome if it did. My grandfather painted cartoonish paintings in the 1960’s, 1970’s. 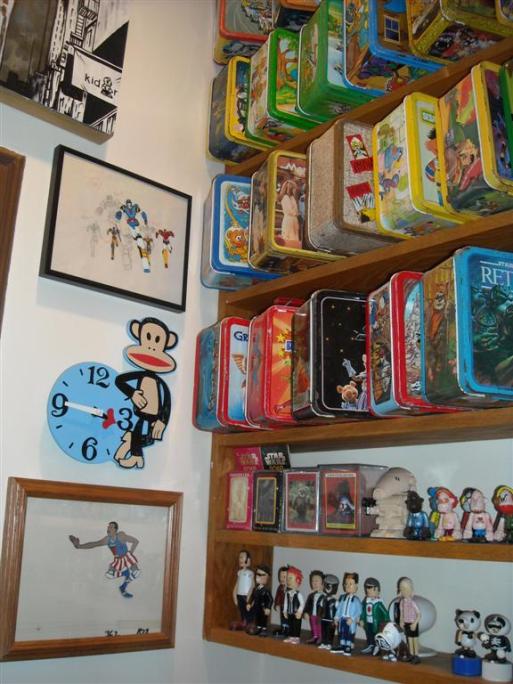 Besides art, is there anything else that the collector bug in you searches out regularly?
I ride vespas/lambrettas. So I am regularly on scoot.net and on the search for bikes. I like interesting blogs like coolhunting, stuff like that…I buy items that I like, but don’t necessarilly need. I am anything but a minimalist. I shop at costco.

Otherwise, because I book a music venue, I check out my music blogs/bulletin boards so I know what the hell I’m talking about. 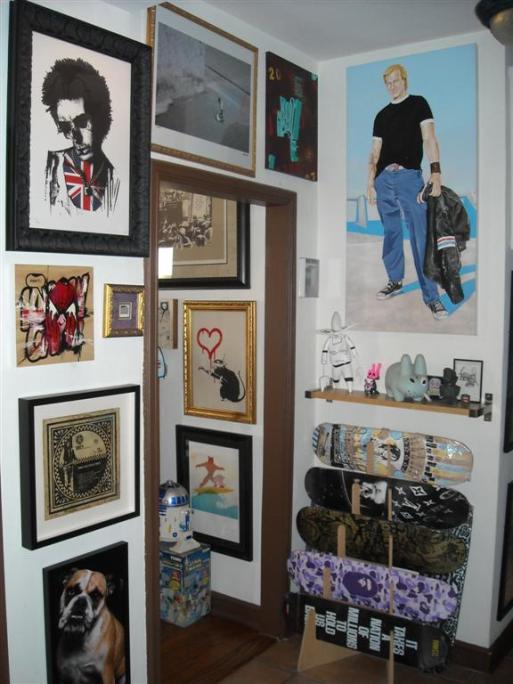 With artists like Mark Ryden, Todd Schorr, Camille Rose Garcia, Shepard Fairey and The Clayton Brothers all having major retrospective museum shows in the past year or two, the future is definitely wide open for this lil’ bubble of the art world. Where do you see this genre of art (new contemporary, urban contemporary, pop surrealism, outsider, lowbrow, etc) going over the next 5-10 years?
It’s interesting…artists have blown up, but who is taking the torch from Ryden? No one is quite there…maybe it’s the economy dictating…maybe we are in a slight lull, maybe it goes in waves? I really don’t know…. 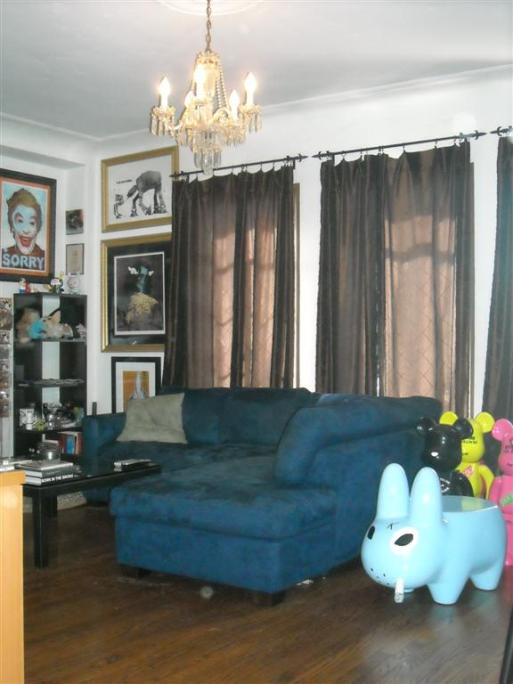 First piece purchased and when/why?
First piece was given to me by my parents. It was a painting of a bird by my grandfather who had passed away just prior. I love it…..It stands alone in my bathroom. As far as purchase, I really cannot remember…maybe a drawing by Roman Dirge?

Do you have any sculpture in your collection?
I have several pieces by Adam Wallacavage (pictured throughout feature). A chandelier and a wall sconce. I love them more than chocolate…and I f*cking love chocolate. 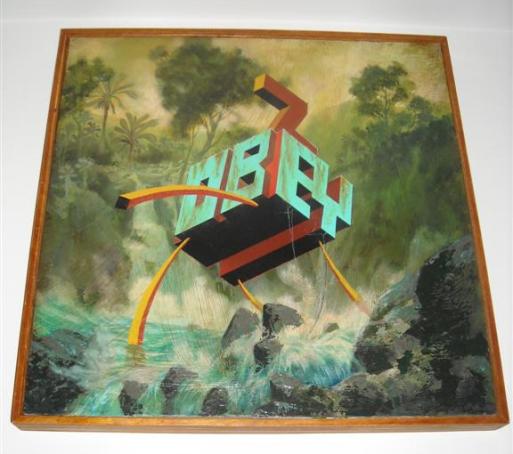 Favorite piece you currently own?
Hell. How do you REALLY ask that question? How about ten? Fair? In no particular order:
1. Luke Chueh “I Am Not Your Plaything”
2. D*Face “Lenticular” edition of 80
3. Adam Wallacavage “Covered in Punks Blood” Chandelier
4. Banksy “Morons” sepia print
5. Invader “Onespace” original
6. Miss Bugs “Wonderful Angel of Death” Handfinished AP
7. Shepard Fairey “Sound Clash” original
8. Peter Gronquist “Louise Vuitton Chainsaw”
9. Jeffrey Brown – commission that he did for me as a surprise from my girlfriend
10. Miss Bugs “Don’t F*ck with a Duck Hirst” original 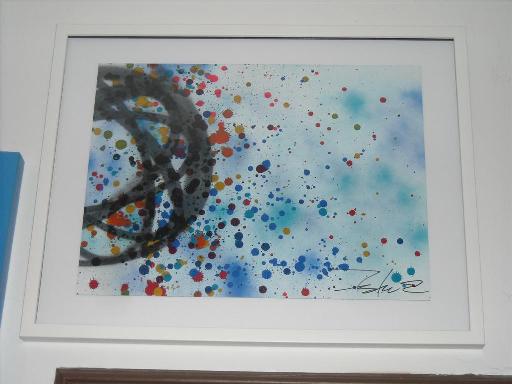 What was your biggest score of 2009 collecting wise? Best score to date?
Best score to date? Any of my six Banksy prints….I realize that I may not be a lot to some, but I cherish them….
For 2009? Not really a “score”, but for my birthday, my girlfriend bought me the “This Are Two Tone” print by David Storey (http://www.david-storey.co.uk/shop.html). I absolutely freaking love it. He did all of the original art for the Specials and Two Tone Records in the late 1970’s/1980’s. 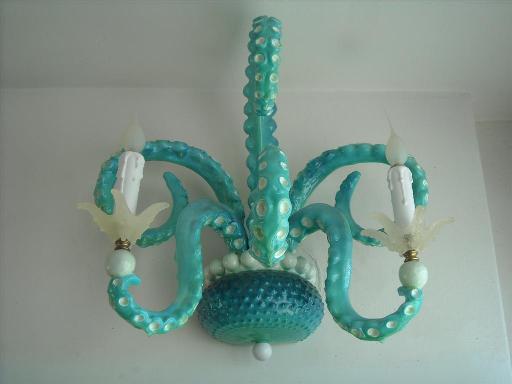 Who is at the top of your want list?
Cept. I have a handfinished prints. I want an original. 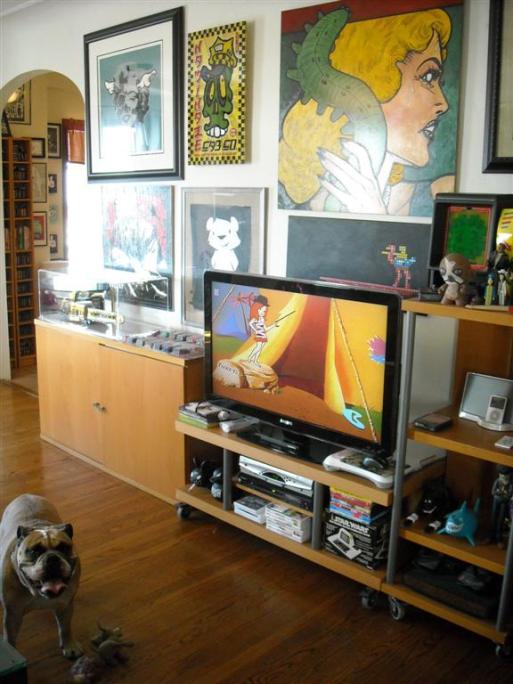 If you could add any piece of artwork to your collection, from any time period, which work would that be?
Banksy from 2002-ish. I realize I would appear mensa if I said Picasso or Chagal or something like that. But I am pop as shit. I make Britney Spears look metal. 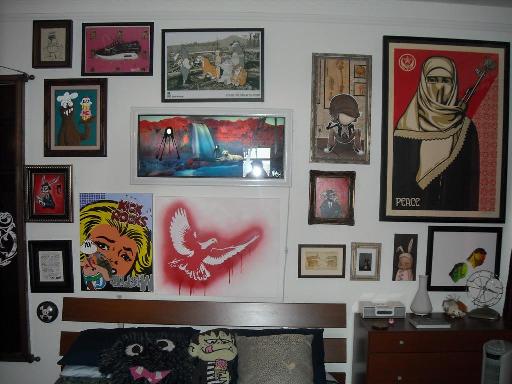 My wife and I would love to donate our collection to some sort of establishment, be it a museum or otherwise, so that the vision remains intact. We’re really creating a snapshot in time. With this in mind, do you see yourself ever stopping buying art and supporting artists? Even if your walls fill up? You are so young, that it’s bound to happen soon, but this is an addiction as we all know. So just curious of other’s long term plans.
I am a consumer. I am an addict of art. These pieces are my methodone. I will never stop buying. I put myself into debt now to buy a piece….I would have to be homeless, living off the land before I would stop. 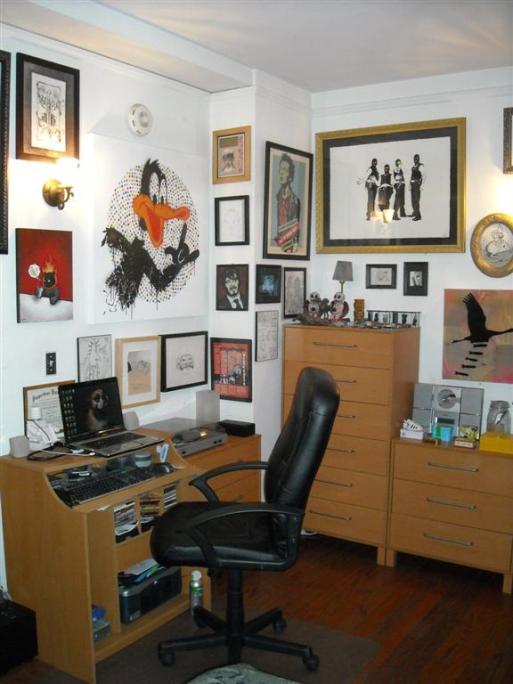 Please name an artist that might be off many collector’s radar, but that you enjoy and would like to offer some props to.
Cept, David Storey, Meggs, Joe Black, Miss Bugs, and Parker Jacobs 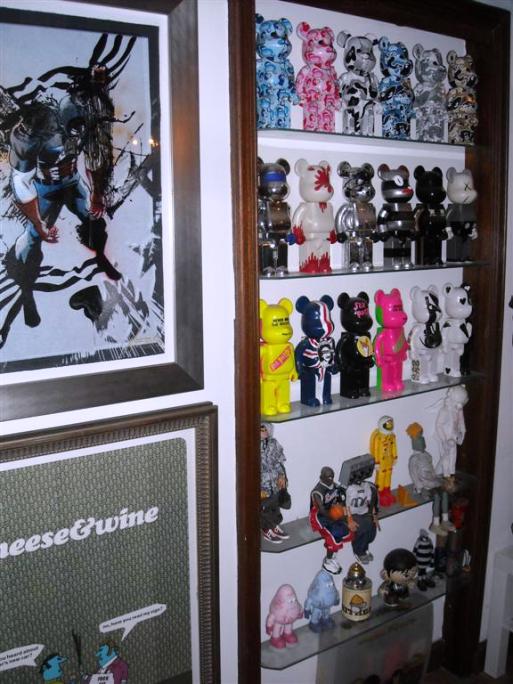 Any final words or shout outs?
Thanks to both of you and Thinkspace Gallery for existing… you have introduced an incredible amount of artists to Los Angeles.

* First photograph of Jon in the animal suit by Kevin Knight (http://www.theshutterclick.com)

5 thoughts on “An interview with collector Jon Halperin”