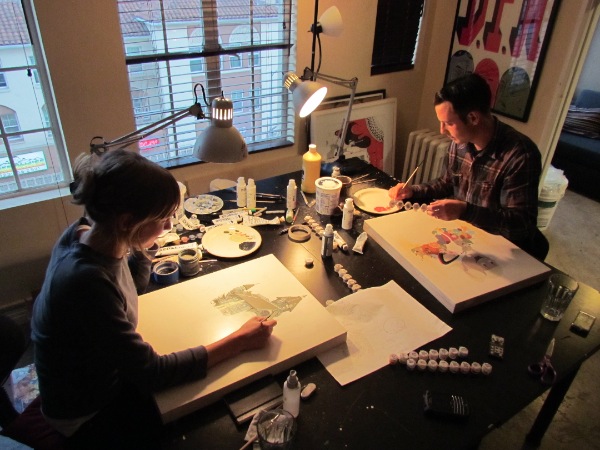 Melbourne natives Dabs and Myla are a dynamic duo who have lived, worked and soaked in the sun of Los Angeles since 2009. Dabs started painting graffiti in 1995, and began teaching Myla the ropes of writing about ten years later, after they met while studying illustration in art school and fell in love. Soon afterward, they decided they liked their collaborative pieces better than their individual work, and from that point on, they worked together exclusively, as Dabs Myla. Inspired by graffiti, food, travel and their wonderful chaotic life together as a couple, their paintings play Dabs’ mischievous and sometimes ribald characters off Myla’s photorealistic cityscapes. Since their move to California, they have never spent more than a few hours apart. They say, “I guess we are pretty lucky… two peas in a pod! Two crazy, workaholic, mad dorks in a pod! After years of living, painting walls and working together, we have only become closer, stronger and even more in sync. Every day we wake up, paint all day, and keep each other entertained with constant chatter and stupid jokes. Who could ask for more out of life?” 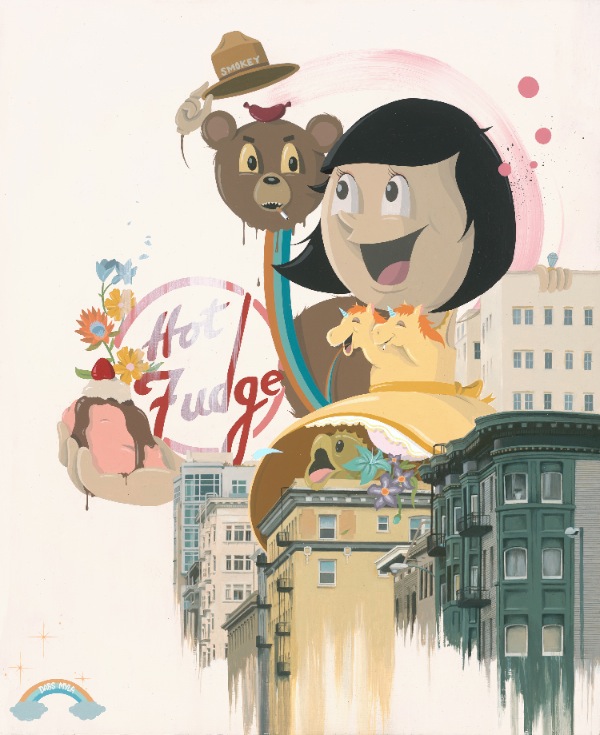 Can you share a lil’ bit about the themes behind your new body of work for ‘The Best Of Times’?

The body of work for this show is all about our time here in California. All the paintings are about us! Our life together as a married couple, as artists working together and our experiences in the U.S over the past few years. It’s all personal stuff. I’m sure when people look at the paintings they won’t understand all the themes, because they are illustrated in an abstract way and some are little personal jokes, but I think you can definitely get the feeling from them that they are about life, love and California! 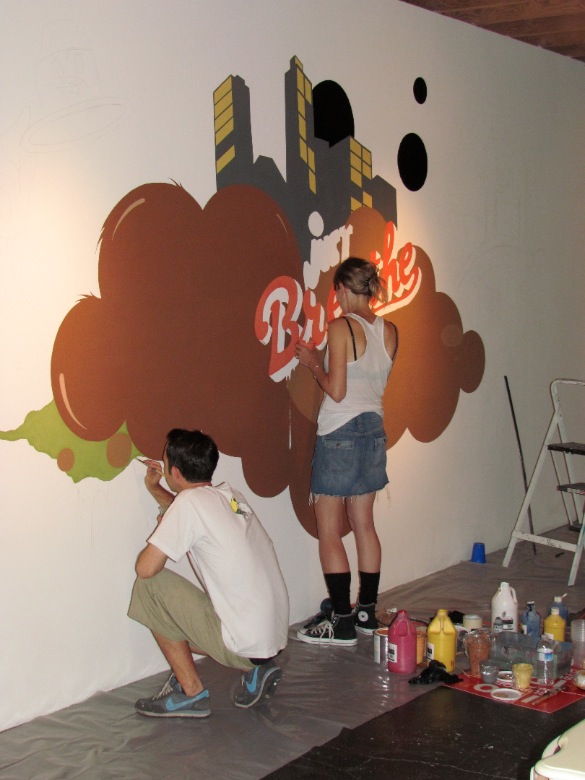 What fuels you both to keep creating?

Definitely each other! We both have a ridiculous work ethic, and thousands of ideas of images and things we would love to make! Even if we get tired we push on to get it all out of our minds and into the world! We both have the same drive for our art work. We are mad obsessive about it. 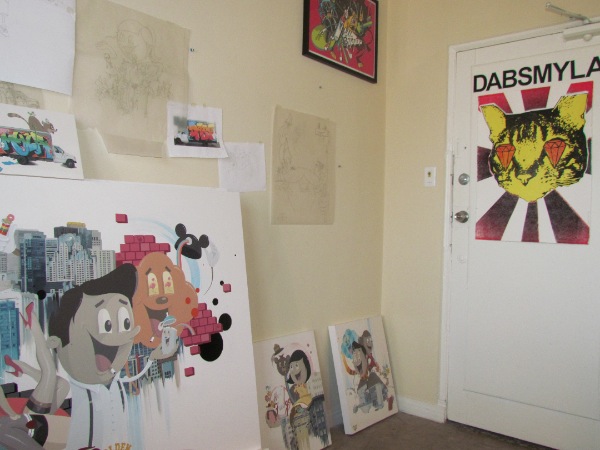 Please describe your dream project if time and money were not issues.

For this show coming up we have brought together a collection of many concepts and ideas that we have had over the past few years, things we would talk about doing but never get around to executing them, so I guess this show is a dream project for us!! 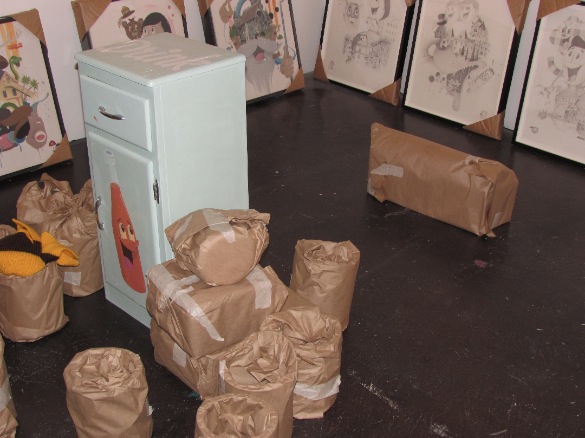 Favorite item in your studio?

It used to be the iPod, but now its our new member to the family/studio mascot our fish ‘Lil’ Amigo’!

Name the one thing you miss most about Australia past your family and friends? 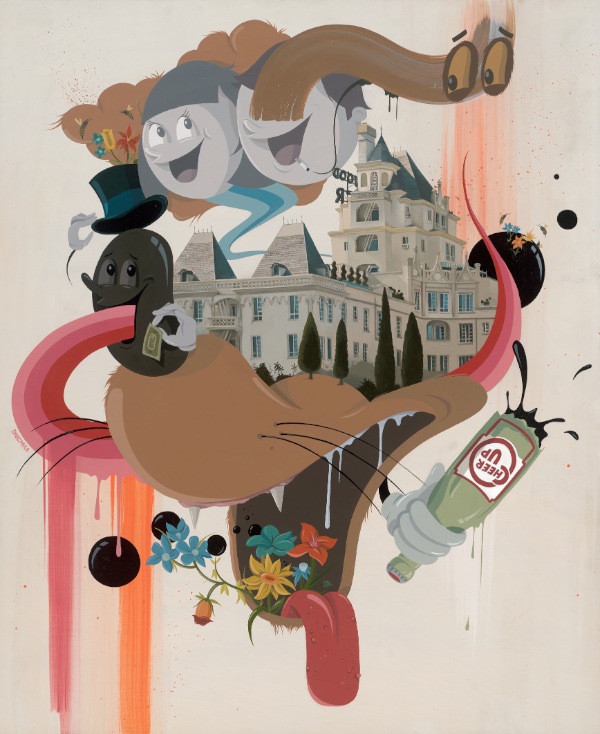 What’s been your most typical ‘LA moment’ to date?

It’s so hard to say, it seems that every day we see or do something that is SO L.A!! This city really lives up to its stereotypes! A girl roller skating down the middle of the street in a bikini, standing behind celebrities at the check out at Wholefoods, gunshots in the middle of the night!!…it just goes on and on! 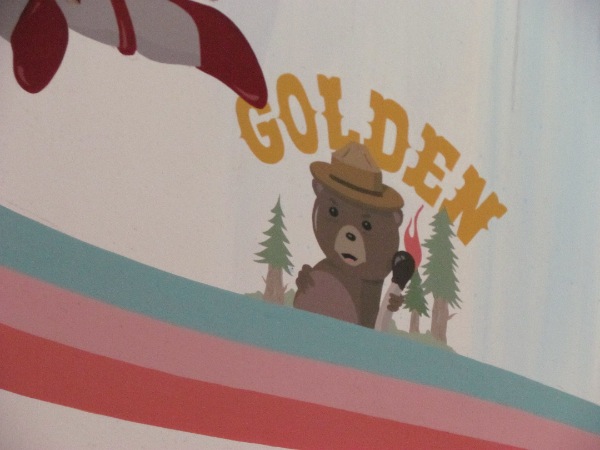 Is there anyone in particular, artist or otherwise, that you’d like to give a shout out to here?

Our friend SURGE from San Diego. We have known him since before we moved to the states, and he’s really just one of the best people out there! Whenever we spend time with SURGE we have a blast! We recently traveled back to Melbourne and Surge came with us…it was the best!! He is such an amazing artist, his paintings are great, he’s triple OG in the graffiti game, he has become a super talented tattooist and is a killer MC! There’s nothing this guy can’t do! 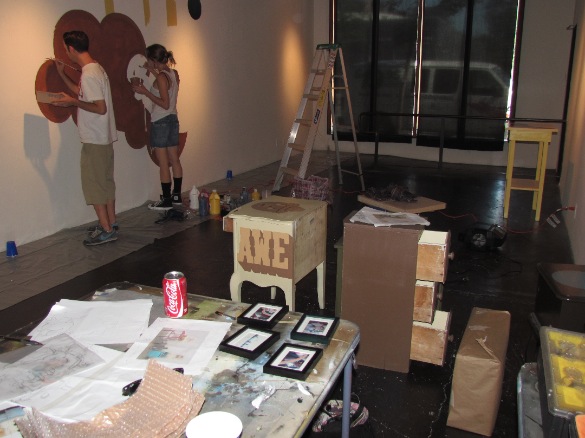 Any shows or special projects coming up after your exhibit with us here at Thinkspace you would like to mention?

We have a lot on after this show at Thinkspace. There will be no breaks for the rest of this year! After this show we are back in the studio working on a group show we are part of at the start of September in San Francisco. It’s a show made up of 12 Australian artists called ‘Young and Free‘. Everyone will have some paintings, and each artist will also be creating an installation for the show too! It’s gonna be a lot of fun for sure. But before we head up north for that, we will travel to Arizona to paint an installation for the ‘Impetus’ show that Thinkspace is curating at the University of Arizona, that should take about 3 days…then straight from there up to SF to start working on the Australian group show….then after this we have a lot of other things to conquer..but a lot of that’s on the DL for now…stay tuned though! 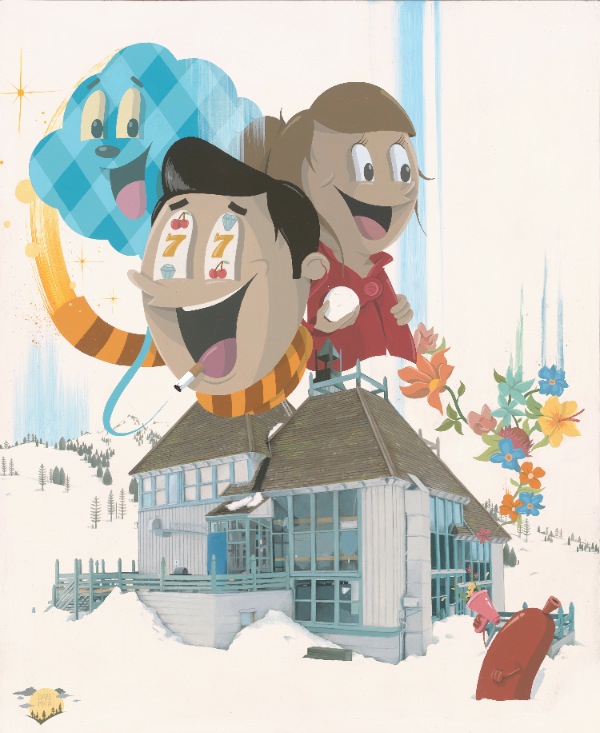 DABS MYLA ‘The Best Of Times’