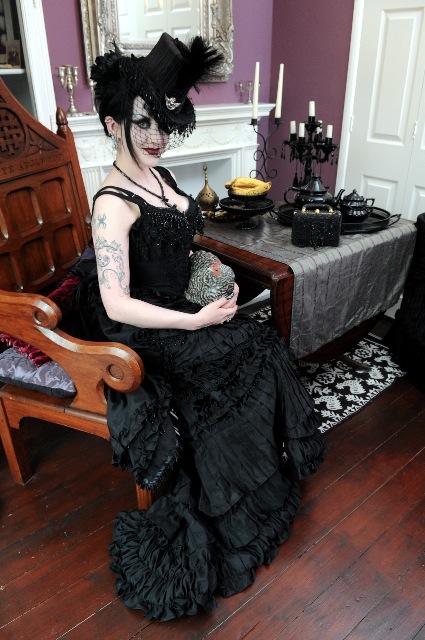 Emma Tooth is among the most exciting fine art portrait painters in England today. Born in Cambridge, now based in rural Derbyshire, she exhibits her breathtaking oil paintings all over the UK and abroad. “It is the creation of likeness which fascinates me; a glint of gold in the shadows, the flicker of an eyelid, the shimmering pulsation of nerves under skin. Likeness is always at the centre of my work; the almost mathematical relationships of feature to feature are just the beginning, but accuracy is essential. Alongside my painting I also make the historically-influenced costumes which appear in some of my paintings. This is a response, I suppose, to my restless discomfort with a soulless, mundane 21st century devoid of decoration or beauty or the magical promises made by a century of fantastical predictions. I look back to the costume and manner of the 1880s, to Symbolist and Pre-Raphaelite art, to Art Nouveau and Japanese imagery. Costume, masquerade and artifice are essential elements of my work, continuing my long-time explorations of self-image and self-presentation. There is a sense of escapism; most of my paintings are of a single figure, of a solitary moment, withdrawn from the rest of the world. I relish the glowing transparency and texture of oil paint and more and more I seek to create, as well as the overall image, a kind of macro-feast of surface texture which can only really be appreciated close up”.

Humans relate to images of of other humans, particularly faces, on a visceral, subconscious level; this is why portraiture is especially powerful and relevant. After layers of meaning and concept are stripped away, that relationship remains. Emmaʼs images can be very intimate and very personal, drawing on her own lived experiences of love, sadness and joy.

An interview with Emma Tooth

Can you share a little bit about your ‘Concilium Plebis’ series which we’re showing in Picks of the Harvest 2012?
Concilium Plebis is Latin for A Council Of The Ordinary People and it is an ongoing project I have been working on on-and-off since 2007. I found many of the models by just approaching strangers on British streets. The original idea was to take UK street-style – something often thought of as ugly, lowbrow or even frightening and find beauty in it, to encourage people to see art and nobility in unexpected places.

What fuels you to keep creating?
I want to make the world a little more beautiful.

Please describe your dream project if time and money were not issues.
I would like to take my work off the canvas a bit and perform actually! Maybe train to be a ballerina or a gymnast or something! I haven’t done ballet since I was a child and I’m still very flexible…

Favorite item in your studio?
My hens! And the beautiful easel my father made for me when I was a teenager.

Is there anyone in particular, artist or otherwise, that you’d like to give a shout out to here?
Yes, my husband Owen Tooth. He makes amazing films and he’s currently working on his biggest one yet – a film so scary I’m not even allowed to read the script!

Any shows or special projects coming up after your exhibit with us here at Thinkspace you would like to mention?
The Derby Museum and Art Gallery recently commissioned a new painting from me for their collection which is about to be unveiled, called The Captive. It is inspired by a painting in the Museum’s collection of the same title by 18th century master, Wright of Derby who I exhibited with in 2010.

Wright’s ‘Captive’, painted around 1775, shows a scene from Sterne’s A Sentimental Journey: a bearded man in the pose of Michaelangelo’s Adam, languishes in a prison cell having lost his passport. My new painting shows a young, tattooed man – a breakdancer actually – in the same pose, going to waste in front of his TV, held captive and lit by the utter banality projected from it into his room. The tattoo on his chest reads, “don’t count the days, make the days count”; the model really has that tattoo and I thought it sums up the sentiment of the picture perfectly. It’s something I feel really strongly about – it’s poison – just think what people, what humanity could achieve if they weren’t wasting their lives in front of the TV.

Look for three works from Emma’s ‘Concilium Plebis‘ series to be featured in our upcoming ‘Picks of the Harvest 2012′group show opening on Saturday, March 3rd.

One thought on “An interview with Emma Tooth”