Fumi Nakamura was born in December 1984 in a small town called Shimizu outside of Shizuoka, Japan. Fumi grew up surrounded by beautiful mountains and the ocean and this environment has had a lasting effect on her work. She moved to the United States just before her 12th birthday with her mother and brother. Fumi spent her middle school to college years in beautiful Northern California where she graduated from San Jose State University with a BFA Pictorial Arts degree in the fall of 2007.

Fumi currently lives in the New York City area where she works as a freelance illustrator and designer. Her work has shown the world over as well as taking part in the prestigious Semi-Permanent design event in Australia (2005).

An interview with Fumi Nakamura

● Can you share a lil’ bit about your new body of work for ‘Our Hands Will Eventually Destroy Everything Beautiful’?
“Our Hands Will Eventually Destroy Everything Beautiful” is an original developed series based on my past two series “Himitsu” and “Shapeshifter.” To put those two series in short, Himitsu means “secret” in Japanese, where I wanted to portray hiding my emotions away and getting rid of promises and detaching myself from others. “Shapeshifter” is a series on transformation – where I was experiencing some changes in my life (I graduated from college around that time and was “trying” to become more adult. The so called early 20’s crisis). While those two series were being worked on, I had a mental break down. I couldn’t draw anything for half a year. I was chasing after unrealistic thoughts and hopes during that year (that was miserable). Then one day, something inside of me snapped and I came to the realization that I need to move on and get rid of my “problems” – beautiful memories with someone I loved, childhood trauma, pains of growing up and literally everything since they were the core source of my regrets and grudges. It was weighing me down so much and I felt like I was suffocating. I had (and still do have) a problem with holding onto the past heavily to the point where it was making me so miserable. I wanted to change and stop running away from reality – in order to do that, I decided to “destroy.” So I can maintain pieces of life together, survive in a place called “life.” I became honest, out-spoken and decided to cut all the things out that are affecting me and my life negatively. People may think I am harsh, mean, insensitive and an intense person, but I want to survive and do something I want to do (and I sure do have lots to do!). And really, who really cares about what others think of you, we don’t really have time to be worried about that. Others are others. You are you. I am me! Just be nice to the people you care for and care about you. Only give enough that you can pass by. Either way, for me or to others, to maintain happiness and / or have a well balanced life, we all have to make some sort of a choice. Every choice contains some sort of consequences and we will hurt / be unfair to one another. Relationships and friendships are full of that. They can be beautiful and great, but it’s complicated because human beings perplex situations with emotions and thoughts. In the end, we are doing things for our own sake. We are selfish and greedy, and we can’t deny that. I want to create a series of images that capture every little moment, emotion and thought in life. I like to create a “collage” like image – pack them so tightly together to the point when you get close to the drawings and things will “fall apart”. I want to create something intense and fragile, just like how delicate yet complicated human beings are. Eventually we will destroy something beautiful and precious for something greater.

● What fuels you to keep creating?
The idea of possibilities.

● Please describe your dream project if time and money were not issues.
Publication project – I’ve been planning to start a publishing business for past 3 years. I am very interested in creating unique limited edition books and collaborating with other creatives. I have been talking and working closely with a printshop named “Marginal Editions” for the past few months, and we are discussing making some limited edition prints and they will also help me print. I want to collaborate with people who are talented and inspire me. If money isn’t an issue, I want to make many books, have a small store / printshop / cafe with my life partner.

● Favorite item in your studio?
A Mat Brinkman poster.

● Is there anyone in particular, artist or otherwise, that you’d like to give a shout out to here?
I haven’t been following art in general, but I have been listening to the new LP by the Norwegian band Alog.

● Any shows or special projects coming up after your exhibit with us here at Thinkspace you would like to mention?
Planning to work on a new series and concentrate on my publishing business (I hope). 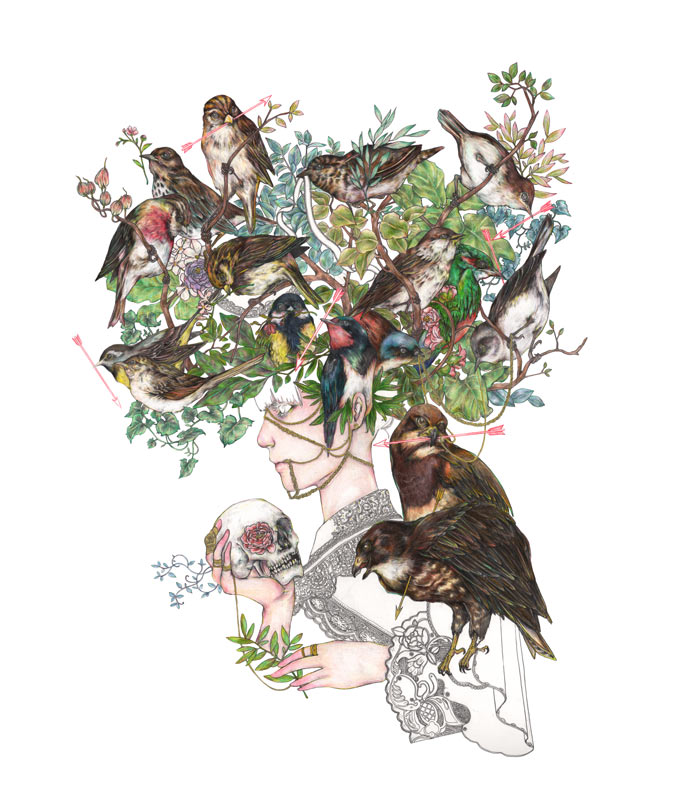 Fumi Nakamura
‘Our Hands Will Eventually Destroy Everything Beautiful’

Reception with the artist: Sat, March 31st 5-8PM in our project room

One thought on “An interview with Fumi Nakamura”