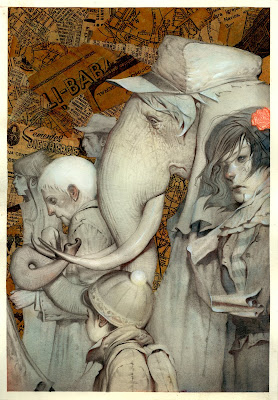 “Elephantman”
Pencil, watercolor, gouache and collage on 300gms Fabriano
An interview with João Ruas
Born in Brazil, 28-year old artist João Paulo Alvares Ruas was still a young child when his interest for visual art started to grow. Comic books were his first bridge to lines and colors, during high school much of his time was devoted to creative thinking due to the almost alternative education institution he studied under. Later, he took Design as his choice in University. After a three year stint in London, João went back to his home town, São Paulo, where he works and lives.
Mythology has always been a subject for arts due to the fantastic yet real features they capture of the human psyche. With this series of works, I will explore the subject once more, trying to establish connections between actions or situations and mythological characters that represent the many faces necessary to construct one personality. 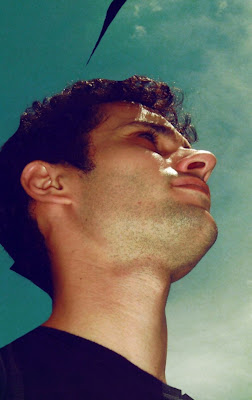 Portrait of the artist
Please talk a lil’ bit about the general idea/vibe behind your new series of works for “Inner Myth Pt. 1”.
Basically, if you look back into pretty much all the periods of Art, there is a connection between artistic production and mythology at some point or aspect. With series of works, I want to create my own point of view about some of these myths and create bridges that connect us and our time with those multi-faceted stories and characters.
Since the show’s title is “Inner Myth Pt. 1”, do you plan to continue on with the “Inner Myth” series? Is so, in what way?
Yes, of course. I want to go back to this again in the future. The theme is so rich and complex that I can see myself painting mythology in 10-20 years without being bored or out of ideas. It isn’t like I will paint only about this, but I will surely do other chapters. 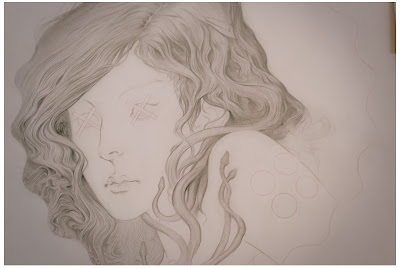 When are you most productive / when do you normally work on art?
Afternoons and early nights. I am not a morning person and definitely I am not a fan about working late at night either, I only do it when it’s extremelly necessary. 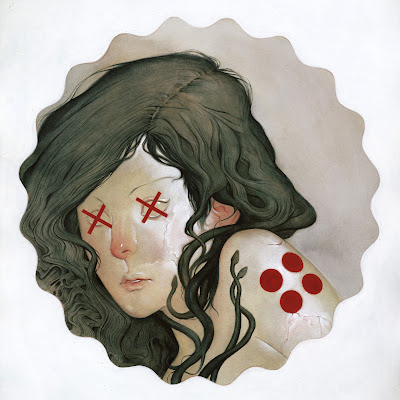 “Gorgon”
Watercolor, Gouache, Acrylic on Heavyweight Fabriano
You currently reside in São Paulo, Brazil – being so disconnected from the art world at large – do you feel this helps in any way to influence your work?
Well, I guess I am disconnected from the art market, but not from art itself. There’s a lot of visual production going on in São Paulo, in many fields. Of course, it’s a smaller scale, but I don’t feel I am in a desert by no means
You spent three years abroad in the United Kingdom. Did this time away from home influence the current direction you’ve taken with your work in any way?
Yes, definitely. It really opened my eyes. I started to see the world in a different and more open (and yet simple) way. I discovered that people are the same no matter what language they speak, what food they eat or what customs they have, these are all details. We all have weaknesses and desires that obey no frontier. Before living there I used to see the big world outside my little world as a monster ready to bite my head off. 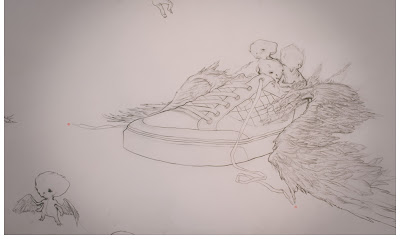 “MRCR” process shot
For those new to your work, can you give us a lil’ background on where you are aiming to take your work and what you hope viewers gain from it?
Basically, I want to constantly experiment visually and yet keep a nostalgic feeling to my work. It’s a contrast, and my idea of creation is based on that purely, contrast and equilibrium. I don’t know if viewers can gain anything looking my paintings, but I want them to discover their own ways through the layers and maybe find something really meaningful to them.

You just took over the illustration gig for the creation of each new Fables cover. Following in the footsteps of the one and only James Jean, has to be a daunting task. From what we’ve seen thus far, Fables’ fans have really embraced your work. How did it feel when you got the call that the gig was yours?
At first I gotta say I sincerely didn’t want to do it because I knew my work would be instantly compared to James’, I was afraid to get a stamp on my forehead and pretty much destroy my almost unborn career. After a while though, I thought I needed to do it for myself really, to prove for me that I could handle that pressure otherwise in the future it could turn into something that I would regret forever. So I accepted it and I am simply treating it as a job, a very important one, yes, but I try to ignore that pressure. 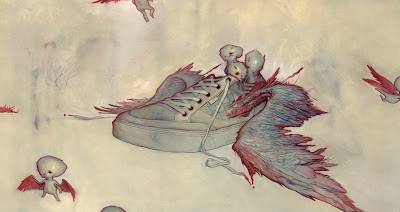 Tell us something about yourself that someone would never guess in their wildest dreams.
I seriously considered studying Geography in college.

Are you reading anything right now?
I bought this old used book called “Marvels of the Russian Novels” and it has short unknown (for me) stories from all the good ones, Gogol, Dostoiewski, Tolstoi, Gorki, etc.

Do you listen to music while painting/drawing? If so, do you have a current favorite that inspires?
For me that’s essential. My favorite bands are all from the 90’s, but I am really into the last Bat for Lashes album. 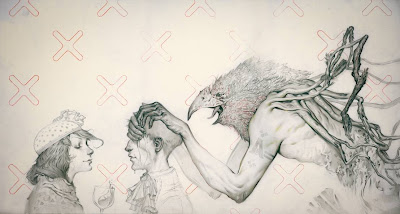 “Tengu” process shot
If you had to explain your work to a stranger, how would you do so?
I would say it apparently has surrealistic elements, but nothing is random. It is like a scripted dream.

Favorite artist (living or dead) and what makes them special to you?
My all time favorites are Degas and Klimt. Degas for his deep opinions about painting and obviously his masterful work, and Klimt for his constant explorations without any prejudice. 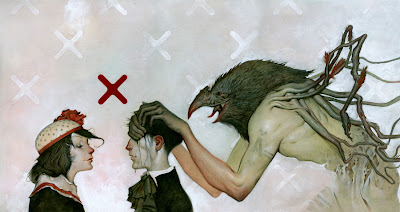 “Tengu”
Watercolor, Gouache, Acrylic on Heavyweight Fabriano
We are very much looking forward to having you back next spring for a proper full show in our project room. What have you got coming up in the meantime in terms of shows after “Inner Myth Pt. 1”?
Well, I may show a couple of pieces in Europe later this year and another couple in december at the Art Basel with you and a full series next year again with you guys.

I wish I could say something cool but I will only go to bed get some sleep.

For a great read on João’s background, check out Erratic Phenomena‘s write up here.

We posted this earlier in the month, but just in case you missed it, Sidebar Nation posted a great podcast with João recently, check it out here.

View shots of the piece “Enkindu & Gilgamesh” coming together for this May here.

Additional behind the scenes shots of João’s work can be viewed here.

Last but not least, keep up with João via his site here.