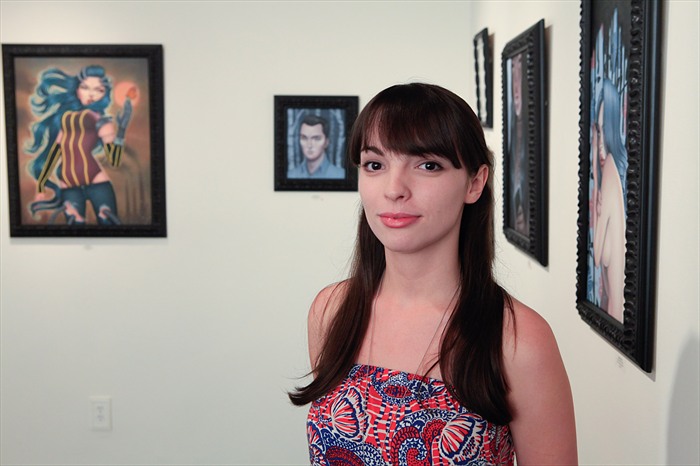 An interview with Sarah Joncas

Can you share a bit about your new body of work for ‘Between Wind and Water”? What do these new works represent for you?

Unlike many of the larger shows I’ve done in the past, I decided to go into this body of work with no particular theme in mind. I also decided I’d keep my planning for the show to a minimal, just painting and letting ideas stir as I got further and further into it. Since I tend to work on 8-10 pieces at a time, I did find some similar ties between them and emphasized ideas as I went along.

For me, I see this work symbolizing change and transformation though. Destruction and renewal, sexuality and identity… An emphasis on character both vulnerable and powerful. Not every piece plays to this, often I simply love the look of an enigmatic face, but I can see now how my afterthoughts about the work have started directing me in my newer sketches still. I think it’s necessary sometimes to just let go and see where things take you.

We’re often asked if the female character in your work is intended to be yourself and I know sometimes that is the case. Would you care to talk about this a bit?

Yes, I get that question all too often. To be honest, I don’t intend self portraiture unless the title suggests it, which is few and far between. I think maybe when people say ‘self portrait’ they simply mean the painting looks like me though. When we were asked to make self portraits at OCAD, students would come in with abstracts and far less straight forward ideas of what the self meant… So, though I can admit the resemblance of myself to my girls at times, I don’t actually see myself in these paintings. Trying to analyze it objectively, I did grow up learning to draw from my own face though, I spent a lot of time alone, I’ve never used models and my whole family looks a little alike… I often think of these paintings to be more like alter ego’s instead, or my way of acting out ideas and feelings that concern me. I’m a very quiet and reserved individual, so in a way, I also find these paintings to be manner of breaking free from that restriction, playing out characters that are bold, moody, angry, powerful and unapologetic. I guess I’m as much a self portrait artist as Cindy Sherman was, or as any actor should be considered. Obviously your empathy and ability to express certain emotions truthfully comes from an inner experience, but it’s a tool, not the story. 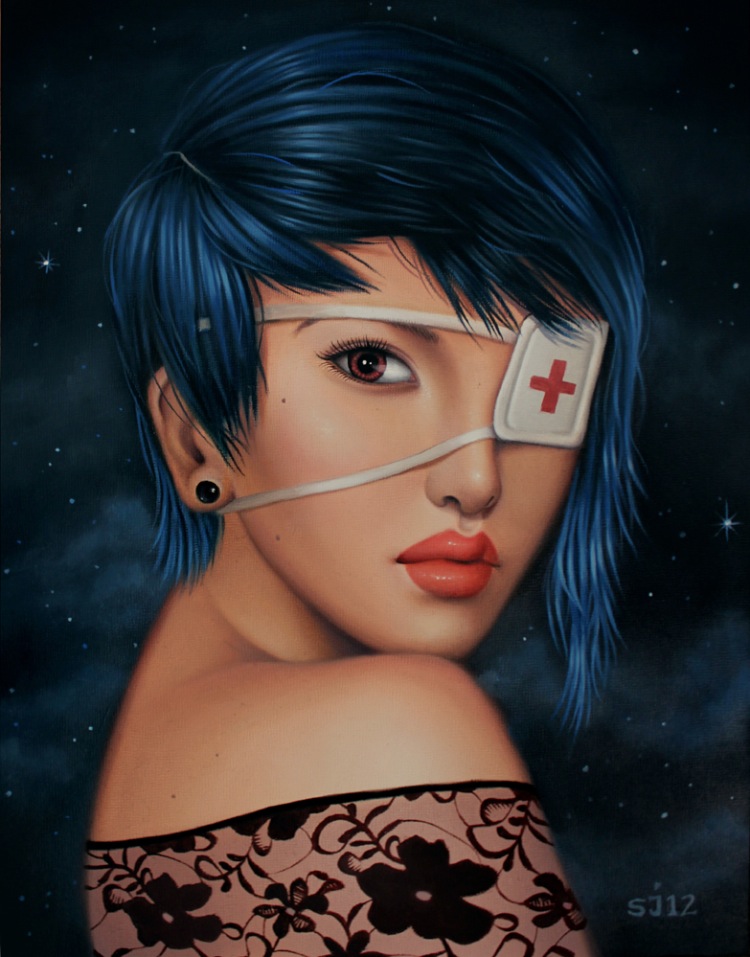 What fuels you to keep creating?

Simply that it makes me happy, but also just the continual emergence of ideas for painting. Creating becomes a way to express beauty and find understanding, which makes life much more meaningful.

Please describe your dream project if time and money were not issues.

I’ve dreamed of being able to make a book of my own someday, since I was little. Either a graphic novel, storybook or children’s book. I have no ideas for one as of yet, but imagining an end product with pages of illustrated work and a well thought out story… Such a huge feat, and I really would need so much more time and money to set things aside and complete it. Even if it were a book of themed poems with illustrations… I made a simple version of something like that in high school.

Favorite item in your studio?

My cats! Not really an item, but I love those little guys far more than any of the ‘stuff’ in my studio.

If you were to take us out on the town in Toronto, what might we get up to?

More than anything I love just walking around Toronto. But we’d have to check out the AGO, Second City and the Harbourfront. It’s fun getting out to Toronto Island at night to see the sun set over the city, as well. There’s just too many good restaurants to choose from, so lunch and dinner would be necessary. In the winter, skating at Nathan Phillips is fun and getting on top any building with a roof top is a great way to view the city!

Is there anyone in particular, artist or otherwise, that you’d like to mention here?

No one in particular, I think… I’m not really sure how to fit anyone into a conversation like this, but I suppose I’m always thankful to my BF who has to put up with my craziness and worry while developing a body of work for a show like this! I try to pry opinions from him about the paintings and what he thinks I could improve, which makes him uncomfortable, haha.

Any special projects coming up after your exhibit with us here at Thinkspace you would like to mention?

At the moment, just getting in more group shows and I’ll be working on a new solo body of work for December at the Last Rites Gallery in NYC. I will also be participating in a project that can’t be mentioned at this point, but it should be pretty exciting! Will post all about it come due time.

‘Between Wind and Water’ on view through this Sat, June 30th at Thinkspace

One thought on “An interview with Sarah Joncas”