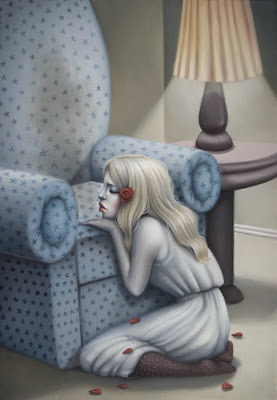 An interview with Sarah Joncas
Sarah Joncas was born in 1986 and grew up within both Hamilton and Niagara Falls, Ontario. Her interest in the visual arts developed at an early age, starting with the dedicated drawings of dinosaurs and lizards. Eventually the study and enjoyment of working from existing images stirred up the need in Sarah to create images of her own; ones that could reflect the world, yet also appease the personal feelings/ideas that she herself maintained. With this, her direction changed gradually from the world of animation, towards a path in fine art. Sarah is currently working and finishing up her BFA at the Ontario College of Art and Design, in Toronto. 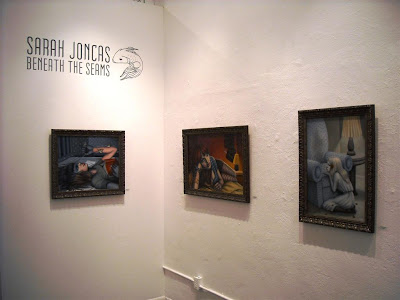 Progress of ‘Beneath The Seams’ coming together…
“Ultimately, I used this show as an opportunity to push my portraiture into a realm that involved more consideration of narrative. Though there are still some smaller portrait pieces included, I’ve used the larger works to develop these intentions.” – Sarah Joncas 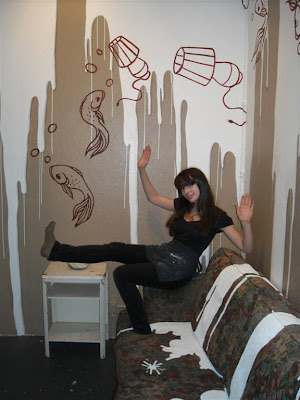 Sarah Joncas in the middle of her installaton
Please talk a lil’ bit about the general idea/vibe behind your new series of works for ‘Beneath The Seams’?
I used this show as an opportunity to push my portraiture into a more narrative realm, referencing cinema/noir as a way of dramatizing and constructing the pregnant moment. Working with my usual atmospheres of anxiety and melancholy, I wanted to turn vignettes of the private-mundane into spaces more haunted. The actual title, ‘Beneath the Seams’, was inspired by the phrase “Behind the Scenes” – that kind of cinematic voyeurism, looking into the private-interior. I like the drama of settled name though, and the word ‘seams’ since it felt a little more intrusive, like peering into something meant to be closed. It also sounds like ‘seems’, which is another curious ambiguity. 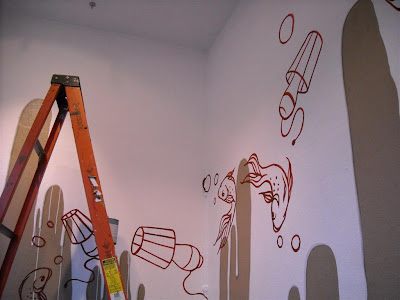 Progress of the installaton for ‘Beneath The Seams’ coming together…

You recently completed your final semester of school and only have a couple classes left overall – how does it feel to be finished? What’s the single most important thing you feel you learned while there?
I actually feel very mixed about everything right now; excited, nervous, ambitious, confused… All, probably normal! I’ve wanted to be out of school so bad for the last 4 years, mainly because I was unhappy with my courses, but this final (full) year was a real turn around. I met a lot of great people, made good progress in my work, and for the 1st time had profs who seemed sincerely engaged with my crits… I had gotten threats about being labeled as illustrative previous to even entering thesis, but what I got was quite the opposite and surprisingly open minded.
I think the most important thing I’ve taken from school had nothing to do with my academic education though, but rather in maturing and taking on challenges. No matter how much people hate hearing the cliché ‘hardship builds character’, it does. I wouldn’t have learned nearly as much about myself if I decided to stay comfortably at home. 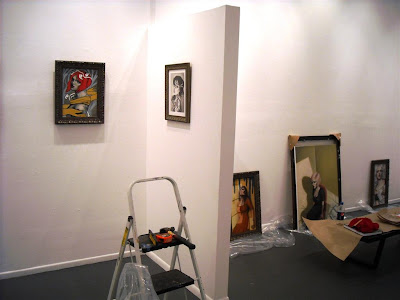 Progress of ‘Beneath The Seams’ coming together…
Your new works for ‘Beneath The Seams’ feature a marked growth in the use of narrative that really help add new life to your paintings. Care to comment further on this aspect of your work and perhaps talk about a piece or two from the new series?
Before planning any kind of thematic approach to using narrative in these works, I just knew I wanted to push myself in an area I wasn’t quite so great or comfortable with. Looking at my older works, the one thing that always seemed lacking to me was the environment I placed my girls in – was so focused on the figure that I neglected what setting could do for it all. As far as talking about individual pieces, I’d rather keep it general and say my narratives really just come from a culmination of everything in my life; personal, cultural, social… All that good stuff that makes up our little world. 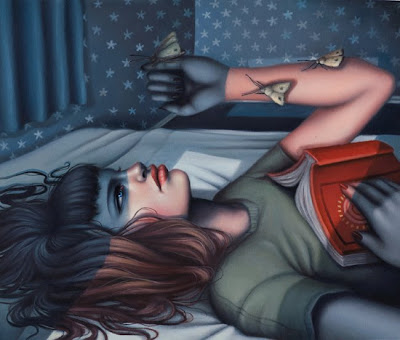 “Intermission” / 20×24″ / Oil on canvas
I know you are a huge music fan. Do you have a current favorite that inspires? Favorite band overall – new? – old?
No absolute favourite, but many. I wouldn’t claim myself to be a music geek either (since I don’t obsess), I just really love my tunes ~ find a lot of comfort and inspiration in them! This past year has really been about listening to movie scores for me (Virgin Suicides, Fight Club, Blade Runner, Requiem, Donnie Darko etc.), but rock and alternative music are probably my favourites. Adore Radiohead, Portishead, P.Floyd, Led Zep, APC, Tool, Air, Beatles, Velvet Underground etc, etc… I’ve been really into Bat for Lashes the past year too. Tending towards more mellow stuff lately. 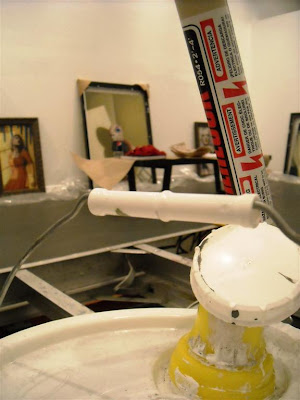 Progress of ‘Beneath The Seams’ coming together… 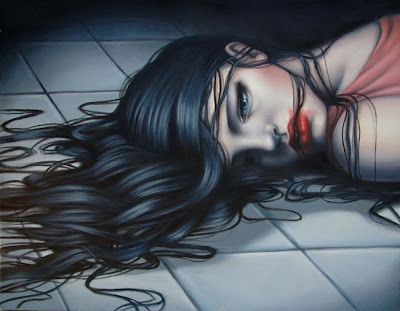 “Stroke of Midnight” / 14×18″ / Oil on canvas
If you could stand by and watch the creation of any piece of artwork from over the years, which would it be and why?
I’ve never thought about that one? I’d feel a little weird watching over someone’s shoulder like that, to be honest (and jealous because I’d want to be painting too!). I’d love seeing any of Joe Sorren’s pieces in evolution though. He had some stuff on his blog awhile back showing the steps taken with one piece called “The Overture”– started out as this lovely abstract, and slowly came into focus as this amazingly intricate and lush wonderland… I am absolutely in love with his paintings! 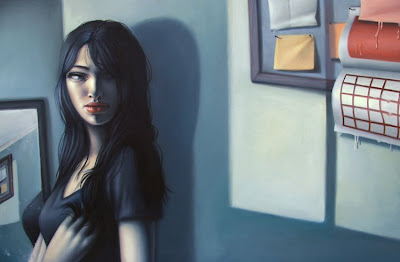 “Paper Trails” / 24×36″ / Oil on canvas
What do you consider your biggest overall influence?
Hmm… Life? Haha. Yep, that’s a big one!
What have you got coming up in terms of shows after your solo show with us? We are already looking forward to showcasing you this December during Art Basel.
Until Art Basel, I’ll be off the radar for a bit, but I have a solo coming up with Roq la Rue in February, will be in a show at m-modern for April, and then am back with you guys here at Thinkspace come next September. So, in between all of that is a whole lotta good ol’ painting! 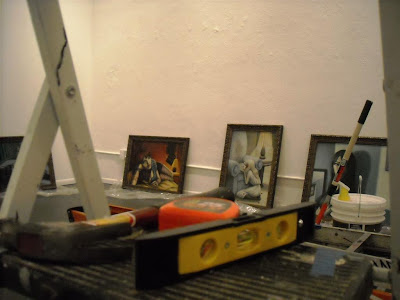 Progress of ‘Beneath The Seams’ coming together…

You’ll be in town for the opening reception, any shout outs for your west coast fans? Any plans while in LA to get out and do some touristy stuff if time permits?
Oh yes, definitely come out and say hi at the opening night! Always a pleasure meeting everyone and it’s not an opportunity I get very often being a full country away!

On the tourist stuff, I’m not so well informed as to what people do there? Not totally interested in the whole ‘sidewalk of stars’ business, but I definitely want to see some art. The ocean again, too! Maybe check out ‘Whisky A Go-Go’. Someone told me I should get to Topanga Canyon if possible… Hey, send me must-see tips in the comments, if you got them! 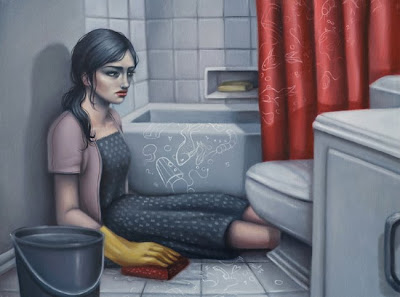 “White Noise” / 18×24″ / Oil on canvas
Hi-Fructose recently posted an interview with Sarah as well conducted by CommandaX of the Erratic Phenomena blog here.

As did Juxapoz, their ’20 Questions’ feature with Sarah can be checked out here.

Peep the ‘Sneak Peek’ set for the show here.
View all the works from ‘Beneath The Seams’ here.
If you see anything you would like to discuss further, please don’t hesitate to shoot an email to contact@sourharvest.com and we’ll follow up with you right away. Sarah’s really taken her work to another level with this show, we can’t wait for all to see them in person this Friday, as the size of the works really needs to be seen to be appreciated.
Sarah Joncas
‘Beneath The Seams’
Opening Reception: This Fri, June 12th 7-11PM
Thinkspace
4210 Santa Monica Blvd. (near Sunset Junction)
In the Silver Lake area of Los Angeles / #323.913.3375
http://www.thinkspacegallery.com/