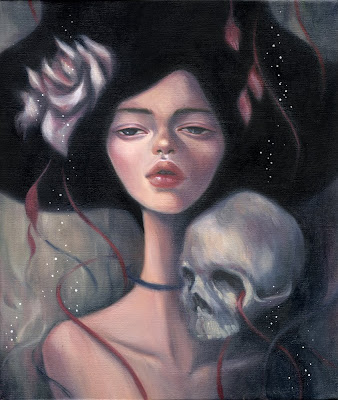 An interview with Stella Im Hultberg
Please talk a lil’ bit about the general idea/vibe behind your new series of works for “Memento Mori”?
I think i was thinking about dualities – being that “memento mori” means “be mindful of death”,
there being death, thus life, how they have a little bit in each other. like ouroboros, the snake eating its own tail.

it seems to be the case with many opposites – female and masculine, light and dark, yin and yang. i’m interested in the identity that gets lost or found in the penumbra where the dualities get obscured and overlapped. bones and flowers are similar that way, they seem to contain both immense frailty and amazing strength, so i keep coming back to them – same with female body. 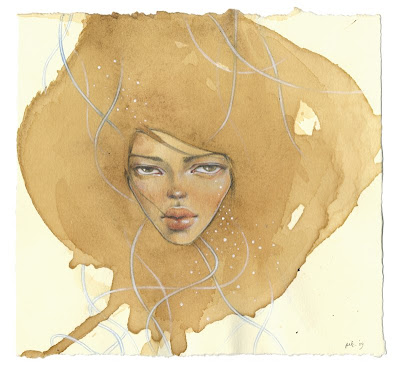 I know you are a huge music fan. Do you have a current favorite that inspires?
Lately i’ve been more inspired by npr podcasts – mostly radiolab and this american life. it makes me feel a little less isolated from the world, it seems. looking at my playlist and what my husband matthew has been playing, recently there’s more of the kinks, the zombies, blonde redhead, sugarcubes, the pixies, radiohead, and the yeah yeah yeahs. 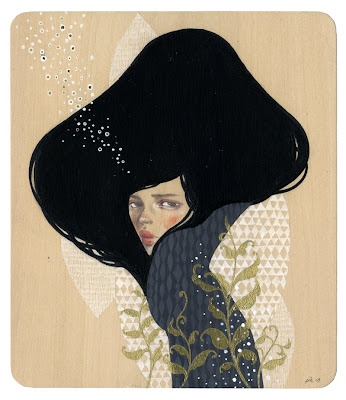 If you could stand by and watch the creation of any piece of artwork from over the years, which would it be and why?
I’m sure i’ll feel differently at a different time, but lately i have goya lingering in my head. if i had to choose one, it’d have to be one of the black paintings on his walls. 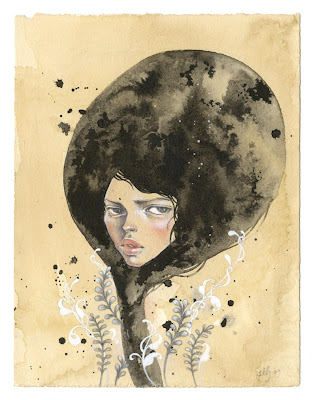 What do you consider your biggest overall influence?
To be really broad – it’s people and their relationships – relationships with each other, to the world, to their lives. an artistic overall influence… has to be egon schiele, because after seeing his works in person my perspective on art has changed forever. 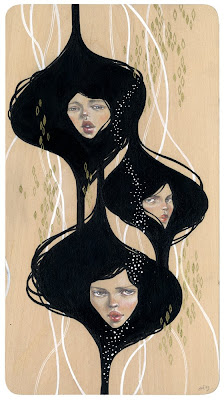 Please describe your perfect day out in Brooklyn.
A perfect day here would not be without bike rides – and coffee, drawing, friends, picnic by the river, hopefully ending the night at a rooftop party. 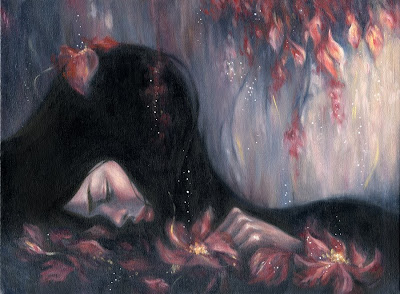 If you had an unlimited budget and time was not an issue, what grand artistic vision would you look to bring to life?
i don’t think i ever though up that grand a vision that would need so much budget and time, although that would be quite nice. plus in new york city, space is more of an issue. 🙂 but the closest i can think of is… i have been dreaming of building something huge – a really large scale sculptural version of my paintings, maybe – it could even be an enormous painting. an installation of sorts. it’d be fun to convert an entire space into a giant piece of art.

also, i don’t know if this counts, but it would also be really nice to set up an after school art program for inner city kids. i think funding is the biggest reason why programs like that have a hard time sustaining. 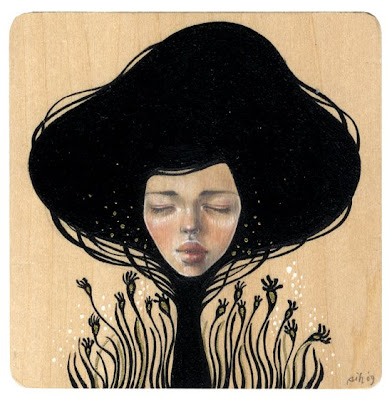 Your debut NYC solo show is next summer at Joshua Liner in the Chelsea district. Any big plans for this important show?
Unfortunately i haven’t planned the specifics that far ahead – but i have timidly started some larger canvas paintings, so if these go well, i think it may be shown at the show. hopefully with even larger pieces as well. i hope i can get them out my door. i also would like to put some sculptural works as well, so i must start early. 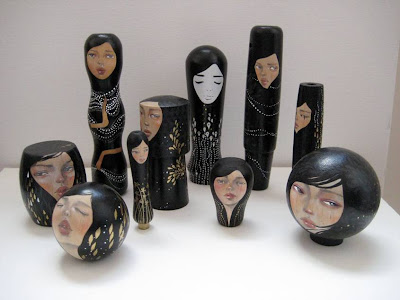 Check out a sneak peek from the good folks at Arrested Motion here as well.