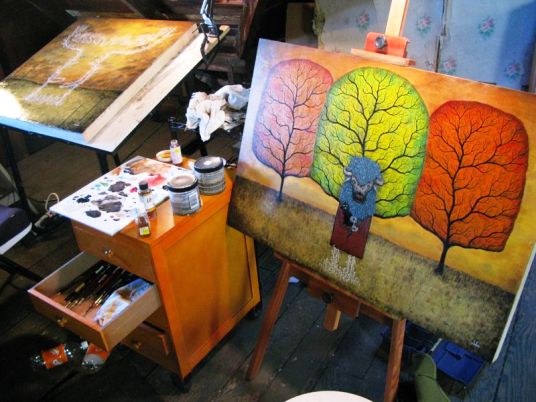 One of our favorite people and favorite writers just did a very in-depth interview with Portland-based artist Andy Kehoe whose upcoming solo show, The World Unseen and Those In Between, is coming up this December at Thinkspace.

“The World Unseen and Those In Between is a show about the unseen spirit world and invisible forces that exist all around. It’s been fun creating an even stranger and more mysterious world around my already pretty strange world. I’ve been playing around with ghosts and spirits in previous works, so it’s been great dedicating a whole show to it.” – Andy Kehoe

View a set of pics from Andy’s studio here.

Andy will be in town from Portland, so please mark your calendar now to attend the opening kick off on Fri, Dec. 11th and watch for an interview with him to be posted here soon as well as a short interview over at Juxtapoz.com (we’ll post a link to that too once up).