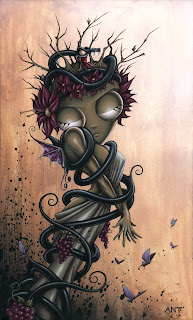 Anthony Clarkson “The Black Goddess”
Acrylic on wood (sneak peek from upcoming show)
Anthony Clarkson is busy putting the finishing touches on his upcoming show with us, ‘The Silent Treatment’. Clarkson’s art has been showcased in several galleries in the United States including Thinkspace, DvA Gallery, Gallery 1988, Cannibal Flower and Copro/Nason. Clarkson was also featured in the ‘Intersections’ show at the Cypress College that took place during the spring of 2008.
As part of ‘The Silent Treatment’, Clarkson will be issuing his first print. ‘The Organ Grinder’ (shown below) will be available opening night as a limited edition giclee print. More details will be announced soon… 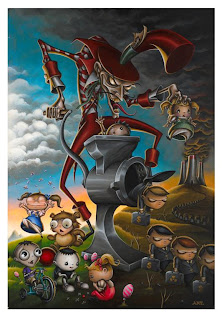 Clarkson’s vision continues to expand as his paintings evolve into more intense expressions of his own dark thoughts. ‘The Silent Treatment’ serves as his debut solo exhibition and one that’s sure to get folks talking – we’re super amped for all to see what he’s been working on for the past several months…

‘The Silent Treatment’
Opening Reception: Fri, Feb. 13th 7-11PM
In our project room (Amy Crehore will be in the main gallery)
Thinkspace