Headed out this past Saturday, Aug. 16th to hit up six shows… we made it to five of ’em. Below is a lil’ breakdown of the night’s adventure… 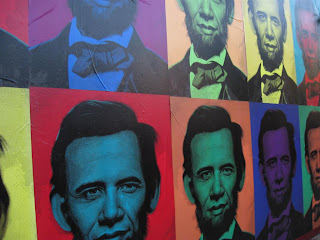 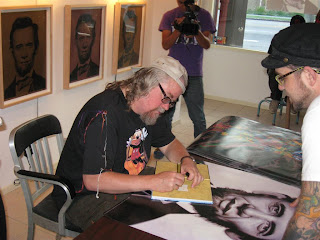 Ron signed for fans and collectors for well over three hours and they had two great new low-cost prints on hand to purchase and have Ron sign, as well as all his books and recent vinyl figures. 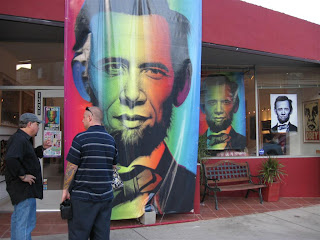 Saber chats with gallery owner Robert Berman out front of the event. Took a second to say hi and then it was off to the next event… 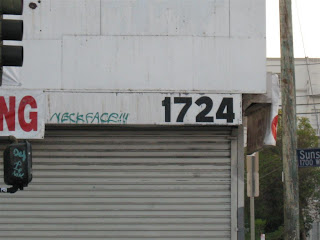 While on the way to Black Maria Gallery, we saw evidence in Echo Park area that Neckface was indeed in town… more on that later. 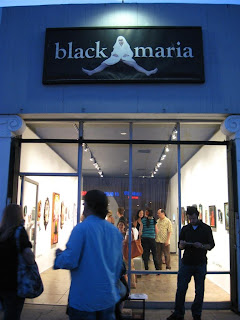 Arrived to Black Maria Gallery rather early, so the turnout was still pretty mellow, but the works on view from Jennybird Alcantara and Craig LaRotunda were beautiful. Having worked with both in the past, it was nice to see the display of new works. Both were super deep in conversation, so didn’t get a chance to say hey (sorry guys, we had five shows still to hit… hope the night went well for you both!)… 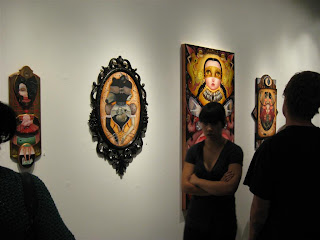 Jennybird’s wall of works above. 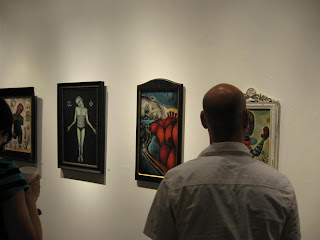 Craig LaRotunda’s wall of works above. 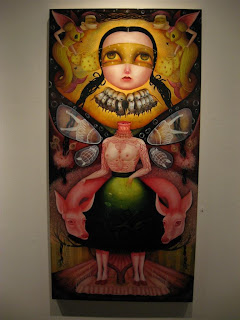 Above is Jennybird’s showstopper… epic piece with so much detail. Worth the trip alone to see this, she’s really getting tight. 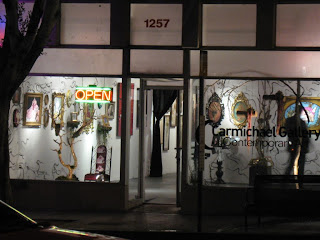 After that it was off to LaBrea to hit up Seth’s new show at Carmichael Gallery. As you can see above, the front of the space is pretty intense right now as a couple weeks back they hosted the opening for Amana Lynn’s new show… but we were there to take in their new show in the back gallery “You’ve Been Wasting Your Time” with Other, Hush and Flip. Most of Other’s works were lost in the mail, which was a huge crusher to hear, as we were so looking forward to seeing his new large works, but he did have a nice selection of smaller works that didn’t get lost in the mail on view in their office area… Hush made it into town and did a nice series of new works (his wall of works is below). 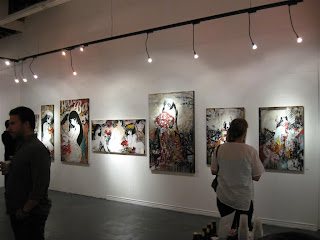 Close up of one of Other‘s new smaller works below… love the detail and insanity in each… he’s touched to say the least, and I mean that in the best way possible. He’s always out with Labrona, and given how much Labrona has taken off in recent months, Other is one you should have your eye on. 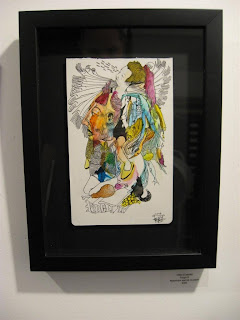 After taking in the new works of Other, it was time to head over a couple blocks to catch the insanity that would be Neckface’s new show at New Image Art Gallery over on Fairfax… as you can see below, this was one of their biggest openings in some time… the crowd spilled out of the front and filled up the entire block almost. 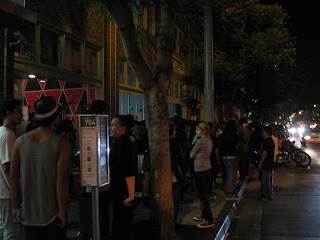 The new works were just amazing, with a killer crazed clown theme running throughout each. 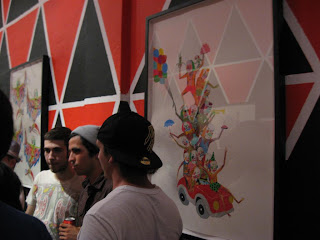 The whole spot was painted up in this twisted red and black triangle them that really set the new works off and added to the overall crazy vibe… which was all caped off with a full on skate demo going off in the back of the gallery (see pics below). You had to be there, but that was so over the top and confined, sweaty, loud and just plain nuts – who’d have ever thought inside that lil’ space you’d get to see a full on skate demo taking place in a caged in arena!!! 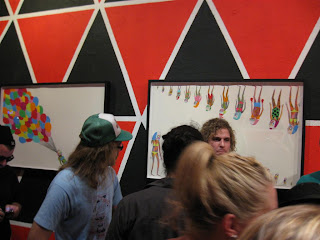 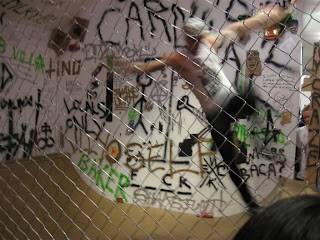 Inside ‘the cage’ it looked like a rundown skate park from the bad side o’ town complete with all sorts of craziness scrawled on the walls by Neckface and his pals. 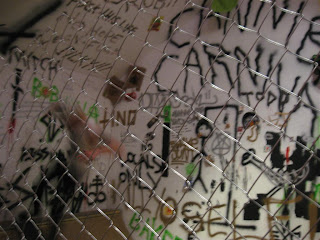 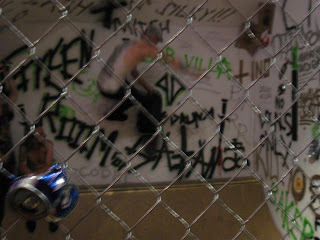 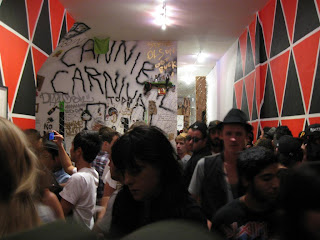 The view upon entry… totally packed and hot as hell… see the skate cage in the back?!?! 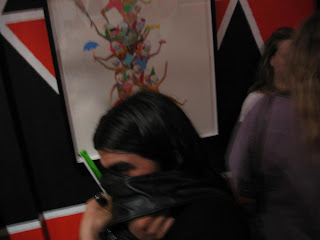 Nasty Neckface makes a rare appearance (see above)… in his hand, the cherised green wristband to the after party over at the bar adjacent to Cantor’s… yeah, the deli. Crazy huh? Who’d have thought you’d choose that place for an afterparty… sadly, I got a wristband, but there was no way I was going to be making it over there at midnight to hang with that batch of lunatics… I’m sure someone ended up in jail that night. 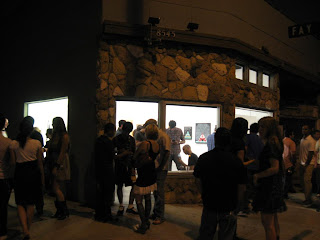 After that insanity, it was time to head over to Culver City to take in the last two shows of our planned adventure, sadly we missed the Lab 101’s opening, but arrived to see Project: going off (see above)… nice turnout for the FUN crew… 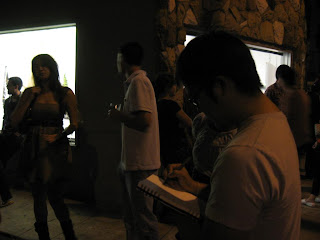 Rising Star Tessar Lo gets busy in our sketchbook… 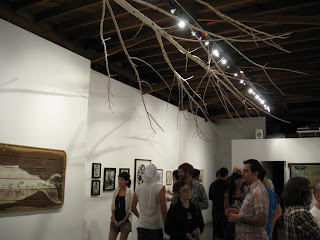 The work from the Friends United Network crew was really cool to take in, complete with a huge tree suspended from the ceiling that had it’s ‘shadow’ painted on the gallery floor – looked super cool. 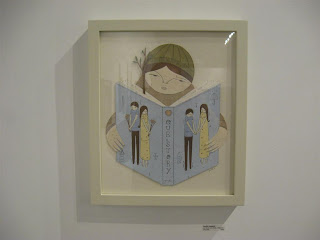 Highlight of the show were the two new works from Portland based artist Timothy Karpinski (see above and below). His delicate and whimsical works of life as we know it are just so beautiful. Look for his show with us this November in our project room during Audrey’s ‘Drawing Show’… Timothy’s also on the books for a full solo in our main gallery next year, so be sure to check out his work when you can further over at http://www.timothykarpisnki.com/ 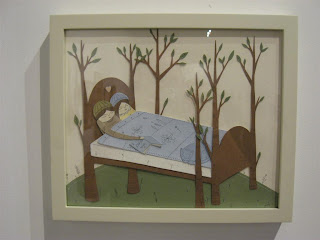 Ended the evening off by having Yoskay Yamamoto throw a lil’ something in sketchbook #7… as he was drawing away, found out about his upcoming UK solo show at O Contemporary… HUGE for Yoskay – congrats bro!!! 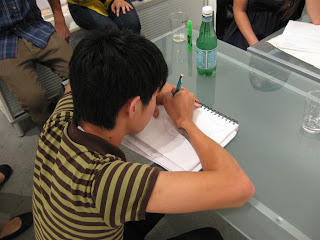 Rolled into the homestead about 1130PM… a great night of art was had and we’re already looking forward to this week’s shows including the big opening of Small Bills and the huge Crazy 4 Cult 2 this Friday at Gallery 1988… not to mention next weekend is the big 8th Anniversary of Cannibal Flower, so August continues to deliver the goods in a big way (and this during a month that is usually the ‘off season’ for the art world). Gotta love LA!