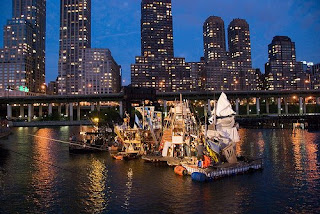 Picture from last year’s Swimming Cities of Switchback Sea
The Swimming Cities of Serenissima is a fleet of three intricately hand-crafted vessels that will navigate the Adriatic Sea from the Karst region of Slovenia to Venice, Italy in May of 2009. Designed by the artist SWOON, the floating sculptures are descendants of the Swimming Cities of Switchback Sea (Hudson River, 2008) and the Miss Rockaway Armada (Mississippi River, 2006 and 2007). The Swimming Cities of Serenissima are built from salvaged materials, including modified Mercedes car motors with long-tail propellers. For Swimming Cities…, SWOON will collaborate with 30 artists from the United States, including OBIE award-winning playwright Lisa D’Amour. As the Swimming Cities move toward Venice, the crew will collect and install keepsakes in an ark-like cabinet of wonders that will be on display on the boats when they arrive. Once in Venice, the boats and crew will offer intimate performances that incorporate music, shadow puppetry, and story. The project is produced with the assistance of Deitch Projects, Paper Monster, Black Rat Press, Build It Green, and a thousand other people. 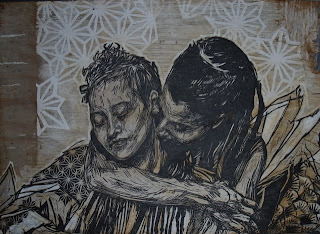 Original SWOON print on tracing paper, with hand-painted and hand-cut elements; printed, assembled, and wheat pasted by the artist on found wood. The piece is signed and is approximately 48″x34″
Benefit Raffle for Swimming Cities of Serenissima
2/26-3/26
To help fund this amazing and ambitious project, a raffle for one of SWOON’s larger, signed works kicks off tomorrow. The idea behind the raffle is to get as many people involved as possible, thus helping to fund the project through small contributions from regular people, not just huge galleries.

To enter the raffle, please go to http://www.swimmingcities.org/ and click on the ‘RAFFLE’ button. The more tickets you buy, the better your chances of winning. When your purchase is approved you’ll get a confirmation number. The winner will be announced on March 26th. 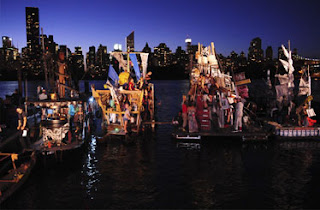 A letter from SWOON further detailing the adventure ahead:
Last year, with a team of about 75 friends, crew, and collaborators, I built a flotilla of rafts out of salvaged bits of New York City. Our precarious floating home traveled 140 miles south along the Hudson River. What left as the refuse of the city’s mega construction returned as six vessels trying to encompass a whole world (the seventh died along the way).

This year, with some of those same vessels, and some new, we begin the second leg of our journey. Our destination? It’s the city whose outrageous countenance, rising straight up out of the ocean like that was a fine sort of thing for a city to do, was our original inspiration. Yes ma’am, we’re headed across the Adriatic Sea toward our first love, Venice.

This year we are a crew of 35, all artists, musicians, crackerjack mechanics, and folks who specialize in big, impossible, ridiculous dreams. We will put on a performance and cobble together a cabinet of wonders. We will, in our form, be working on themes of recycling and reuse, considering the footprint of a human community on the planet, and on issues of climate change. We have not found a solution to floods and sinking cities or where to go next, but we know that it’s important to us to create art and community at the same time as we seek a different relationship to our world.

We are starting in the Karst region of Slovenia (a former forest barren to this day after its large trees were cut for pilings in Venice), and skirting the northern coast of the Adriatic. For fun and a little mischief, we will be crashing the Venice Biennale.

Since we are doing all of this in an otherwise collapsed economy we need lots of help. It’s a big project that we are trying to fund with the help of many small contributions from people who would like to be involved and help us get these crafts afloat — even if you just think we’re cheeky and want to see if we’ll sink. This raffle is just one of the many ways we’re trying to get back on the water.

For all the latest on this amazing project, keep an eye on http://www.swimmingcities.org/
Swimming Cities of the Switchback Sea from ekai on Vimeo.