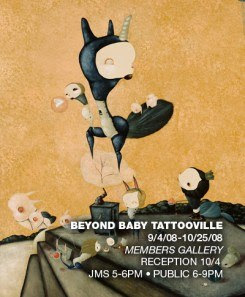 This weekend, October 3-5, marks the second annual artist get together known as Baby Tattooville put together by Bob Self, publisher of Baby Tattoo Books. This amazing gathering features top artists, collectors and fans of art and culture who get to hang out and mingle for an entire weekend together. The highlight of course being able to get an intimate look at the creative process of some of today’s most respected artists including Jeff Soto, Glenn Barr, Dave Cooper, Bob Dob, Joe Ledbetter, Daniel Peacock, Ana Bagayan, Shag, Brandi Milne, Amy Sol and Michael Whelan.

The Riverside Art Museum (RAM) currently features an exhibition with all of the artists featured in the 2007 and 2008 Baby Tattooville fraternity, co-sponsored by RAM and Billy Shire Fine Arts.
In conjunction with Baby Tattooville 2008, Beyond Baby Tattooville presents artwork by twenty-two artists loosely tied together in the ambiguously named “pop surrealism” or “lowbrow” art movement.
Artists include: Glenn Barr, Dave Cooper, Bob Dob, Joe Ledbetter, Daniel Peacock, Ana Bagayan, Shag, Brandi Milne, Amy Sol, Michael Whelan, Gary Baseman, Tim Biskup, Tara McPherson, Amanda Visell, Ragnar, Luke Chueh, James Jean, Frank Kozik, Jeff Soto, Gris Grimly, Frank Kozik and Jeffrey Scott.
Sat, Oct. 4th 6-9PM
Riverside Art Museum
3425 Mission Inn Avenue in Riverside / 951.684.7111
For more info on the show: http://www.riversideartmuseum.org/exhibitions/view/?id=60
and here: http://www.babytattooville.com/
As mentioned in our weekly show post, this is the last weekend to view In The Land Of Retinal Delights at the Laguna Art Museum… so make a day of it. We will be. We’re planning to head down early to catch the show one more time in Laguna, then up to hang with all that will be in town at the Riverside Museum and then back into LA in time to catch Joshua Petker’s solo at Corey Helford and the “Raw Skies” group show at Carmichael… going to be a killer art-packed weekend!
*Thanks to Mark Murphy and his blog for some of the above info