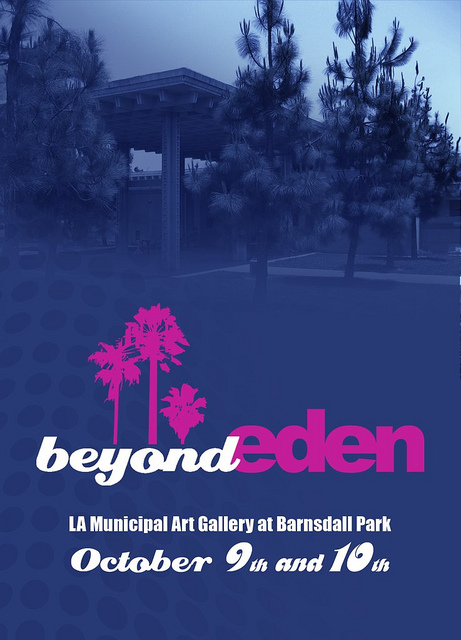 The second edition of Beyond Eden will be hosted by the Los Angeles Municipal Art Gallery at Barnsdall Park this coming October. Beyond Eden is a multi-gallery event celebrating the new contemporary art scene in Los Angeles. The public is invited to attend this special event and admission is free.

After the overwhelming success of last year’s Beyond Eden exhibition which drew over 5,000 people over the course of the weekend, the organizers are keeping the focus of the event on the new contemporary art movement. This genre of art has been building momentum and a patron base in Los Angeles for the past several decades and is finally starting to receive mainstream recognition from major institutions and publications the world over.

Beyond Eden will showcase the works of over a half dozen galleries and will be held inside the beautiful confines of the historic Los Angeles Municipal Art Gallery during the weekend of October 9th and 10th with an opening night celebration planned for Saturday, October 9th. Participating galleries include Carmichael Gallery, C.A.V.E. Gallery, Copro Gallery, Crewest, La Luz De Jesus, LeBasse Projects, and Thinkspace.

Beyond Eden will also feature the presentation of a lifetime achievement award to the one and only Robert Williams. In addition the event will also feature the LA premiere of Humble Pictures’ ‘New Brow’ film along with live painting demonstrations throughout the gallery alongside special installations from local street artist Shark Toof and Australian artistic duo Dabs Myla. Rounding out the event is a special showcase celebrating underground art event Cannibal Flower’s 10 Year Anniversary.

Founded in 1951, the Los Angeles Municipal Art Gallery is a historic 10,000 square foot facility located on the sprawling grounds of Olive Hill in the Barnsdall Art Park. The park overlooks the city of Los Angeles and is also home to the famous Frank Lloyd Wright Hollyhock House and Arts Complex. Under the Department of Cultural Affairs, the LAMAG is the premier city-run gallery that focuses on contemporary art, particularly the work of living Southern California artists. 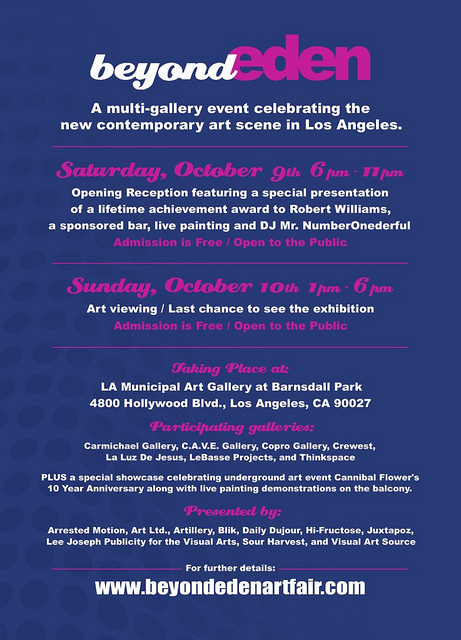 Crewest: Miguel Paredes, Man One, Else, Chaz Bojorquez, and PaperMonster