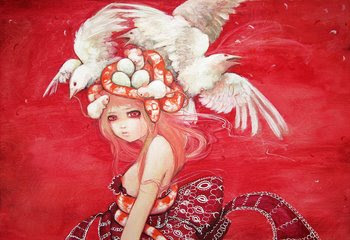 Camilla d’Errico “Aida”
Camilla d’Errico just won ARTslant‘s juried ‘Showcase’ competition!!! Her winning piece, “Aida”, is pictured above.
View the results / competition at the link below:
http://www.artslant.com/global/artists/showcase?sublist=4%5Epainting
Congrats to Camilla on winning the competition! She deserves it, as she’s been a whirlwind of activity currently. She’s so much going on… here’s a lil’ recap on things:
Apart from the journal and stationery set she just released via Dark Horse, Camilla also just did a great little webcomic for them – check it out here.

Camilla is really starting to find a ‘home’ at Dark Horse, which is awesome. There’s more to come from this collaboration, so keep your eyes peeled.

Some may have heard, but she’s also working with Grant Morrison. He’s finally given everyone the news they’ve been waiting for – the title of the book Camilla will be drawing! Called, The New Bible, Camilla’s sexy take on religion should be interesting to say the very least. More on this awesome collaboration soon.

Learn a bit more about Morrison and his work here.
Also be sure to check out http://www.billyboomboom.com/ to view details about her new videogame!!! It’s coming out this August on Nintendo DS, and then Wii. She’s working on a 5 issue mini series for the game, that will come out as a comic book. More info on how that short series will be released and when soon.
If you haven’t had your fill of Camilla goodness after all that, then be sure to mark your calendars now for what will be Camilla’s last showing in the Los Angeles area for a good bit…
Camilla d’Errico + Caia Koopman
Opening Reception: Fri, Sept. 11th 7-11PM
Exhibit runs: Sept. 11th – Oct. 2nd @ Thinkspace
Past all that, there’s more, but we’ve been sworn to secrecy for now.