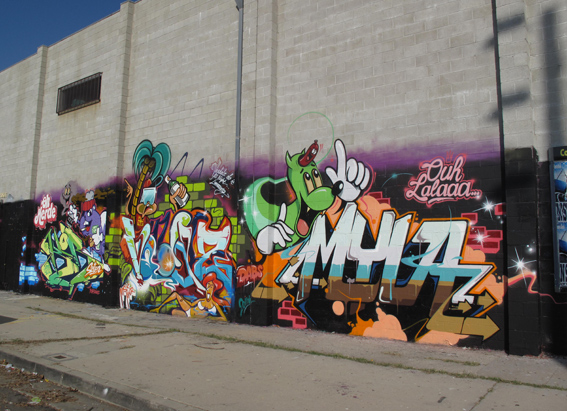 Vegemite powered dynamic duo DABS MYLA recently teamed up with SCIEN and KLOR (aka 123 Klan) and RIME to paint a big wall together in Hollywood.

Check out more pics of the mural coming to life on the duo’s blog:
www.dabsmyla.com/news/

Never ones to take a break, Dabs Myla recently rocked a live mural during the Agenda Trade Show down in Anaheim, CA earlier this month.

Upcoming shows in the months ahead include a small solo show alongside Shag during Modernism Week up in Palm Springs at M Modern Gallery, a piece in Greg Simkins’ show he’s curating at 1988 Gallery and they’ll also be heading up to Portland, OR with us this March for our ‘LAX/PDX’ show we’re curating at Together Gallery. After that they plan a lil’ trip back home to Australia and then it’s back to the studio to continue work on their upcoming solo show at Thinkspace coming up this August.

Be sure to check out Unurth for a full recap of all of ROA‘s exploits while he was out in Los Angeles. They have great images of his stay both before, during and after his recent pop-up show that we presented.

The works from the show continue to sell with only a few major works still available. With an amazing year ahead already coming together for ROA, don’t miss your chance to add a piece from this amazing artist to your collection while you still can.

Big thanks to New Puppy Gallery and Jetset Graffiti for all their help during ROA’s visit to LA.

Keep up with ROA here:
www.flickr.com/photos/roagraffiti

Australian duo Dabs Myla are at it again. After rocking the ‘Long Live The Yellow Fin’ mural alongside Craola recently, they hooked up with Askew and Deus (New Zealand), Vans (Australia), Skore (Germany), Rime, Revok, and Witness for a really interesting concept wall in downtown Los Angeles.

Askew had the idea to paint a wall based on the phrase “Only Time Will Tell” with the running theme of the 4 seasons along the wall in order, with each season teamed with each word.

The wall took two long days and nights to complete and came out super strong. Check out more pics of the wall coming to life here: www.flickr.com/photos/thinkspace/sets/72157625677136794/

Keep up with Dabs Myla at www.dabsmyla.com

Dabs and Myla recently teamed up with Greg ‘Craola’ Simkins in downtown LA for the LA Free Walls Project presented by Jetset Graffiti. The new mural is near the corner of 7th & Mateo (right near ROA’s recent possum piece) and came out just stunning. Featuring brush work as well as can work from both, the new mural screams to be viewed in person.

Check out more pics from the painting session and some close ups of their mural here:
http://www.flickr.com/photos/thinkspace/sets/72157625631473374/

Also be sure to check out Dailydujour’s awesome coverage here:
http://dailydujour.com/2010/12/16/seen-dabs-myla-craola-mural-in-dtla/

Keep up with the duo here: www.dabsmyla.com