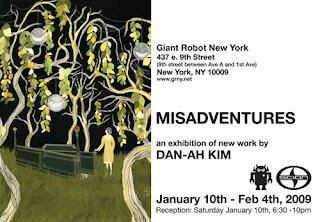 Hot off showing with us down at Art Basel as part of our ‘Looking Glass’ exhibit, Brooklyn-based artist Dan-ah Kim is preparing for her debut solo show in NYC coming up this weekend.

Dan-ah Kim
‘Misadventures’
January 10 – February 4, 2008
Reception: Saturday, January 10, 6:30
Giant Robot Gallery
437 East 9th Street (Between 1st Ave. & Ave. A, in the East Village)
New York, New York 10009 / (212) 674-GRNY (4769) / grny.net
Dan-ah Kim is a Brooklyn-based artist and designer who divides time between making art and freelancing in film and television. Kim’s show will include paintings and mixed media pieces of various sizes, done with gouache, ink, acrylic, layers of paper, and threaded details. Of her recent work, the Pratt Institute graduate says she has found inspiration in everything from history and mythology to constellations. Kim mingles such stories and curiosities with her New York surroundings to create multi-layered, highly textured experiences and imagery of new worlds featuring female protagonists and fantastic creatures in heroic, colorful settings.
Look for Kim to return to Thinkspace for her second Los Angeles solo show in the spring of 2010. Until then, check out our ‘available artworks’ section to view some great works and if you are in NYC this weekend, be sure to swing by her show.