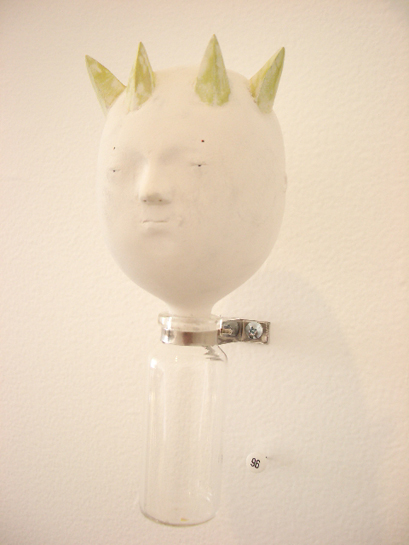 Eishi Takaoka will make a return to LA next month for a solo show at GR2 over on Sawtelle in Los Angeles.

His hand-carved sculptures are just stunning. We can’t wait to hopefully add another of his works to our ever-growing collection and can’t stress enough to get out to this show and see his works in person for yourself. They speak so loudly.

Eishi Takaoka is a young sculptor based out of Kagoshima, Japan who has participated in group shows in Tokyo and New York, as well as one-person exhibitions at Giant Robot New York and GR2 in Los Angeles in the past. This is his 2nd solo at GR2 here in Los Angeles. He also took part in the Giant Robot curated group show at the Scion Installation LA space a couple years back.

The exhibition will be comprised primarily of intricately carved wood heads painted with raw mineral pigments with many placed atop empty glass medicine bottles. Although these sculptures all portray the same serene expression, their outwardly calm façade belies a world of bottled-up emotions. With nowhere else to go, these intense feelings manifest themselves in outlandish formations that sprout out the top of each figures head.

Takaoka’s unique work is rooted in a personal fantasy world that is fueled by the emotional ups and downs of daily life in lower-middle class Japan. Heavily influenced by the expressive songs of the Japanese punk rock group Eastern Youth, Takaoka releases his frustration with life in Kagoshima and feelings of isolation into each of his sculptures.