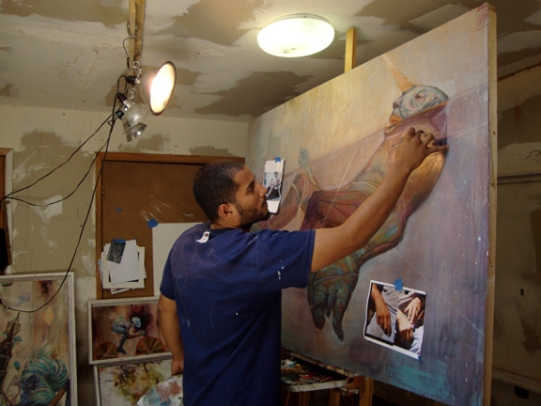 Ekundayo’s first solo show in LA in over three years is coming up on Fri, June 11th at Thinkspace.

‘Joy Today Jeopardy Tomorrow’ is an exhibition about the beautiful struggle we all face of reaching for our dreams, in hopes of guiding our own destiny. Whether we succeed or fail is not important, as long as it’s on our own terms. Ekundayo’s work illustrates the sacrifices we make in the pursuit of fulfillment, while simultaneously questioning the actions taken to attain this ‘fulfillment’ we all seek. A great deal of inspiration for this new body of work has come from the life of Marcus Mosiah Garvey Jr., an African nationalist who during the 1920’s had a vision to bring his people from all over the world to a higher level of conciseness in regards to where they come from and how they provided for themselves. Although Garvey failed in his ultimate goal of having a fleet of steamships fairing people from all over the world to Africa in-order to connect them to their origins, he left a legacy behind that continues to inspire countless others.

When looking at the work you get a sense of an inner struggle with the central figures becoming anchored by a large burden, while at the same time appearing weightless, as if suspended in moments of relief. A sort of “misshapen beauty” which speaks to the imperfections and vices found within all of us. Ekundayo’s pieces are handled with a deliberate sensitivity, framed by moments of very loose, almost sporadic applications of paint, which help to give the finished works a sense of inadvertence, that in turn serve as a testament to the artist’s intent.

Opening Reception: Fri, June 11th 7-10PM
*The Crepe’n Around Truck will be out, so bring your appetite!