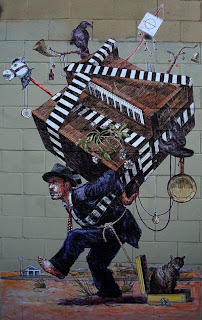 “My current body of work is an allegory about memory’s power to hold us back or move us forward. The central character in this parable is a 6 x 10 foot linocut of an Everyman (shown above making his debut on the streets of Brooklyn this past weekend), who has lost it all and wanders the plains with all his belongings strapped to his back. He navigates a world in crisis by learning from his past. The remainder of the characters that he encounters are individuals lost in regret. I have developed these paintings and prints during the American housing and credit crisis of the past year. In contemplating where we are and where we might be, I have found myself looking back at history, remembering the Great Depression, and considering what effects it had on the American psyche. The uncertainty that existed then is present now, and I am addressing the kind of escapism through nostalgia that can occur in the midst of calamity. Every character that the Everyman sees is gripped by this need to escape their present circumstance. They are people lost in a memory at the very point when they should be paying attention to what lies ahead. Many different artists have inspired the flavor of this world including the photography of Walker Evans, the films of the Cohen brothers, the music of Tom Waits and the theatre of Robert Wilson.” – ELBOW-TOE

Peep the ‘sneak peek’ via the link below for more from ELBOW-TOE. Many new shots have been uploaded and more still to be loaded as we near the opening of Mostly Memory:
http://www.flickr.com/photos/thinkspace/sets/72157606341876562/
Mostly Memory
ELBOW-TOE & ARMSROCK
Opening Reception: Fri, Dec. 12th 7-11PM
Both artists will be on hand doing an install, street work, and a talk the afternoon following the show (details announced soon).
Plans are in place to have Jet Set Graffiti flim both artists doing a mural somewhere in downtown LA area as well as portions of the install process at our gallery hopefully. If you haven’t checked out Jet Set’s site, be sure to do so. They just posted a great in the studio report with ELBOW-TOE and have a couple older videos up as well from ARMSROCK and many others, including Ron English and Invader.