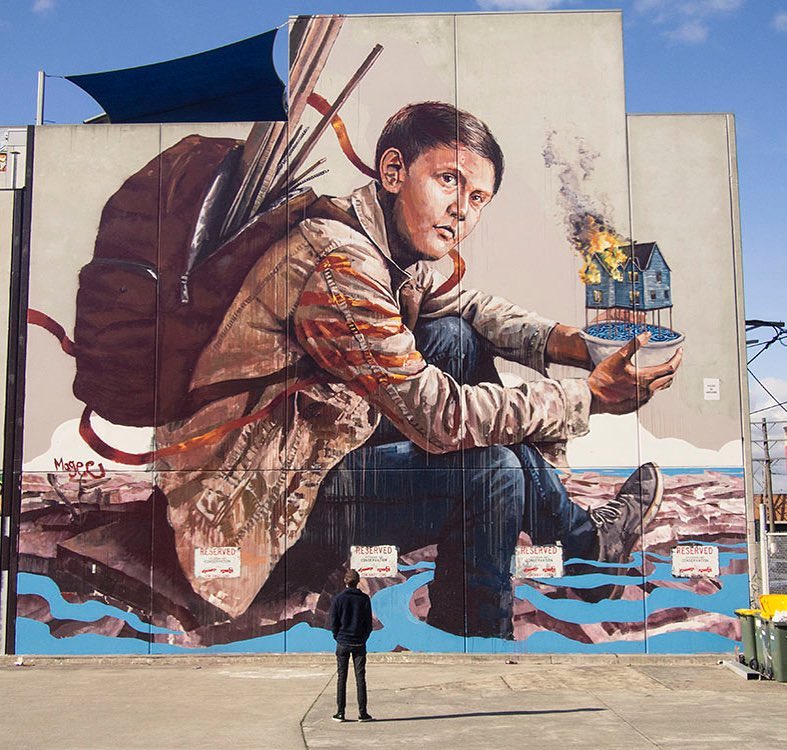 Thinkspace is pleased to present The Big Dry, its first solo exhibition of new works by Australian-born artist and muralist, Fintan Magee. A prolific international muralist, Magee has created architecturally scaled paintings and public interventions all over the world; over 200 murals across five continents, including pieces in Bogota, Buenos Aires, Copenhagen, London, Vienna, Los Angeles, Moscow, and Oslo, among many others. Magee draws from the personal and the social to reveal unexpected moments of universality and connection, addressing topical and current issues like climate change, environmental crisis, political inequity, loss, and displacement, all framed with pathos, sensitivity, and humor.

In The Big Dry, Magee looks to the idea of the American dream, specifically, the white picket fence and the aspirational ambitions it represents. As a symbol of the ownership of affluent middle white class America, the white picket fence has endured historically in our cultural consciousness. A product of the post-war capitalist idealism of the 50s, the white suburban domestic enclosure is a socially acceptable symbol of class division and segregation. Omitted from this narrative, however, is the tradition of migrant labor upon which this dream and its ideological mores have relied; those who have been excluded from its privileges are those who have physically built its foundations. Drawing parallels with the exclusionary policies of the Trump era and its constant inculcation and threat of ‘the wall,’ Magee considers the white picket fence as another divisive symbol, and asks the question: “who built the American dream?”

Born in Lismore, New South Wales, Australia, to creative parents, Magee grew up in Brisbane where he first gravitated towards graffiti. Encouraged to pursue drawing at an early age, Magee started painting local walls in his hometown at the beginning of high school and remained a graffiti writer, primarily, until 2010. He eventually outgrew the aesthetic and compositional limitations of writing and turned towards figuration and ambitious large-scale mural painting instead. Inspired by the street art scene and muralism movement evolving in the UK at the time with artists like Chloe Early, Connor Harrington, and Ian Francis, Magee began experimenting with narrative representation and figuration. Executing larger and more complex murals all over the world, Magee began developing his own voice, responding to site and place with contextually inflected public works created in specific response to the environment.

Magee is ultimately a contemporary social realist and a portrait painter. Though he incorporates compelling and poetic elements of the surreal into his impressive murals, his works are driven by an emphasis on individual stories and socially conscious narratives. Magee keeps his imagery firmly rooted in real human concern while drawing personal parallels with his own experiences and anecdotes. A firm believer in the substantive power of art to transform city spaces, democratize culture, and resonate with the masses on a guttural level, Magee continues to convert endless city sprawls into physically imposing stories, one massive wall at a time.