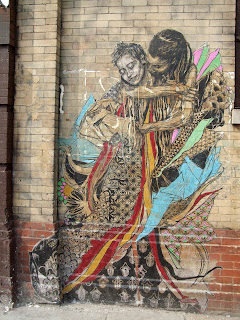 “From the Streets of Brooklyn”
Curated by Ad Hoc Art (Brooklyn, NY)
http://www.adhocart.org/

(Los Angeles, CA) “From The Streets of Brooklyn” is a wide survey of the street and graffiti artists who call Brooklyn their home. From internationally renowned street artists such as Bast and Swoon to hardcore graf writers such as Kuma and Rate, this show features almost 50 artists from every walk of street art and graf art life. Wheat pastes, stencils, murals, installs and of course tags and piece ups are all recognized and included in this once in a lifetime examination of what is currently going up and staying up in the streets of Brooklyn, New York. A photo montage by street art photographer Luna Park is included in the show as well as great installations in the gallery by Gaia with Rachel Lowing (front entry area) and Imminent Disaster (project room area). Also, be sure to check the area around the gallery for the incredible chalk shadows of Ellis G. dotting the sidewalks and enhancing the mundane city landscape, even if only until the next rain.

“We’ve been huge admirers of the art scene in Brooklyn, from the streets to the underground galleries, for some time now. When it came time to put together our 2009 exhibition schedule we had the idea to bring a lil’ bit of Brooklyn to Los Angeles. A show of this magnitude has never been attempted and upon further talks, we thought it best to go to the source, and hit up the Ad Hoc Art crew to curate the definitive Brooklyn group show.”
– Andrew Hosner, co-owner/co-curator, Thinkspace

“We here at Ad Hoc Art have continued to be impressed with the quality of work being shown over the last few years at Thinkspace Gallery. The idea to bring Brooklyn artists to LA had been floating around in our heads for quite some time, but when Thinkspace showed interest in being the gallery to host such an event, we knew it was time to make it happen!”
– Andrew Michael Ford, director, Ad Hoc Art

Sneak Peek of From the Streets of Brooklyn presented by noted photographer Luna Park here: http://www.flickr.com/photos/lunapark/sets/72157608363833285/show/

Gaia and Rachel Lowing statement on ‘The Uroboros Project’ installation:
Gaia is a young street artist from NYC who is currently based in Charm City, Baltimore. In less than a year, he has established a strong presence on the streets of both these cities. His subject matter combines personal experience with the expression of the emotional relationship between animals and humanity.

“The Uroboros Project is a collaborative effort between artist Rachel Lowing and I. Spawned from a mutual interest in articulating the inexorably intertwined relationship between people and nature; we examine the act of consumption and its implications on contemporary life. The urban environment is an organism whose growth is dictated by the symbiotic relationship between the city and its inhabitants. It is the ideology and laws of society manifest, yet simultaneously it obeys basic, natural properties of formation and development that is shared by all sentient creatures.

By considering our connection and correspondence with the city, we come closer to understanding the purgatory between nature and culture that defines our internal struggle as human beings.

The project’s title, Uroboros, is derived from a circular symbol depicting a snake, or less commonly a dragon, swallowing its tail as an emblem of wholeness, totality, or infinity.” – Gaia

Blog chronicling the progress leading up to the final stage of the project at our gallery: http://www.uroborosproject.blogspot.com/

Imminent Disaster bio:
Imminent Disaster is an emerging Brooklyn-based artist creating in a variety of mediums including wheat pasted prints pulled from linoleum block cuts, silk screening, collage and assemblage. Disaster is inspired by the street as an environment: a place with people, structures and history that are constantly being destroyed and rebuilt. Combining carefully researched fact and legend, she creates figurative images and historically inspired broadsides that are glimpses of a world that has fallen through the cracks of time. Disaster has participated in the Miss Rockaway Armada and Wooster on Spring, amongst other high profile group and featured exhibitions, including showing at this past December’s Art Basel as part of the GenArt Vanguard Fair.

Luna Park bio:
Luna Park started documenting New York City street art and graffiti four years ago. Little did she know then that a small-time hobby would turn into a full-time obsession. Now she spends all her free time prowling around NYC’s five boroughs in search of beauty in unexpected places. She is passionate about urban art and supportive of all creative endeavors to redefine and redesign public space.

For “From the Streets of Brooklyn” Luna will be creating a collage of some of her favorite shots focusing on the artists that make up the exhibition.

Coming up in February, 2009:
“Dreamgirls and Ukes”
New works, an installation and a performance from Amy Crehore
+ “The Silent Treatment” featuring new works from Anthony Clarkson in our project room

Coming up in March, 2009:
“Untitled (New Works)”
New works and an installation from Matthew Feyld
+ “The Sins of Atticus Finch” featuring new works from David MacDowell in our project room