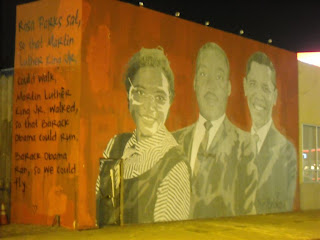 Drove by Mr. Brainwash‘s studio on LaBrea today and noticed he had updated the outside with a huge mural playing off a similarly vibed one that he created in December down in Miami during Art Basel… always fun to see what he does out there next. Not many artists can claim to have their own billboard sized wall to do with as they want month in and month out on the outside of their studio, let alone one facing out on to one of the busiest streets in the USA.