Thinkspace is proud to present our third exhibition AmeriCan’t with Brazillian born and Los Angeles-based artist Alvaro Naddeo in the project room. Naddeo’s watercolors combine textures and edges in compositional amalgams. His interest in the life of the unassuming object extends to billboards and signage, cast away containers and boxes, and domestic and industrial spaces, conjoined and superimposed in unexpected mashups, or cultural relics that speak of use and disposal in the contemporary city.  In anticipation of AmeriCan’t, our interview with Alvaro Naddeo discusses the shows inspiration, his creative process, and what it feels like leading up to the opening reception.

SH: Tell us about this show. What is the inspiration? What were you exploring in the work?

AN: The inspiration for this show comes from my desire to create something where I’m able to mix memories with textures of the places I’ve been while at the same time making a social and political commentary on our society. AmeriCan’t is about the marginalized, the minorities, those who can see and smell everything good that America has but never allowed to get there. 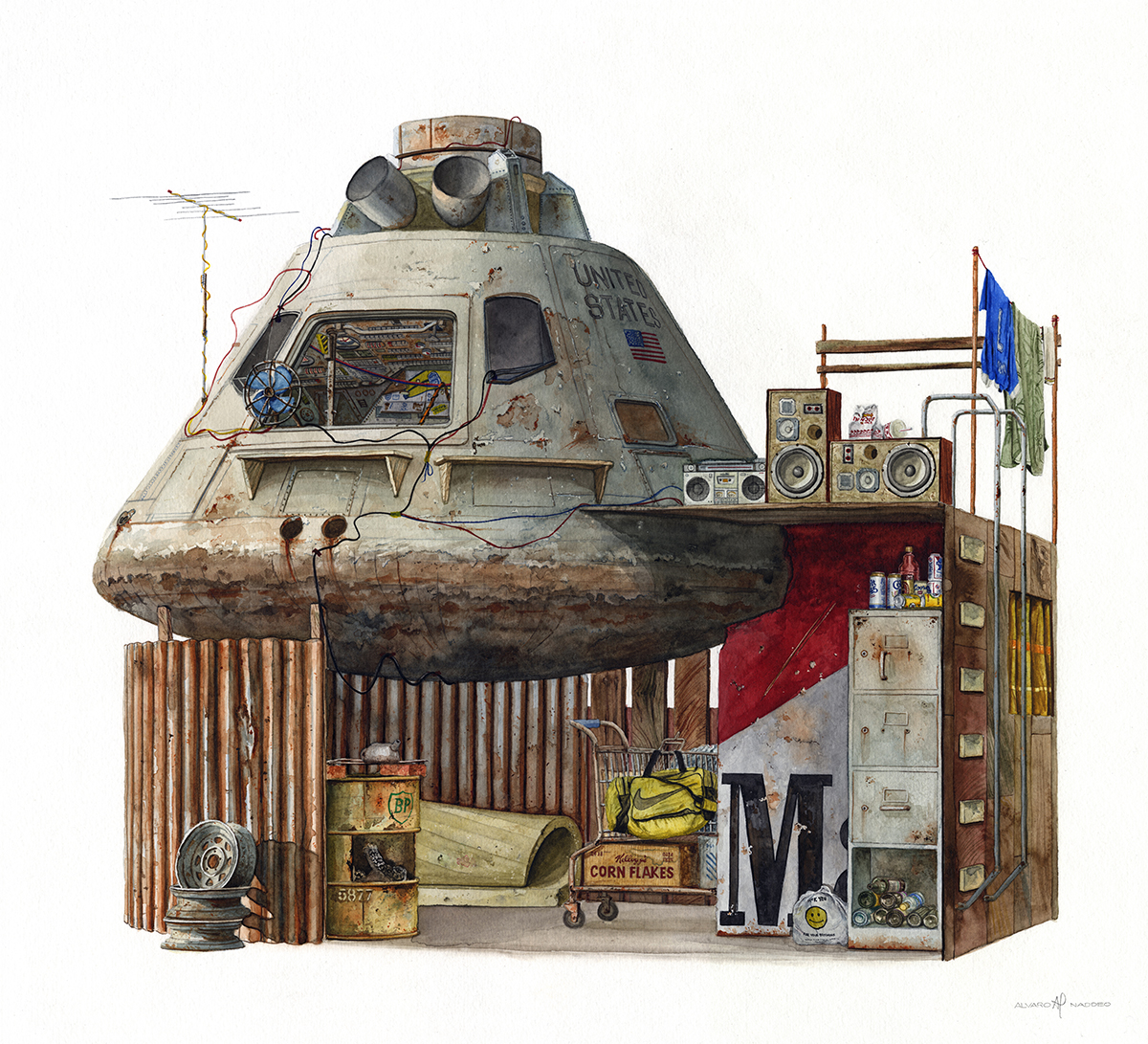 SH: Where do you source inspiration? How do you capture those ideas for pieces; do you have a sketchbook on hand or is it just a note to yourself in your phone?

AN: Ideas appear at random times, and usually is just a piece of an idea, only one of the elements that I want to use not the whole painting. I don’t have a sketchbook, so I usually make some really rough sketches on post-it notes. Later, when I’m ready to start a new painting, I go through the small rough notes and combine a few of them.

SH: How do you plan out your compositions?

AN: My compositions are the result of many back and forths between some rudimentary 3D shapes, Photoshop, Illustrator and rough sketches. I may start with a pencil sketch, scan it, get a shape on 3D, draw over it, then move it to Photoshop and Illustrator where I make sure the perspectives and proportion of the elements are as good as I can have them, by this point I’m able to move to the paper and start painting. Only at that stage is when I create textures and also when I add light and shadows. 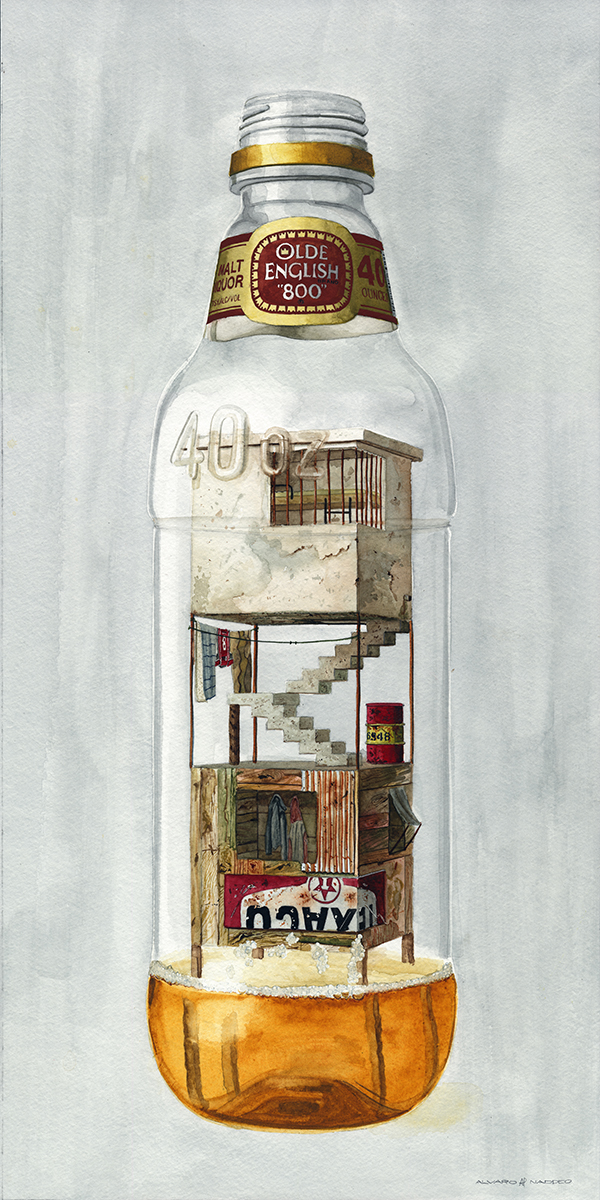 SH: What excites you about your work / creative process?

AN: The part that I enjoy the most is painting, pushing the watercolor on paper. It is a mix of a lot of freedom, letting it randomly and organically move and settle, while at the same time trying to control it and make it exactly what I would like it to do.

SH: What frustrates you about your work / creative process?

AN: Usually, nothing, sometimes the fact that watercolor doesn’t allow to fix most mistakes. 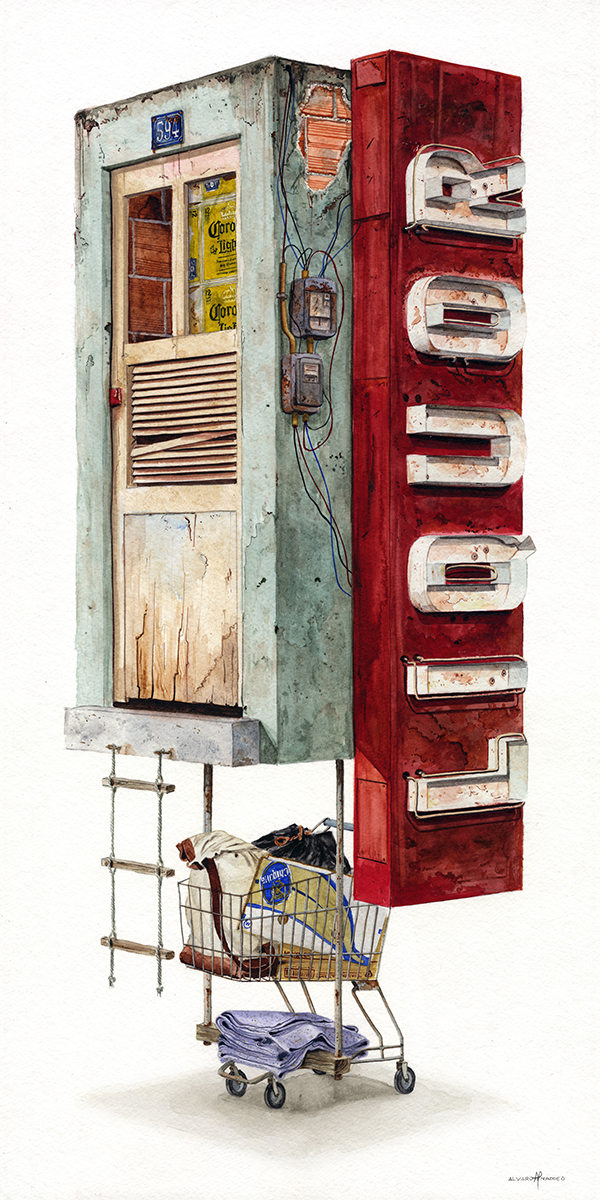 AN: I would like to be Ferris Bueller and take a day off.

SH: How do you approach developing work for an exhibition? Do you immediately jump into work on it, or are you more of a procrastinator?

AN: My production is more or less constant, independent if I have shows scheduled or not. Obviously having a deadline for a show scares me with the idea of not having enough to show, so I push my productivity a little more. I may be a little slower if I don’t have a deadline but I’m never not doing or thinking of a painting, I’m constantly producing something.

SH: What is your Meyers-Briggs or Zodiac Sign? Does it influence your work / artistic process?

AN: My Myers-Briggs, if I remember correctly was: Introvert, Thinking, but the other two letters were not well defined I was pretty much in the middle between them. I’m a Gemini and neither of those things has any influence over my work. 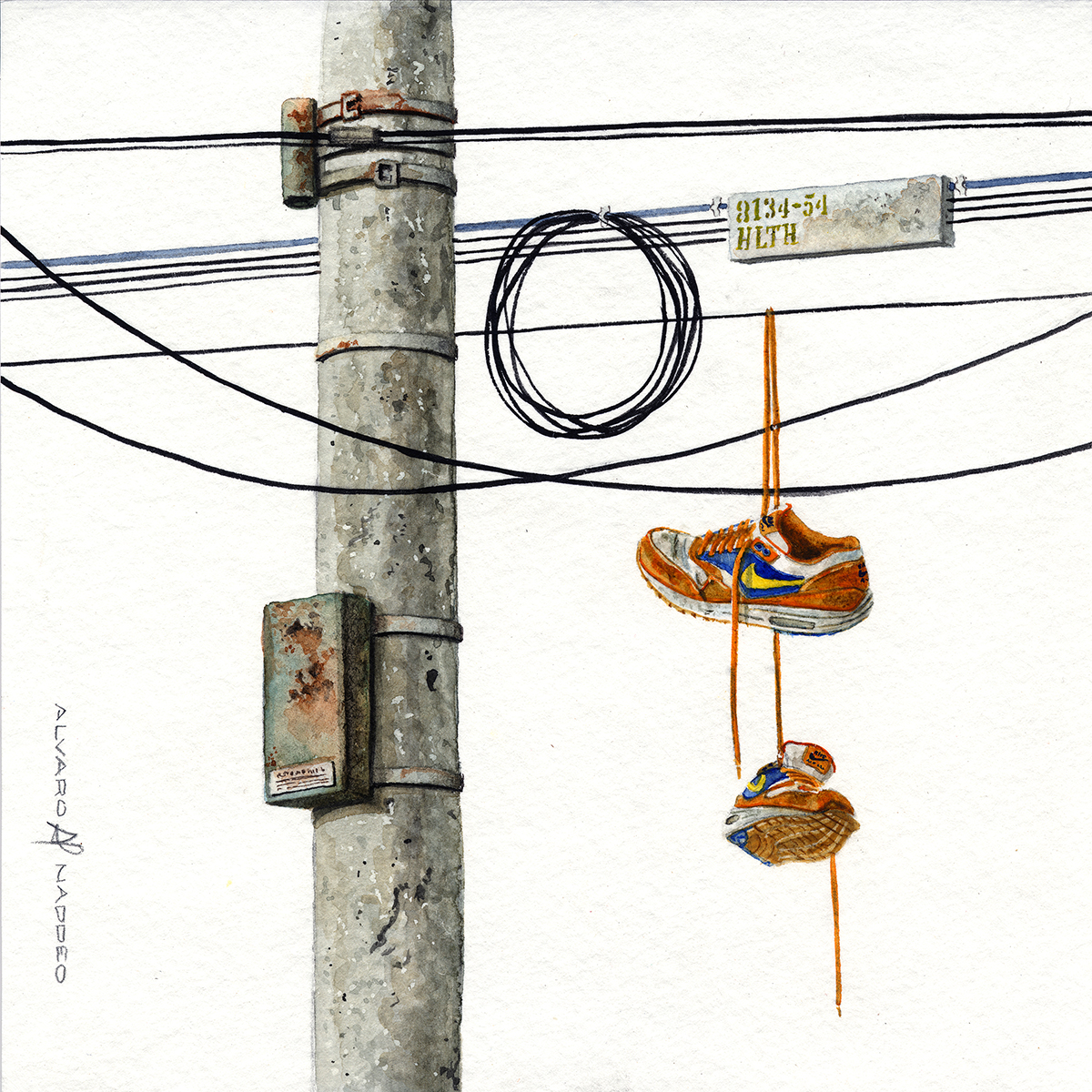 SH: Can you explain what it feels likes to anticipate the opening of your exhibition, the opening night?

AN: It’s really exciting, it’s an amazing feeling to have all your work hanging on those walls and having people looking and talking to you about them. The production part is very lonely, so the show is a rare opportunity to get feedback. Also when I’m done with a painting I just store it, so when a show is up is also a chance for me to look again at work that I’ve done a few months before and that I may have forgotten about them a bit. It is a good opportunity to have a fresh look at them, almost like looking at something I didn’t paint myself.

SH: Has there been an artistic catalyst in your life? Something, someone, some event that made a significant impact on you that has lead you to where you are now.

AN: Yes, quitting a job in an advertising agency in 2009 was an accidental catalyst. I quit the job at that agency, even before getting a new one because I believed I wasn’t being paid fairly. While I looked for a new job in another advertising agency, I focused on not being too lazy, so I created a few tasks to keep myself creatively busy, for example, I started drawing anything every day. Soon I got a new job but I kept drawing, Those unpretentious drawings slowly progressed and became my watercolor paintings a couple of years later. 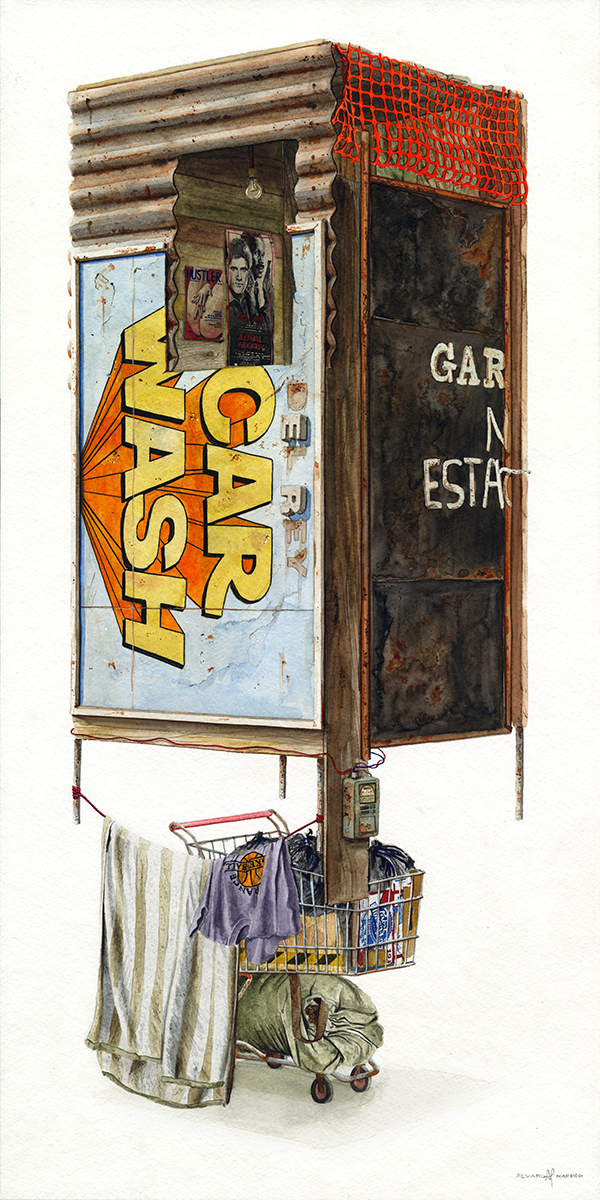 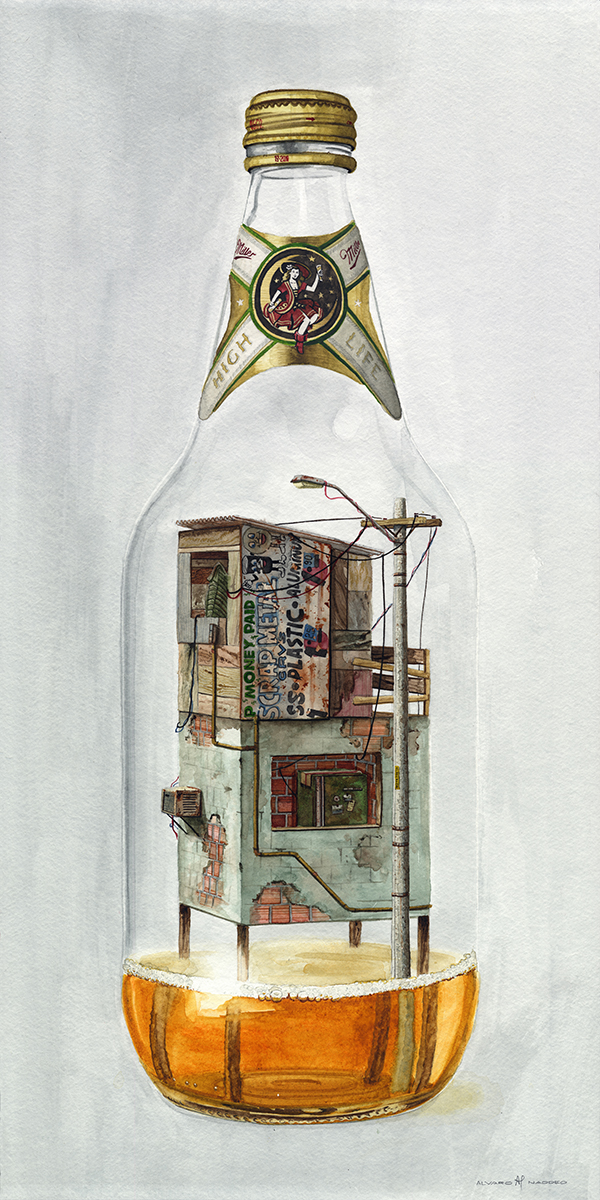