Scope is a great way for us to close out the year, and 2017 didn’t disappoint. We want to thank everyone that came to the booth and a big round of applause to the entire staff of Scope. Also, major kudos to both James Bullough and Michael Reeder who sold out their solo shows during the fair. Below is our interview with Reeder on behalf of his mini solo at Scope.

Was this your first time at Scope? We know you couldn’t make it down due to family obligations, but anything you saw online that really spoke to you, while watching on social media out in California?

Yes, it was my first time showing at Scope, and I thank you for the opportunity! In addition to the work, I had on display at the Thinkspace booth I was stoked to have a recent commission for the National Institute of Urban Art on display as well. It’s my largest studio piece to date, and I’m glad so many people got the chance to see it in person! While watching from afar, I must say I was very impressed with the work Jonni Cheatwood had on display at Mika Gallery from Tel Aviv. Really wish I could’ve checked it all out in person!!

How has the body of work you exhibited at Scope continued to explore the ideas around identity?

I would say that the subject of identity is more of a blanket theme rather than a specific focus. Although my paintings depict figures and representational elements, they’re not specifically intended to illustrate a meaning or a theme. For me, if I set out to make work that is centered around conveying a particular idea or meaning, the work would be very different than my work that already exists. With all of that said, the works on display at Scope represented a range of themes, subjects, and concepts; emotion, gender, ascension, and the internal and external self – which all fall within the subject of identity.

I would like to add that my process from start to finish is very open. I pull from a wide range of themes and motifs that allow me to build the paintings as fluidly as possible. This opens space to create the freshest and most uncontrived image I can, all the while holding onto my “style”. So, to be completely honest, I typically don’t know what a painting is about until it’s pretty much finished. I try to approach everything with a collaborative mentality where the paint, surface, process and myself work together to invent something new. Starting out with an intended final goal not only stagnates the true creative process but also kills the adventure before the journey begins. 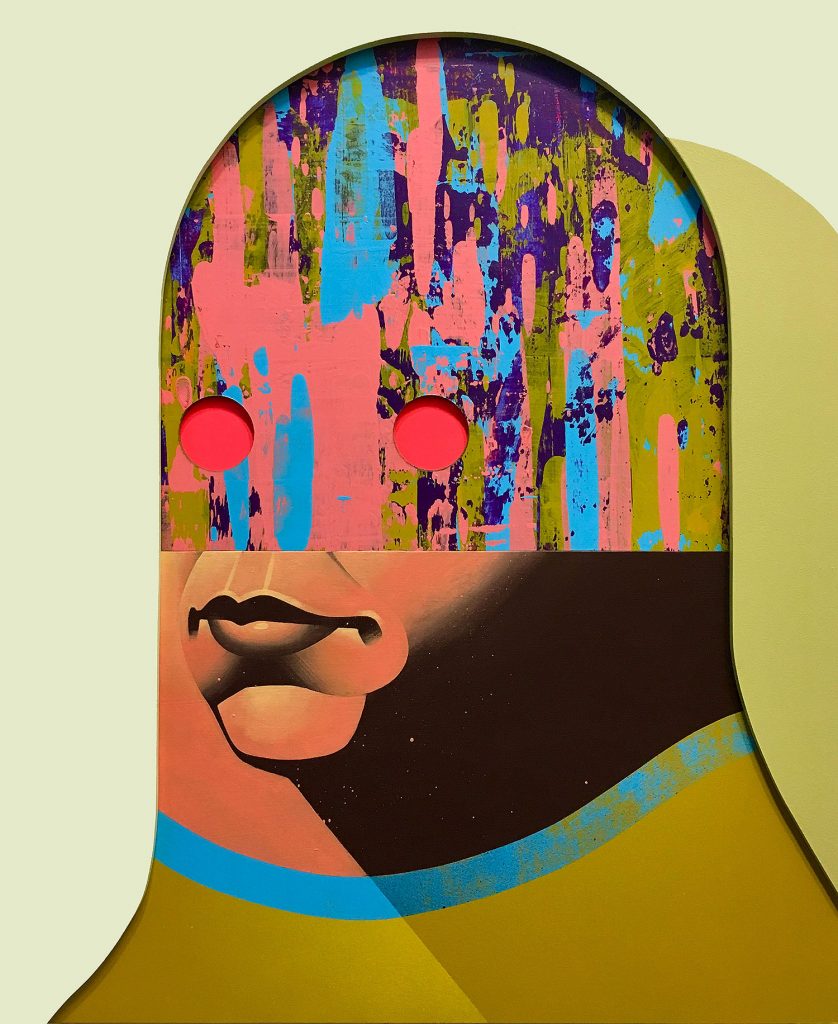 UK based painter Andrew Salgado has been a huge inspiration for me for quite some time. His work ethic in the studio is incredible, to say the least. He’s always creating huge, beastly yet elegant museum-quality paintings and is constantly raising the bar higher every single show. His work consistently possesses high levels of surface, color, and form and the integration of them all is masterful. Not to mention he is very humble about his success, and I look up to that quality.

What does a cram day in the studio look like? What are you eating? How much coffee are you drinking? What are you listening to? – Did you cram to finish pieces for Scope?

A cram day in the studio pretty much requires that I have everything I need to stay locked in until I’m reaching an almost unsafe level of delirium. This requires many pre-made sandwiches, snacks, water, beer, etc. – all stocked and accessible. I actually only drink coffee in the morning and I add in adaptogenic herbs to help me power through. I’ve found that drinking it in the afternoon or evening is just asking for a crash and that’s obviously the last thing I’m wanting to have happen. I’m jamming music constantly! I probably wouldn’t make art without it. I definitely listen to a wide range of music from Monolord, to The Mars Volta, Sun Kil Moon, Black Milk, Wu-Tang, MF Doom, to Godspeed You! Black Emperor etc. etc. etc.

I didn’t necessarily cram for Scope, thankfully. However, I did utilize nearly every waking hour leading up to the deadline – but I didn’t feel overly pressured. I was mainly trying to focus on cohesiveness amongst the works and that sort of adds an additional layer of complexity to the process. With that said, I’m pleased with the way it all turned out! 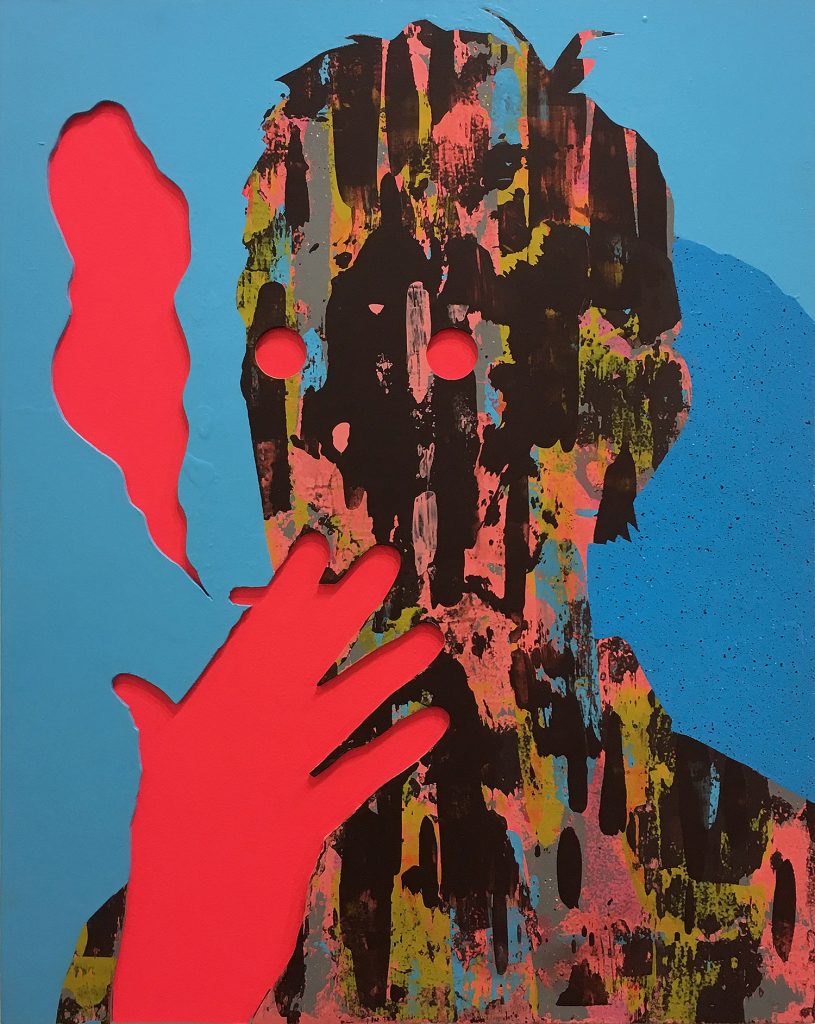 What’s coming up next for you?
I am finishing up some upgrades to my studio space (which is very much needed and amazing to have time for), and I’m about to get going on my Project Room solo show with you guys this coming April. I also have a rad collaborative project with Specialized Bicycles that I’ve been working on that will launch in the next few months. 2018 is packed to the brim, and I’m ready! 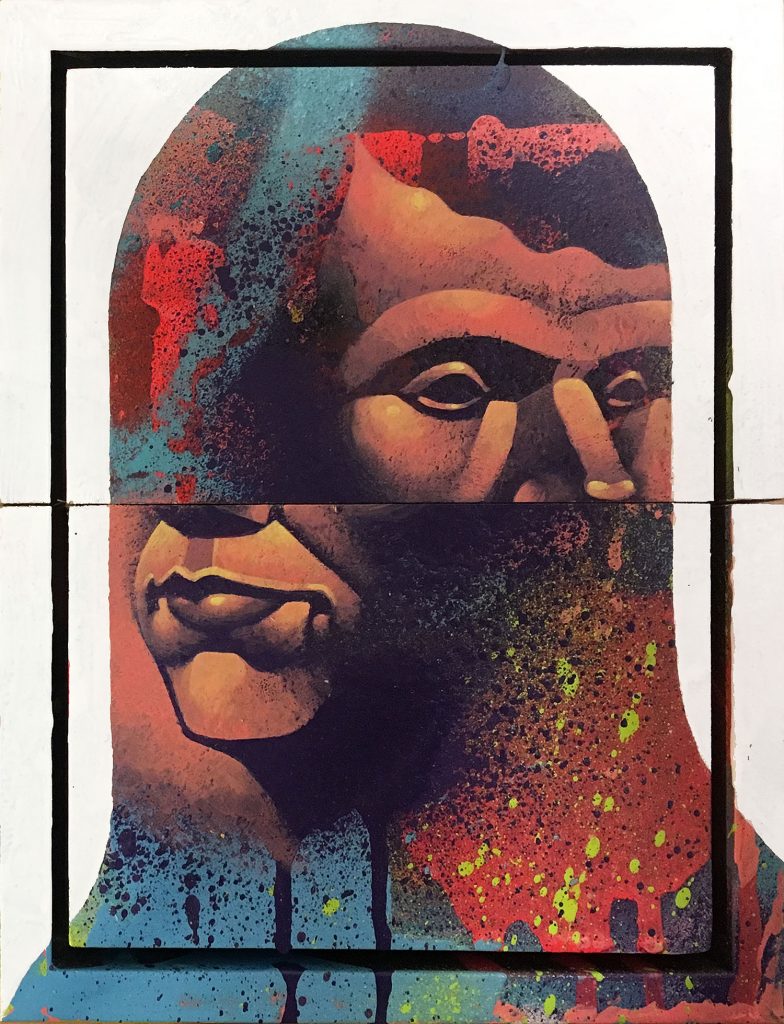 We look forward to showing more from Michael Reeder in the coming year, especially with his upcoming solo exhibition at Thinkspace Projects coming April 2018.

You can view all available work from him here.