Stella Im Hultberg has been showing with Thinkspace Gallery for as long as our doors have been open and we’ve loved being a part of her growth as an artist. For her upcoming exhibition Hollow Resonance opening this weekend our interview with Stella Im Hultberg covers her artistic process, the inspiration behind her work, and her desire to always challenge and explore creative mediums.

SH:  What was the inspiration behind this latest body of work? What ideas or themes were you exploring?

SIH: I’ve had about a year’s worth of meandering thoughts and ideas like stream of consciousness, but they all started with my mom having been in a coma for the past year after falling and injuring her head. She’s unconscious but seems like she does have certain responses like clutching onto my dad’s hand, or trying to open her eyes. To me, it seems as if she’s stuck inside her sleep.

Trying not to be too sad, I was imagining that maybe she’s trapped inside constant dreams, and that hopefully, she is dreaming about her favorite times of her life.

Then it evolved into lots of thoughts about the transience of time and youth, the finiteness of our lives.

Last year, I used the flowers as a metaphor for beautiful pain/burden (and/or burdensome beauty) so I wanted the flowers to be heavier looking and more raw, less beautiful. For this body of works I wanted the flowers to show those beautiful, albeit fragile, happy moments in one’s life, so I tried to keep them more delicate looking. But they are still, like last year, a conduit through which I try to connect and sympathize with my mother and motherhood in general. 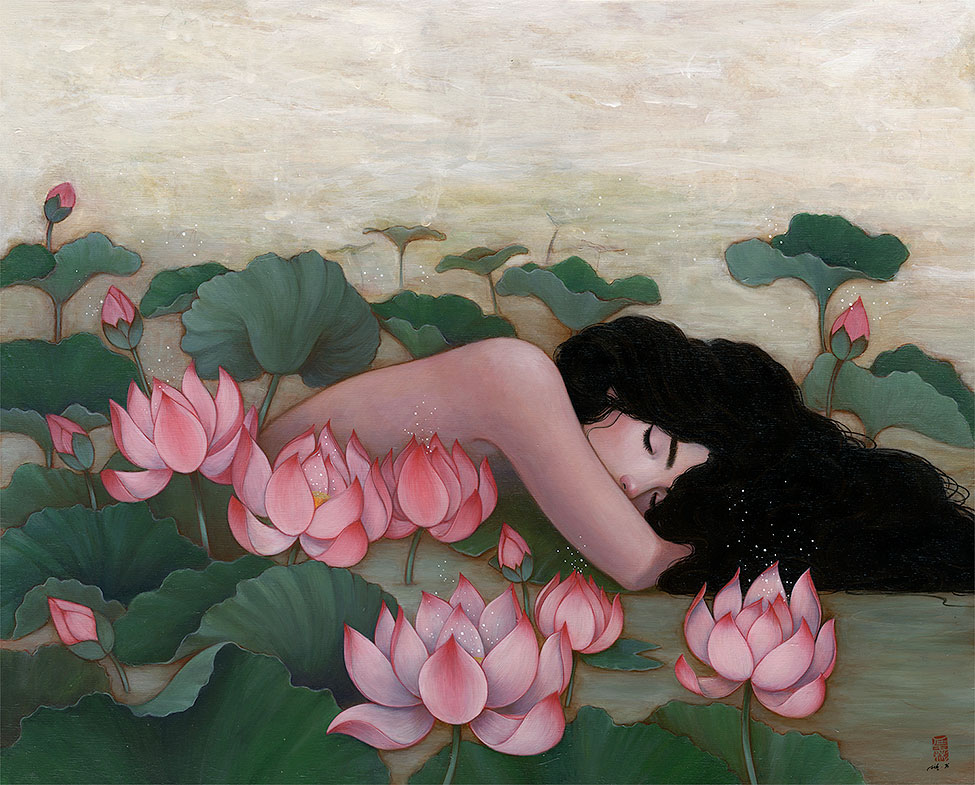 SH: You’ve been working with Thinkspace for a decade now, what advice would you give to artists breaking into galleries and can you tell us about the first time you exhibited your work to the public, where was it? Do you remember the piece? (outside of school/ doesn’t have to be a Thinkspace show).

SIH: The first real gallery show was a Vice-themed and Vice magazine sponsored event at now-defunct Project: Gallery in LA. It was a huge group show and I flew out from NYC just to be there since it was my first show. I believe it was in October of 2005, so almost exactly 11 years ago.
I had 2 pieces on plywood, in charcoal and acrylic washes. They were pretty raw and unrefined, and might not even be much recognizable.

I think Andrew saw my pieces there and contacted me right after that show, so my second show and on, were at Thinkspace Gallery.

I get quite a few emails asking me for advice on getting into galleries from young artists. I do think I really lucked out in that I started my art career right when the art scene started booming and galleries were reaching out to new artists.

There seems to be this general myth about artists that they’re all about talent. That’s some of it but most artists that I know and admire are the hardest, the most prolific workers. They work and hone their skills nonstop, even when they’re already successful.

The internet plays a big roll and if you work hard and keep posting artworks and just keep at it, I’m sure it’ll be a huge help to push you forward.
Keep on drawing! That’s what I keep reminding myself.

SH: What does a day in the studio look like? How do you structure your days?

SIH: In a nutshell, I work around the kid and her schedule. When I was painting a lot, my husband would take her out for hours a day so I could work undisturbed. Most day I can only work maybe an hour or two a day. But near the show date, I usually start working around 10 am after my husband and kid either leave or start playing by themselves at home and after other chores are done. Sometimes I work until they come home for lunch or sometimes until much later around 4 pm. Then I also work after putting her to sleep or nap. 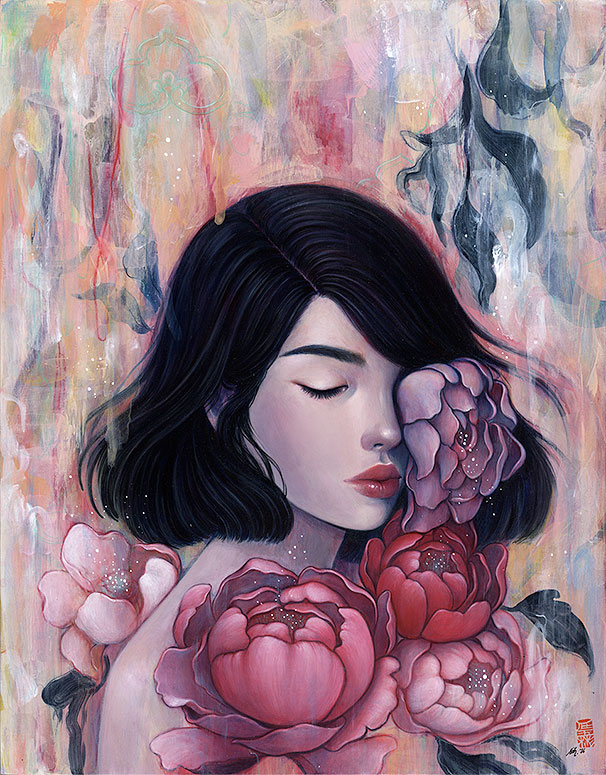 SH: What was playing in the background while creating this latest body of work; music, podcasts, Netflix?

SIH: I re-listened to 1Q84 for the 4th time, and I got to catch up with a lot of podcasts I’d missed out on in the past few months. I can only work in fits and starts now that I have a kid, so sometimes playing music makes me lose the sense of time, so unfortunately not much music lately. 🙁

SH: You said your piece “Hiding the Blue” was the first piece you approached with intention, where in the past other works flowed more spontaneously and you followed the piece. What is the balance in this show of intentioned work and spontaneous work?

SIH: This show was even more planned and thought out than ever (just compared to how I used to jump head in first in the past). Because of the time constraint of being a full-time parent, I had to make good use of the given time so I had to think ahead even when I wasn’t painting. Otherwise, it’s near impossible since a painting that used to take me a week (of long nights) now take up to a couple months!

I used to jump in head first if I had an image in mind or a loose sketch and let it develop organically like the stream of consciousness. I still don’t really start a piece with a super clear intention in mind most of the time but definitely much clearer than before because of the sheer mental incubation period away from the studio.

The one piece that was a surprise to myself is the largest piece (Age of Blooms) covered in flowers. I initially started it with a loose ink sketch, intending on filling it with watercolor. But it didn’t look right so I kept reworking it until it became what it is. It took a couple more months than I expected at first.

Next year, I’m hoping to be more planned – sketching out about 90% of the pieces instead of the current 45-50% before transferring to canvas or paper.

SH: If and when you experience creative blocks or self-doubt, what do you do to re-inspire you?

SIH:  Luckily being a parent and having much less time to create (compared to my childless days), I have had less creative blocks, because I don’t even have the time to create the things I want to. But self-doubt is something I’m very familiar with and I like to believe all artists are too – and that that’s what propels us forward as artists. And this idea in and of itself is a huge comfort. I keep questioning where I’m going, what I’m trying to convey and tell, what the whole story is and if it’s at all relevant or meaningful to me.

I think that’s actually a necessary thought process as an artist so I try to take it with humility.

SH: You’ve worked with inks, oils, wood, and even clay sculptural pieces. It would seem venturing into different mediums does not scare you. What inspires you to explore the different ways in which you express your artistic voice and how do you approach the learning curve in respect to also being a working artist?

SIH: Mostly curiosity and boredom. I often feel that aforementioned self-doubt and think maybe there’s a better way that I haven’t explored and/or what I’m doing isn’t working. Not having had formal art education and not having had exhausted all this during school might do this to you.

Learning curve of a new medium is a bit challenging while making your art the way you have. For me, I’m just trying to see if anything new sticks, but just like anything, you gotta put in your due time and effort to get the results. That’s why I haven’t showed that many sculpture pieces even though I’ve been “exploring” for years as I have not made many works I feel ok to show. 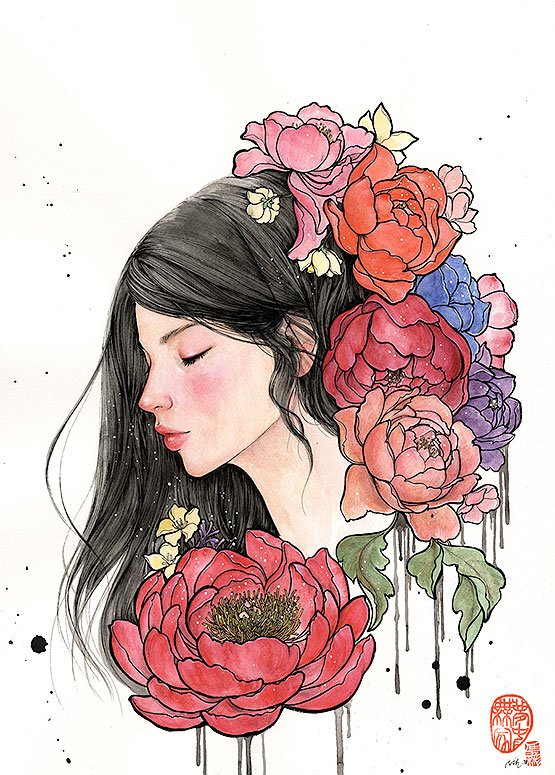 SH: What advice would you give other artists who want to explore additional mediums without losing their artistic voice or vision?

SIH: To be honest, I don’t know if I’m the right person to dole out this kind of advice. I feel like I lose my artistic voice and vision all the time. I do have to try to refocus myself otherwise I’ll be jumping around from medium to medium and just having fun. But being an artist is like any job in that you still need structure, due diligence, and self-discipline.

I try to set aside special studio days where I’m allowed to explore other things. Other times I gotta get cracking and do work!

SH: You have a lot of fans of your work, but whose work are you a fan of? What is it about an art piece that will draw you to it?

SIH: I have too many artists I admire to name them all but in general I am drawn to art that moves something inside of me by the unique way the artist has chosen to express “their stories”.

I have always felt like a blur of a person so people with strong identities and ideas really draw me in. And when they can express their unique world as art, it’s hard to not be in awe.

SH: You’ve moved around the country a few times, do the places you live influence your work? The New York years have a heavier color palate and stroke to it, whereas the Portland years seem brighter more colorful. Are we reading too much into this?

SIH: I think you’re spot on. I think also that the said geographic differences also coincided with different chapters of my life – we moved to Portland after we had a kid. So NYC was childless life and Portland is as a parent.

My life in New York was filled with incoming influences. I feel like the introvert in me always struggled to seek the quiet so I could figure out and listen to what I was trying to say with art.

Now in Portland with no family or close friends, I am able to focus and think a bit better. Becoming a parent, too, has had a huge impact on my outlook. My blurry edges as a person seem to have gotten a tad bit crisper – if that makes any sense.

I was never one to marvel so much at the flora of any given city but seeing so much of it in Portland really made me love it. My mom loved flowers and plants, and seeing so much of them here reminds me of her and her absence (or just the disconnection) a lot. Flowers that appear in my works these past couple years really is my effort to connect with my own mother as a mom myself now.

SH:  You and Audrey have shown alongside each other over the years, what is your favorite aspect of Audrey’s work and about her as a person.

SIH:  Audrey is just so talented and hardworking too. I love and admire her technical and stylistic consistency over the years, having a clear voice. Her clean, delicate lines and subtly conveyed emotions really makes you feel like you’re looking at a beautiful fragile being in a vulnerable moment.

One of the things that strike most people when they meet Audrey as a person, I think, is how humble and down to earth she is for the massive talent and following she has. She’s a very cute and adorable person with an immense talent, in my opinion. 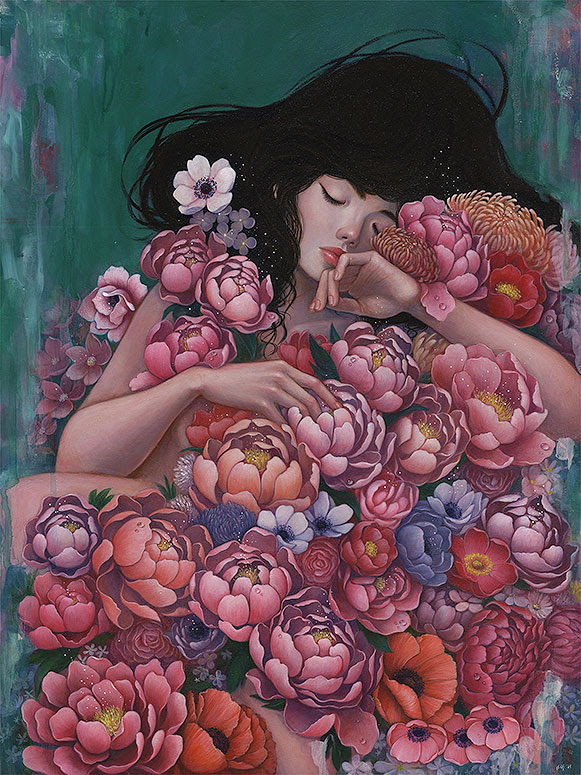 Please join us for our opening reception of Hollow Resonance this Saturday, November 12th from 6-9pm.