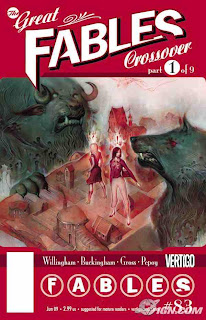 Last September, Fables fans got a bit of a shock. After 81 issues, Eisner-winning cover artist James Jean was leaving. The man whose work was infamous for his dazzling Fables iconography was moving on, and everyone wondered who would replace him.

Time has passed, and we are happy to announce that the new cover artist for the Fables series is none other than Brazilian artist Joao Ruas, whom we just started working with here at Thinkspace during The Drawing Room exhibition.
Ruas’ first cover will be for April’s issue #83 (shown above), which is the first part of “The Great Fables Crossover”, a nine-part story arc which will see Jack of Fables and Fables interact for the first time. 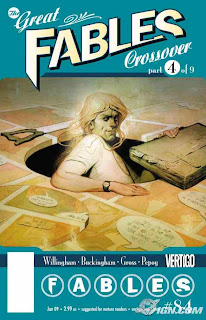 A glimpse at Ruas’ second cover, for issue #84, is shown above.
According to Ruas, he was in the midst of eating sashimi when he first received a phone call regarding the possibility of working on the Fables covers. Getting the job was a mix of excitement and fear for the artist. “It’s cliche, but the fact that I used to read Vertigo titles in my teenage years and now having the opportunity to be on the other side of the mirror is fantastic,” said Ruas. “Another [thing that excites me] is the range that comics can reach; I hope my work is able to say something to the readers. “Obviously replacing James Jean was the [most frightening issue]. He gave so much to the series with his amazing technique, but especially with his illustrative emotional storytelling that is hard to detach one from another. The other issue was the pressure, Fables is a big title and a lot of people will have opinions and judgments about my work. In the end, I just put the insecurity aside and started to paint.”
Read the full press release from Vertigo over at IGN, including a short interview with Fables writer/creator Bill Willingham, here: http://comics.ign.com/articles/939/939654p1.html
Look for more great new works to arrive soon to our gallery from Ruas, as we work towards hosting his debut Los Angeles solo show in the spring of 2010. The beautiful work we took to Art Basel – “Scowrer” – is still on hand (view a close up below). Please inquire if you are interested and view all our available works here. 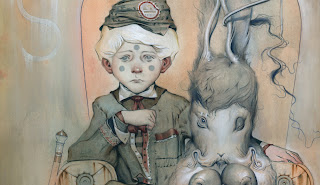 Look for more on Ruas in the coming months…
Joao’s site: http://souvlaki.jp-ar.org/