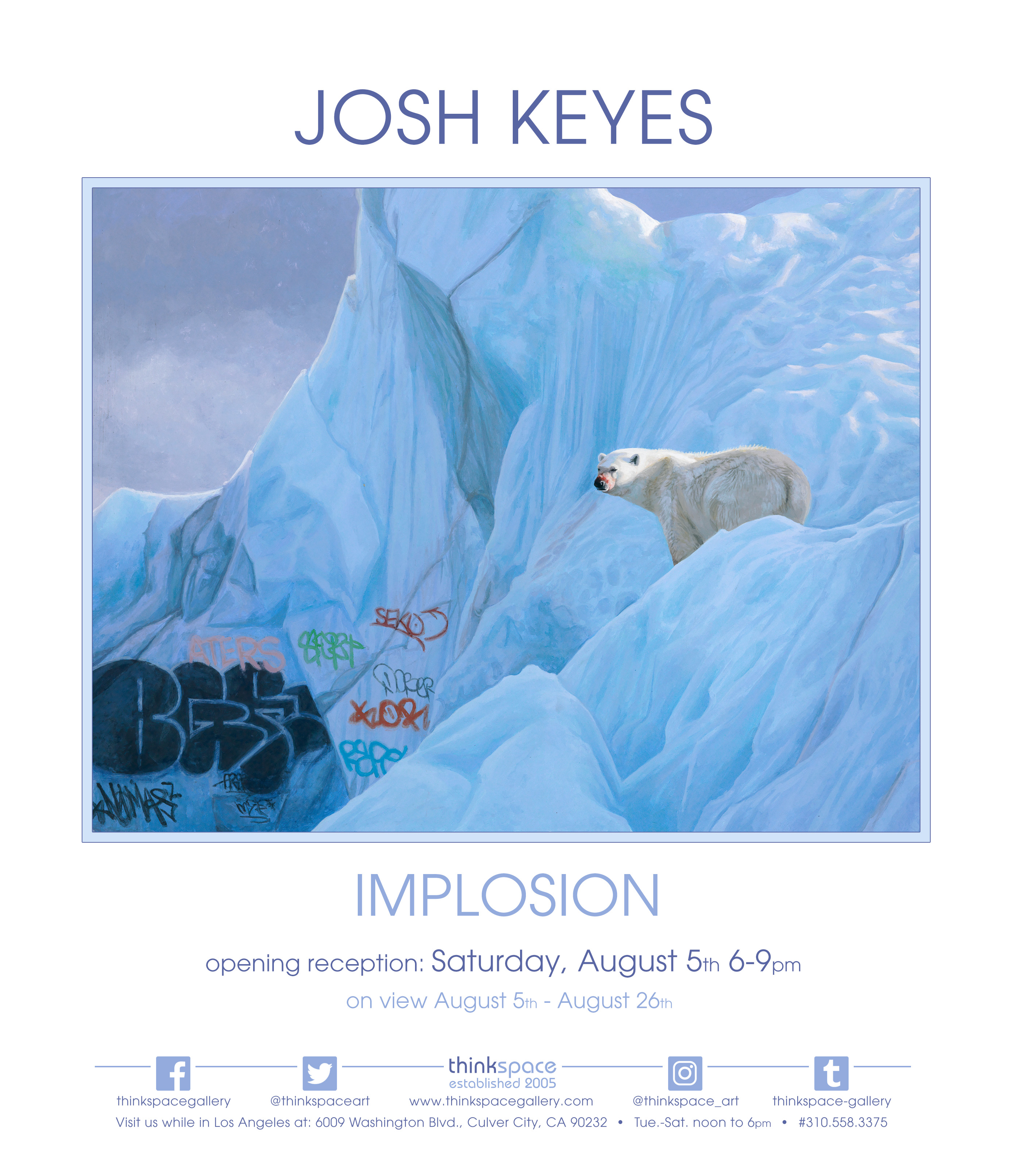 (Los Angeles) – Thinkspace is pleased to present Implosion, a solo exhibition featuring new works by Portland-based artist Josh Keyes. The artist’s first solo with Thinkspace gallery, and his first in Los Angeles in a decade, Implosion offers a fractured look at a dystopian and psychologically fraught post-human universe. This world, in which the remnants of an anthropomorphic past coexist uncomfortably alongside a displaced natural world, is immediately recognizable as Keyes’, a painter who has spent the last 15 years exploring civilization’s final frontier: a world dispossessed and in bleak transition.

Keyes’ unique type of “eco-surrealism” offers a cautionary swan song. In an ostensibly not so distant future, the natural world is caught in a fascinating, albeit tragically irrevocable, death spasm. Fallen, and taxed well beyond our current state of environmental depletion, this world is siphoned, its ecological exhaustion has led to inversion, dislocation, chaos, contradiction, and disjuncture. Water levels have surged, habitats are destroyed, unlikely species commingle, humans are gone, and the world has unraveled to a state of absurd disorder and irremediable loss.

Best known for his diorama style compositions, Keyes’ detailed paintings stage hyper-realistically rendered animals and objects against stark white backgrounds. This compositional device captures moments at a remove, as though they’re segments or cross-sections pulled from natural history museum models.  The animals appear in varying states of distress and deracination as nomadic wanderers in counterintuitive scenes. At times his specimens are on fire or submerged beneath water, at others they appear as partial skeletal remains or are erupting into butterflies, ever present in absentia, however, are the traces of human damage and intervention. There are never human subjects in his works, per se, but our deleterious presence resonates throughout in the form of street signage, urban relics, graffiti, dumpsters, cars, monuments..all of which feel tragicomic in the context of this post-apocalyptic wreckage.

Keyes has recently taken on filling the entire pictorial space, abandoning the white absence of the ground in favor of a more immersive take on his recurring themes and dystopian imagery. Rather than appearing as isolated fragments or decontextualized vignettes, the paintings present whole environments – a holistically reconstituted nightmare. Though he continues to create both types of work, each functions a bit differently – one at a conceptual remove through the use of the diorama device, and the other a fictional, though terrifyingly plausible, environment in its entirety – like a museum panorama or natural history exhibit. His quasi-taxonomies are poetic chronicles of disaster.

A personal psychic dimension also informs Josh Keyes’ surreal works. The recurrence of certain animal characters, for instance, take on cryptic personal significance in their reiteration. This visual mythology of intrusion and disenfranchisement also functions as an elaborate allegorical stage. Though clearly a requiem of sorts for an ecological doomsday, the estranged state of the human condition, not to mention its absurdity, is also at the forefront. Keyes taps into a poetics of loss and alienation through these extended animal metaphors; a space of longing and over saturation familiar to us all.

This implosive world is one in which the absurd reigns and the floodgates of order have collapsed in upon themselves. The laws of the natural world have eroded, and in the wake of this chaos are the traces of a manmade artificiality, tokens of the ruinous legacy left behind by its makers. Despite the clearly dystopian tone of this vision, something beautiful persists in the raw power of the natural world the artist depicts, the beauty of its harbingers, and the urgency of its, and our, vulnerability. Keyes’ intense psychological landscapes force us to reconsider the stability of the very ground we take for granted.