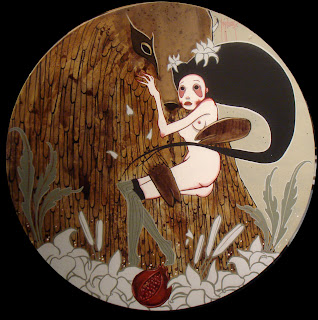 Simon Herbert recently wrote a great article for Art Ltd.‘s July/August issue about female pop surrealists. In the last paragraph he mentions Lesley’s work alongside some of the movement’s most respected artists. Nice timing with her big LA solo show on the horizon.

Here’s the link to the full article:
http://www.artltdmag.com/article.php?subaction=showfull&id=1215544867&archive=&start_from=&ucat=28

We just posted up a killer video trailer for Lesley Reppeteaux‘s “Tumbling” that was put together by Jeremy Asher Lynch and the fine folks at Modus Films. It can be viewed here: http://www.youtube.com/watch?v=N_6HGbnDZdo

More on this soon, but we can also confirm now that Lesley will be releasing two brand new limited edition giclees on the night of the opening -“Embrace” (as seen on the show postcard) and “Devotion” (image to be posted soon).

1) Please give us a lil’ background info on yourself. Where were you born and raised?
I was born next to the Atlantic ocean breeze, in Halifax, Nova Scotia. I spent a large part of my childhood there, and also on the west coast of Canada in British Columbia. I “grew up”, or spent most of my teenage years, in Las Vegas, NV. And trust me, I grew up fast.

2) If I came to your area, what would we do / where would you take me?
Portland is an awesome city. The Shanghai tunnel tour is a must do. Back in the turn of the century, people would go into bars on the west side and never be heard from again. There was this whole underground network of tunnels where they would kidnap people and take them to the river to sell them as slaves to ship captains. These poor souls would wake up and be in the middle of the ocean! Those tunnels (and trap doors in the bars) still exist and you can take a tour.

I’d also have you check out the Alberta Arts District, Mississippi Street and Hawthorne – those are where all the independently owned boutiques, artsy stuff & good eats are.

3) Did you go to college / art school? What are your thoughts on art school in general?
I graduated with a BFA in Illustration. I think having a degree is defiantly not a necessity in the art field, a strong body of work is.

However, sometimes a great school helps you along your path. My advice to aspiring artists is to take classes that interest you, don’t waste your time and money taking classes just to meet requirements. 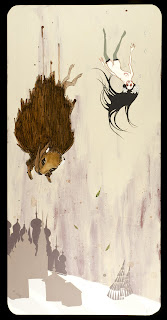 4) What’s your earliest memory involving art or creating art?
I used to save empty toilet paper rolls and would draw characters on them, then play with them like Barbies. I had a ton of Barbies, but making my own characters was much more fun.

5) When are you most productive / when do you normally work on art?
I used to work around the clock, from 10 in the morning until midnight or so. Now, my daughter keeps me on a different schedule – her schedule. Hah! I’m working less, and yet getting more done. I’m not sure how it works out, but maybe it has to do with me being in a perpetual state of happiness.

6) Tell us something about yourself that someone would never guess in their wildest dreams.
Hmmm, I don’t know if I’m all that wild. Maybe that next weekend is mine and my husband’s 10 year wedding anniversary (13 years together) and we are still mad for each other. I guess that’s pretty rare these days. We were married when we were 20. And also, we had a water birth with our daughter – au-natural. I am very confused by the need in our society to treat birth like a medical emergency.

7) Are you reading anything right now?
A lot of baby care books! Hah. Also, my friend recommended “The Untethered Soul” by Michael Singer. My mom and I are reading it together. 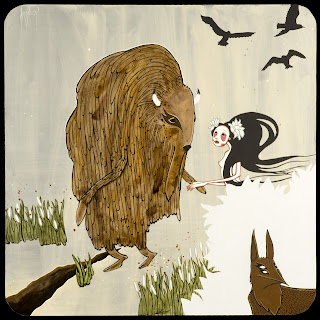 8) What’s your favorite color and why?
I couldn’t ever choose, I love so many. I do have colors that I can’t stand though – Vermillion green makes me gag.

9) Do you listen to music while painting/drawing? If so, do you have a current favorite that inspires?
I’ve been listening to Matson Jones, Rasputina, PJ Harvey, Iggy Pop. Mostly though, I like to listen to radio shows, or books on tape.

10) If you had to explain your work to a stranger, how would you do it?
It’s hard if they’re not familiar with the genre of pop surrealism or Illustration in general. I try to explain that it is heavily based on storytelling, with a dark slant and a feminine touch. Most people who don’t know a whole lot about art compare me to Tim Burton. I’ve heard it so many times, it makes me do an internal smile now. Not because I think it’s accurate, it’s just funny.

11) Talk a lil’ bit about the general idea/vibe behind your new series of works for “Tumbling”.
I wanted to create a body of work, that would tell it’s own narrative – much like I do when working panel-to-panel in comics. Exploring the myth of Persephone just seemed very right in this time in my life.

12) I know the show’s vibe is greatly inspired by a certain Greek myth, would you like to tell our readers a bit more on that?
Sure. It’s a story of love and loss, about the strength of women, and the bonds of love that hold us all together.

It goes a little somethin’ like this: Hades, god of the underworld, on one of his many visits to the earth, catches a glimpse of Persephone.

After meeting, they tumble together through a crack in the earth, where Persephone takes Hades as her husband and thus becomes Goddess of the Underworld.

Demeter – the Goddess responsible for the abundance of Harvest – is consumed with grief following the disappearance of her daughter, Persephone. She wanders endlessly through the world in search for her. Inconsolable over the loss, she refuses to allow anything to grow on the earth until Persephone is returned to her.

But Hades isn’t ready to lose Persephone either. He gives her six pomegranate seeds, which she eats. This act ensures that Persephone will spend six months of each year underground with her husband, one for each seed consumed. The other half of the year she may spend above ground with her mother.

Thus came about the four seasons of earth. When Persephone is above ground the world is in bloom, when she is below everything wilts. 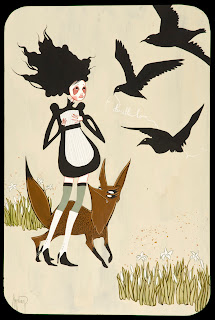 13) Favorite artist (living or dead) and what makes them special to you?
Well, I laughed a little when I read Stella’s interview last month, because she listed Egon Schiele – and he is my all-time favorite as well. I think he has influenced many of us with his beautiful and sometimes tragic figurative work. It stirs something inside of me, and I can not get enough of it. I also love John William Waterhouse, Toulouse Lautrec, Mucha, and so many more.

14) What have you got coming up in terms of shows and projects after “Tumbling”?
I’m working on a series of apparel designs for TAG Gallery, and have a 2-person with Amanda Marie in May. Mostly though I am trying to create thoughtful work and enjoy being a mommy.

15) You recently gave birth to a beautiful baby girl, Stella. How has that changed your outlook on art, if any, and did it influence the new works?
Stella has changed my outlook on life in so many ways. She has given us so much joy and warm fuzzies that I want to be near her and give her zerberts every second of the day. I’m not sure if she’s affected the overall themes of my work yet. I think I’ll have to look back in a while and see when I have some distance from what I’m creating now.

16) What are you doing right after this interview?
Grabbing an iced coffee and finishing up a painting!

The Reppeteaux clan will be in the house, so come on out and take in her new series of works and say hi – it’s going to be an amazing night… plus Zach Johnsen‘s critters from the Sunnyside-Yard will be dwelling in our project room alongside the wonderfuly strange works of Ireland based artist Paul Barnes.