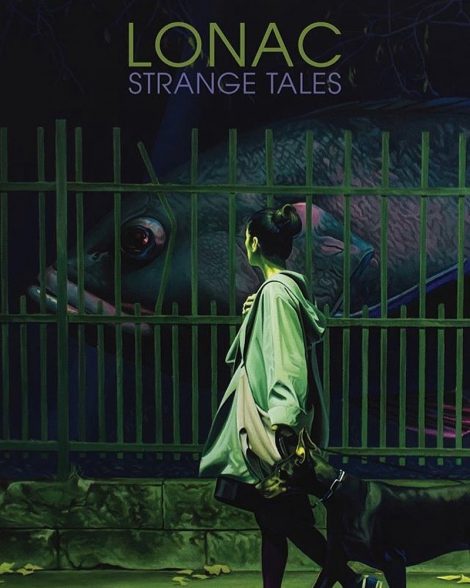 Thinkspace is pleased to present Strange Tales, the gallery’s first solo exhibition of new works by Croatian artist and street muralist Lonac. Currently based in his hometown of Zagreb, Croatia, Lonac has produced impressive large-scale, site-specific murals across Europe and worldwide, combining photorealistic rendering with illustrative and two-dimensional stylistic elements. His public murals are painstakingly detailed and primarily executed with spray paint and minimal brushwork, a technique he has self-taught and refined through extensive fieldwork over the years. In his solo debut with Thinkspace, Lonac will present new drawings, paintings, and sculptures, all inspired by his penchant for surreal storytelling.

Lonac’s earliest forays into mural making and street art predate his time spent in art school at the University of Zagreb’s Academy of Fine Arts. His first attempts were undertaken as a child on a wall in his backyard, followed by an experimental effort on the grounds of his primary school. This is one of those great apocryphal artist stories in which the art teacher, recognizing the ‘vandal’s’ talent, had the school council subsidize the cost of the young renegade’s art supplies. Since those first precocious initiations into the world of public art, Lonac has gone on to produce some of the most compelling murals in Bosnia, Croatia, China, Great Britain, Italy, the United States, Switzerland, and elsewhere.

The artist’s Croatian pseudonym translates loosely to ‘cooking pot,’ a nickname he hated as a child but went on to embrace while in search of a moniker as a young graffiti artist. After having spent his teen years as a graffiti writer, he began exploring figurative subjects and styles, expanding the scope of his aesthetic and the reach of his content. Working from a combination of influences, including a love of comics, graffiti, music, film, and an immersion in skateboard culture, Lonac developed a signature style that incorporates highly sophisticated representation with free association and surreal juxtapositions. His works often contain portraits of people he knows, including himself, his father, and friends, bestowing a level of intimacy and diaristic intimation to the imagery instead of a generalized anonymity.

Emotionally driven, Lonac’s works are often about personal disclosures and social commentary brought to life through the playful combination of the hyperreal and surreal. A recurring figure in his compositions, the bird, is often present as a symbol of war and peace, while other symbolic introjections appear with varied references to wildlife and natural imagery like fish, wolves, and owls, for instance. Used to embody or typify human behaviors, conflicts, or détentes, these poetic analogies contribute to the imaginative impact of the works while keeping them firmly in the realm of fantasy.

This allegorical penchant for extended metaphor is never far from Lonac’s imagery, nor is the tender observation of human foibles or their momentary redemptions. Some of his other subjects have included children in a tender moment of prototypical flirtation, the imminence of a couple’s approaching kiss, and a woman bathed in light while indulging in her morning ‘vices.’ Other murals have included a giant architecturally sized squirrel scaling the side of a building, an emancipated beatle newly released from a jar, the artist’s father at work on the construction of a ship model, and a woman’s reaction mid-result of a ‘he loves me, he loves me not’ petal-plucking ritual. Another still, depicts a pumping anatomical heart in which the building’s ducts become arterial extrusions structurally incorporated into the piece; an animation of this phenomenal mural went viral at the beginning of 2016.

Lonac encourages images and references to interact freely in his works in unexpected ways. This world in which logical boundaries are temporarily suspended delivers with playful pathos to reveal a rich spectrum of human vulnerability.