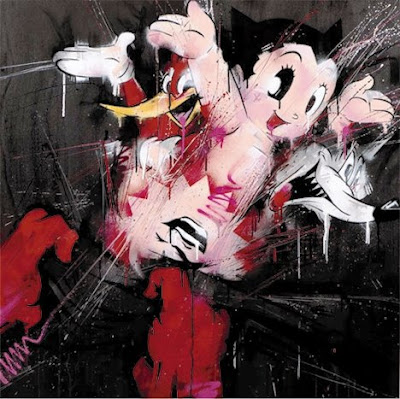 ‘Crime & Charity’ is a selection of mixed media on wood works by MEGGS, one of Australia’s pioneering street to gallery artists. Pop culture references tinged with nostalgia for childhood heroes and villains, Meggs’ eclectic works explore the notion of duality and the on-going question of morals, rights and authorities. Reflecting on personal experience, Meggs produces energetic depictions of heroes, villains, and subverted collages of pop culture symbology.
Meggs’ work has been exhibited internationally and is included in the National Gallery of Australia’s permanent collection. 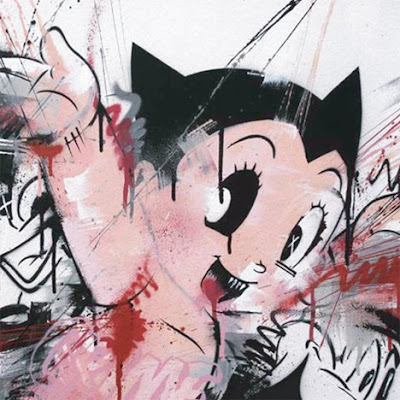 In 2007 Australia’s Victorian State Government passed the ‘Graffiti Prevention Act’. This legislation extended the government’s zero tolerance approach to Graffiti and provided police new authority to search any person, vehicle or object they suspect to possess a Graffiti implement, within close proximity of public transport. Ironically, this legislation was passed while Tourism Victoria was using Graffiti and street art to promote Melbourne Tourism on television and web advertisements. Melbourne’s laneway’s are a big drawcard for tourism and it is undeniable that the diverse artwork is part of the city’s broader cultural appeal.
Graffiti and street art will never disappear. Despite the State Government’s negativity, there are well documented social contributions and benefits provided by many artists, cultural tourism being one. Unfortunately these are only recognised when it is conveniently leveraged for commercial gain.
‘Crime & Charity’ depicts the frustration Megg’s feels in the face of this hypocrisy. The characters depicted in his artwork are hybrids of guilt and innocence, both frustrated and persecuted for being part of a culture that is simultaneously celebrated and condemned. 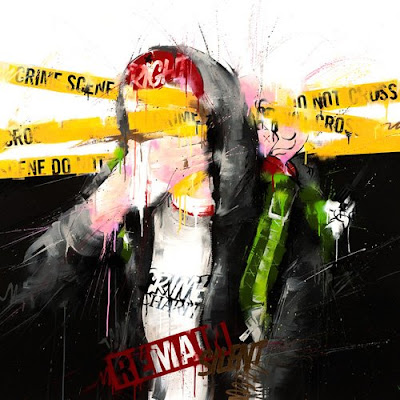