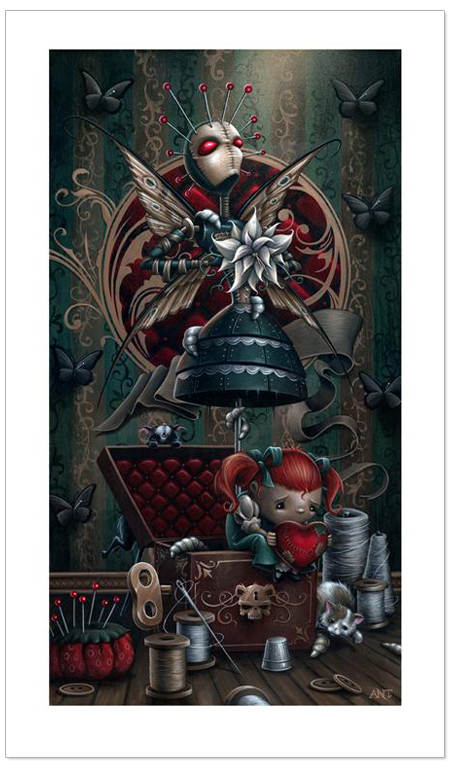 This particular work from Anthony was one of the highlights of our recent ‘Give Me Space To Think’ pop-up show in Marina del Rey.

About Anthony Clarkson:
The art of Anthony Clarkson is a portal into child-like innocence, mixed with troubled spirits, broken hearts and a sense of emptiness. When Clarkson graduated from the Colorado Institute of Art in 2002, he was resolute in his decision to make a living as a graphic artist in the music industry. He was hired as the head graphic designer for a prominent record label in Los Angeles shortly thereafter. Embracing a vibrantly hyper realistic digital photo-manipulation technique, his first published album cover followed shortly after joining their ranks and quickly established a long list of published album covers for several bands on various labels.

Clarkson’s art has been showcased in several galleries in the United States including Thinkspace, DvA Gallery, Gallery 1988, Cannibal Flower and Copro/Nason. Exhibitions of note include special curated exhibitions that were dedicated to Mattel/Hot Wheels, Marvel Comics (hosted by Stan Lee) and Crazy for Cult 2 (hosted by Kevin Smith). Clarkson was also featured in the ‘Intersections’ show at the Cypress College that took place during the spring of 2008.

Clarkson’s vision continues to expand as his paintings evolve into more intense expressions of his own dark thoughts.

Look for Anthony in our upcoming 5th Anniversary exhibition this November along with other group shows throughout the year.