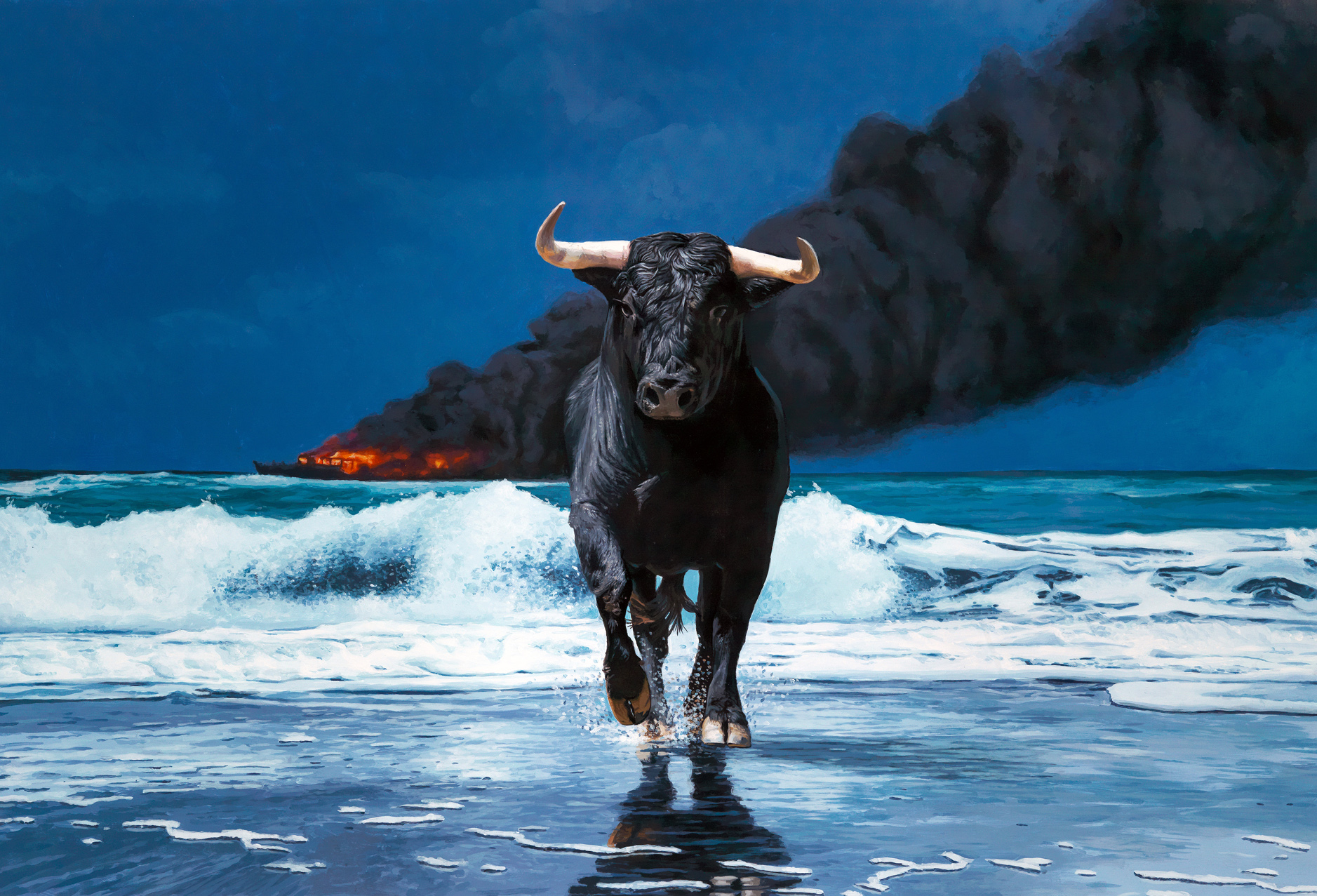 (Los Angeles, CA) – Thinkspace is pleased to present new works by Portland-based artist Josh Keyes in Tempest. Keyes creates lush, hyperrealistic paintings of our civilization’s dystopian aftermath; a post-human planet left ecologically ravaged and dissipated, sits aflame, overgrown or beneath water, while a new natural order attempts to reclaim its disastrous inheritance. In recent years, Keyes has abandoned the minimalism of his precise, dioramic disaster taxonomies in favor of a more immersive and expanded pictorial frame. These works depict entire environments rather than only its cross-sections in a not-so-distant future state of ecological ruin. Keyes has mastered the satirical posturing of hyperbole as fact with a world so convincingly rendered, and so disastrously surreal, that fantasy becomes alarmingly plausible. In Tempest, Keyes conjures an insolvent wilderness facing the eye of a final storm.

Keyes’ highly detailed narrative paintings have evolved from their earlier iteration as closed systems, or quasi-scientific specimens drawn from some post-apocalyptic natural history museum to less confined and formulaic expressions of an imploding natural order. Displaced wild animals and the remnants of human architectures and monuments are all that remain, the only living witnesses to whatever final or cumulative set of events have finally tipped the scales beyond salvage. Recent works have depicted wholly submerged forests, graffiti-tagged marine life, and itinerant polar bears wandering an environmentally exhausted earth. Here, human monuments are drowned by the deluge and incongruous combinations abound as displaced rhinos run rampant beneath abandoned urban underpasses. The traces of our destructive legacy even appear in space, harkening dystopian visions of the final frontier – humanity’s last escapist fantasy of evacuating the planet it has consumed.

Animals have always appeared as the focal points of Keyes’ metaphoric, and psychologically penetrating works. He depicts them with the anatomical precision of a biologist and the poetic freedom of a storyteller. As protagonists, creatures universalize the narratives, making them indiscriminately relatable and empathically accessible. Charged with the psychic and imagistic resonance of a shared, collective subconscious, Animalia provides the artist with a symbolically valent source of iconography. This combination of the personally inflected and the culturally drawn supplies the artist with an inexhaustible source material.

Working primarily in acrylic on panel, Keyes has perfected his hyperrealistic painting technique, depicting the environmental crisis with startling representational clarity as a trope for the larger human one. It becomes clear that the imagining of this apocalyptic chaos harbors a social anxiety that extends far beyond the concerns of the ecological. In a time of great political angst and uncertainty, the artist’s works are all the more poignant as harbingers of a, now more than ever, alarmingly plausible doomsday. Keyes, the dystopian naturalist, continues to provoke our imaginations with the poetry of a cataclysmically surreal future tense.