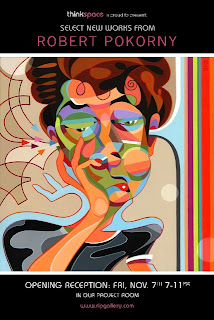 ALSO SHOWING IN OUR PROJECT ROOM THIS NOVEMBER:

ROBERT POKORNY aka RIP has been doodling in art since he was a day dreaming boy and was influenced at a young age by such visuals as Wacky Packages, Looney Tunes, and Mad Magazine. Pokorny’s art has been described stylistically as work that turns on every dime, quirky, engaging, a high quality of imagery with a visual ambush that catches the viewer off guard.

Robert’s clients have included Capitol Records, DreamWorks, Geffen Records, Astralwerks, EMI and Pepsi. In 2006 Pokorny’s posters were in an exhibition; The Graphic Noise Show, which toured Galleries and Universities across America and were displayed at “Plug” – The Independent Music Awards.

In 2007 two of Robert’s pieces were chosen by the Society of Illustrators of Los Angeles to be published in the Limited Edition Illustration West 45 Book. These pieces were on exhibition at The Billy Shire Fine Arts Gallery.

When Pokorny isn’t thoroughly buried in all things visual he can be found spending time with his wife Charlene, daughter Serena and his wiener dog.