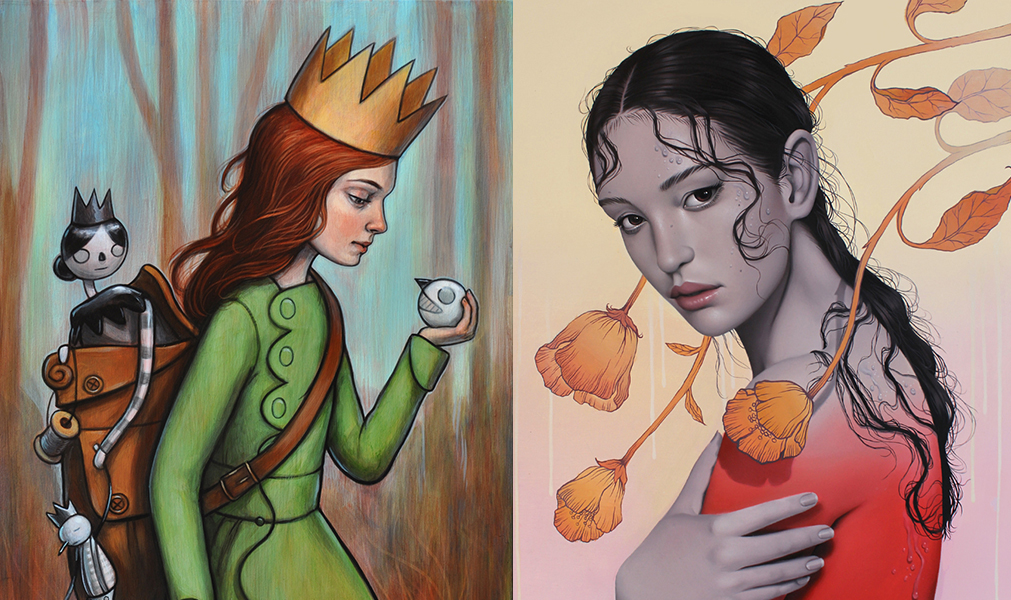 Thinkspace is pleased to present new works by Canadian artist Sarah Joncas and Southern Californian artist Kelly Vivanco in Betwixt and Between. An exhibition about the creative potential of unscripted spaces and the generative possibility of in-betweens, Joncas and Vivanco, forego the limits of the aphoristic for the contiguous freedom of the fable. Both create narrative-based works that embrace the ambiguity and imaginative potential of the subconscious. Creatively playful with elements of the surreal, they capture a feeling of melancholia and aesthetic nostalgia in their styles, Joncas with her cinematic invocation of neo-noir film and Vivanco with imagery influenced by classic fairytales and vintage illustration. Fundamentally, both artists’ work offers an intrinsic pleasure in viewing and the kind of escapism possible only in worlds that lie beyond rationally dictated limits.

Toronto-based Sarah Joncas first exhibited with the gallery in 2009 when only 19 years old. Since then, her accomplished work has developed technically and conceptually, garnering international attention for its moody stylization and emotive impact. Her portrait-based paintings focus primarily on female subjects that function as alter egos or symbolic avatars for social, psychological, and personal themes. The figurative becomes a vehicle for more existential and constructivist emphases, an armature around which to posit narrative suggestions and symbolic inferences. Always striving to create a moment of discomposure or tension in her works, Joncas aestheticizes with melancholy and melodrama, tapping into an emotionally charged visual spectrum.

Joncas began her art career intending to pursue illustration and animation, directions that clearly still inform the visual diction of her current work. Highly refined areas of figurative rendering, like the lush skin tones she achieves with oils, are combined with elements of a more graphic sensibility, executed in acrylics, to establish compelling visual tensions between realistic dimensional space and flattened stylization. An early interest in animé and manga, as well as in those neo-noir cinematic references aforementioned, helped to galvanize Joncas’ interest in character-based works. Often posited in heightened emotional contexts, her protagonists are framed by suspenseful allusions to an overarching story or caught in the midst of ambiguous or invisible unfolding scenes. This penchant for plot, mystery, and symbolism is captured in moments of dynamic stillness in which action is both suggested and seized. The surrounding elements in her works, whether animals, objects or patterns, take on concomitant meanings, further reinforcing the larger thematic intimations of her works.

Based in Escondido, California, Kelly Vivanco’s depicted world is one of fantastical tall tales and mysterious encounters. Not unlike the magical wardrobe of C.S. Lewis’ Chronicles of Narnia or Lewis Carroll’s Alice and her rabbit hole or fugitive fleet through the looking glass, Vivanco’s paintings themselves are thresholds. Each is an aperture into an alternate world of enigmatic episodes and apocryphal creatures, at times beatific and at others unsettlingly sinister; these storied landscapes and characters are more brooding and mysterious than flippantly whimsical. Playful and nostalgic, however, her works are far from sentimental or honeyed. Like the best fairy tales and all of their allegorical apologues, a darkness lurks in the beauty of their imaginative distortions and hyperboles.

The subconscious undeniably shapes Vivanco’s images. By exploring her figurative subjects through surreal shifts in scale and shadowy casts of mood and light, her paintings feel like their drawn from the recesses of dream. Psychologically inflected, the depictions of her characters range from the lighthearted to the more somber and foreboding. Vivanco works primarily in acrylic on panel and canvas, and her stylized hand is immediately recognizable, as is her signature palette of muted and darkened vintage-inspired colors. The speculative scenes she stages remain slightly intangible; we are given moments from a more substantial story that is then left to our imaginative work to unfold. The mystery lingers in these captures, as little is explicitly unraveled but rather implied. In addition to her fine art practice, Vivanco has been commissioned to illustrate children’s books, including Snow White and the Red Rose in 2014 and her second, Thumbelina, in 2016.

Both Joncas and Vivanco, though distinctly different in their unique styles, share an interest in the tangential work of the subconscious and all of its surreal textures and, potential, looking to the symbolism of the strange and relinquishing control of these mysterious spaces to the unscripted nature of its “in-betweens.” The ambiguity of their worlds is one in which enigmatic encounters remain partially unseen, and the suspenseful irresolution of the unknown lingers; whether through allegory or avatar, both Joncas and Vivanco look to the openings rather than the seams. 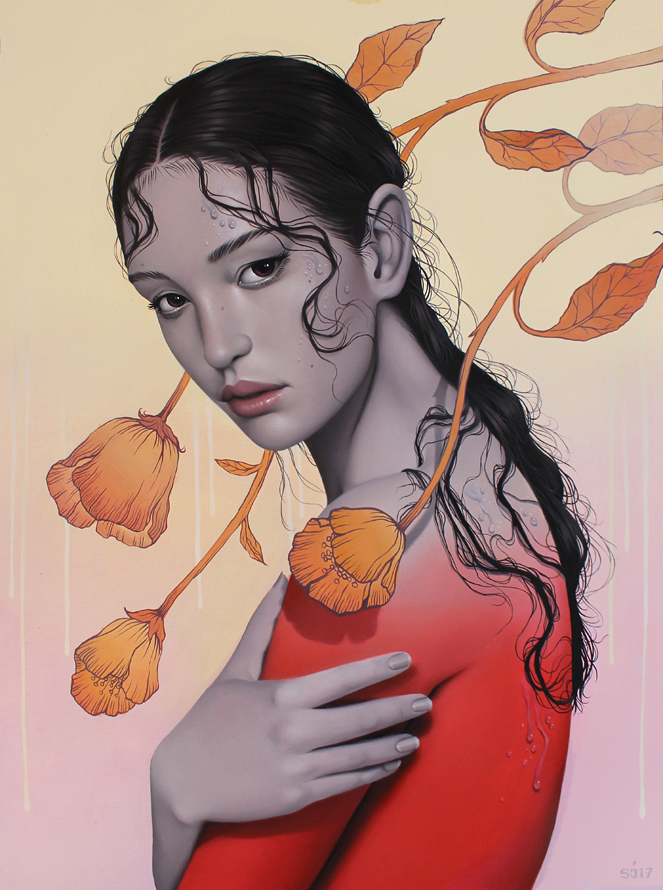 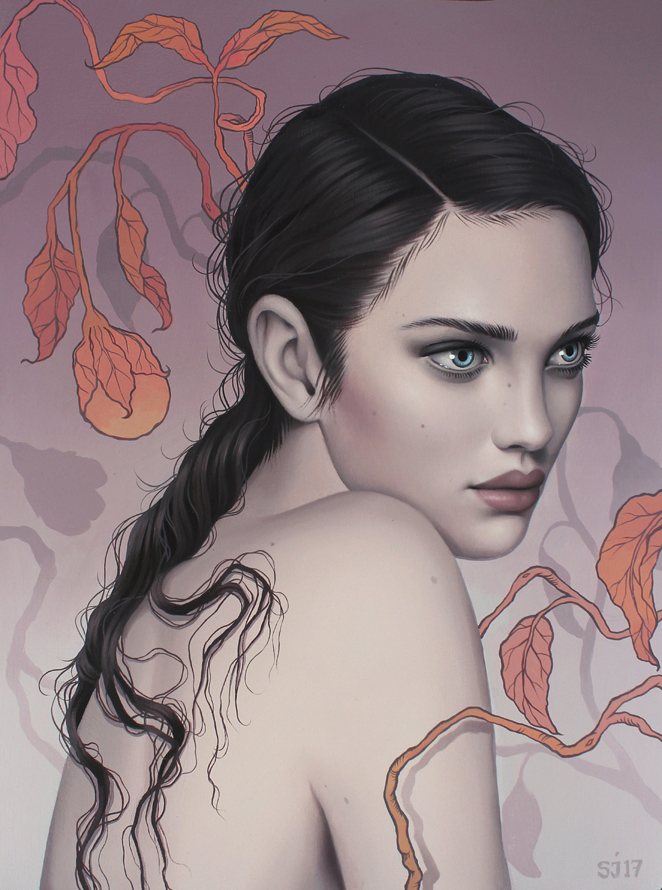 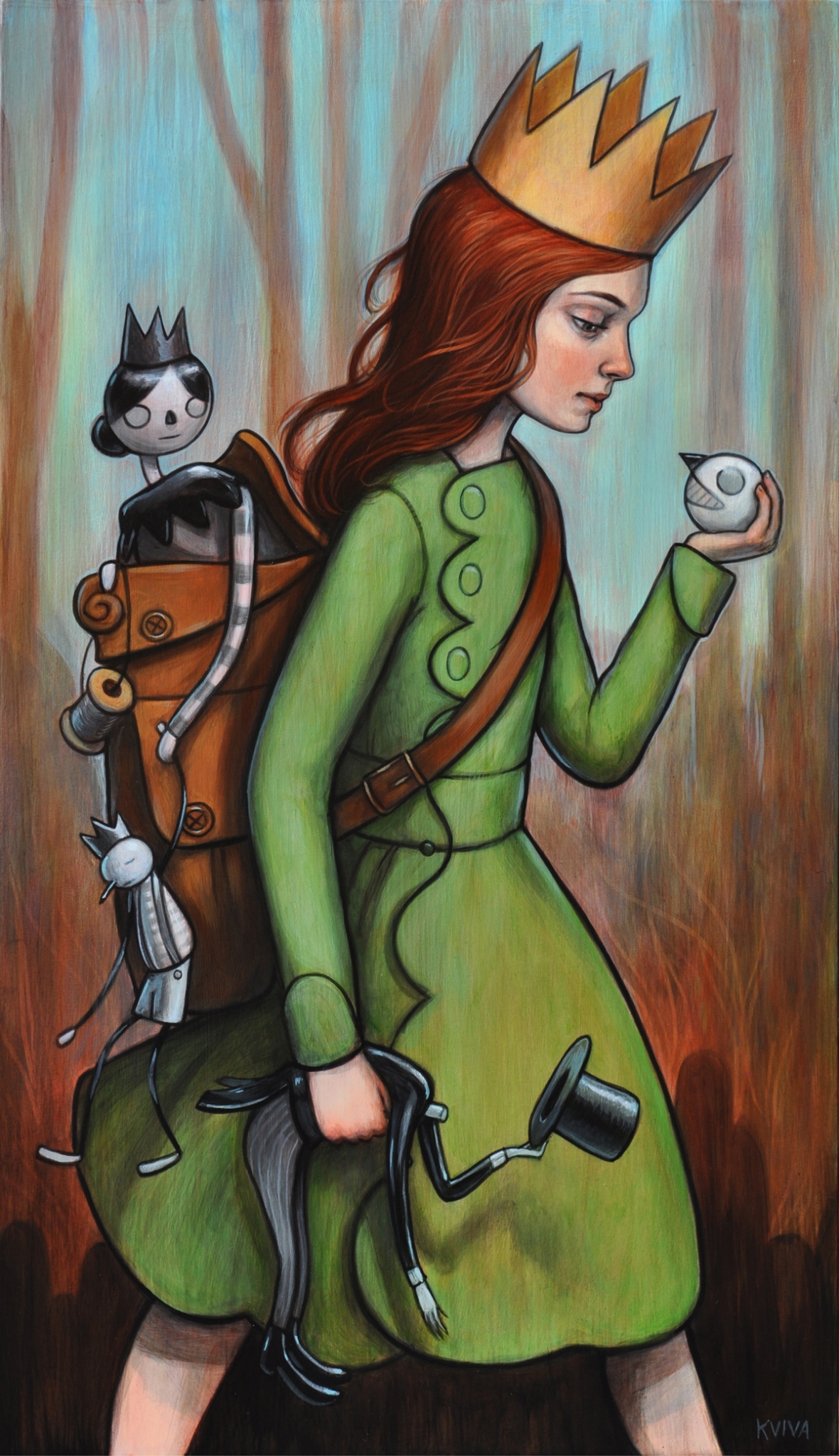