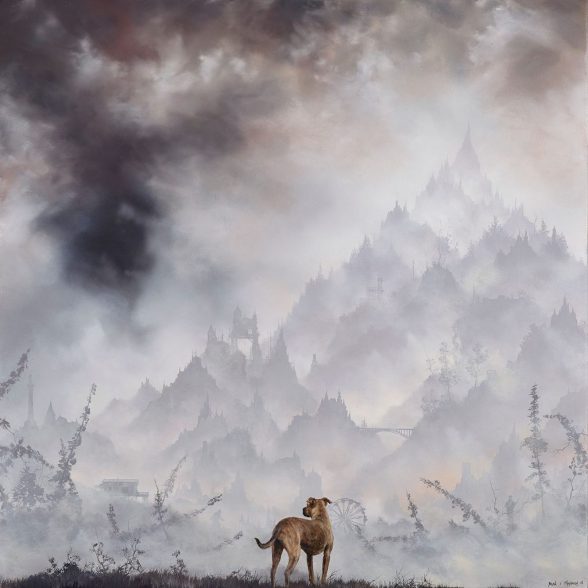 Behind the misty fog and low thick clouds,  Brian Mashburn hides landmarks and symbols that create the story of “A Sublime Object.” For his latest exhibition, Origin Stories, now on view at Thinkspace in Culver City, Mashburn lets us into his world with anecdotes that accompany various pieces. Below highlights the reference points hidden in plain sight within “A Sublime Object.” 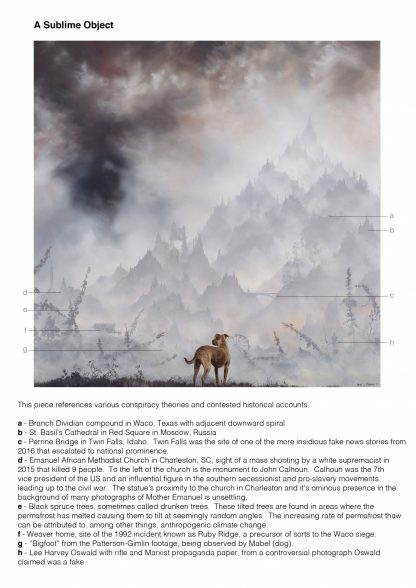 b – St. Basil’s Cathedral in Red Square in Moscow, Russia

c – Perrine Bridge in Twin Falls, Idaho.  Twin Falls was the site of one of the more insidious fake news stories from 2016 that escalated to national prominence.

d – Emanuel African Methodist Church in Charleston, SC, site of a mass shooting by a white supremacist in 2015 that killed 9 people.  To the left of the church is the monument to John Calhoun.  Calhoun was the 7th vice president of the US and an influential figure in the southern secessionist and pro-slavery movements leading up to the civil war.  The statue’s proximity to the church in Charleston and it’s ominous presence in the background of many photographs of Mother Emanuel is unsettling.

e – Black spruce trees, sometimes called drunken trees.  These tilted trees are found in areas where the permafrost has melted causing them to tilt at seemingly random angles.  The increasing rate of permafrost thaw can be attributed to, among other things, anthropogenic climate change.

f – Weaver home, site of the 1992 incident known as Ruby Ridge, a precursor of sorts to the Waco siege.

g – “Bigfoot” from the Patterson-Gimlin footage, being observed by Mabel (dog).

h – Lee Harvey Oswald with rifle and Marxist propaganda paper, from a controversial photograph Oswald claimed was a fake.