Allison Sommers has been a part of the Thinkspace family for over a decade now and we’ve loved watching her work evolve over the years. In anticipation for her upcoming exhibition Bruxism, we have an interview with Allison Sommers discussing her inspiration and what Eau de Sommers would smell like.

SH: What is the inspiration behind this latest body of work?
AS: Most directly, the work probes the twinned experience of personal anxiety and the macro fin-de-siecle distress of the current political, civil, environmental, existential moment. I’m dealing less with the actuality of anything in particular than the expressionistic physicality of it— the falling-apart, the chewing-of-nothing, the grasping-at-past, the disquietude of even existing at all right now. There are explorations of embodiment and disjointedness that are continuations of themes I’ve been digesting for a few years, and a nod to a particular piece I’ve seen from Pergamon, which planted the seeds for a lot of the disintegrating classical bodies I’ve been playing with lately.

Bonus Story: I first saw the Pergamon Altar and the various other pieces that informed my work in Berlin a few years ago; oddly enough, they were in New York this year for a wonderful exhibition at The Met. I was lucky enough to be invited to a lecture and reception a few months ago, where I actually met the fellow who “discovered” this monumental head– it had been forgotten in storage for decades, and he stumbled across it and helped research and bring it to its current prominent position in the collection. Isn’t that funny! 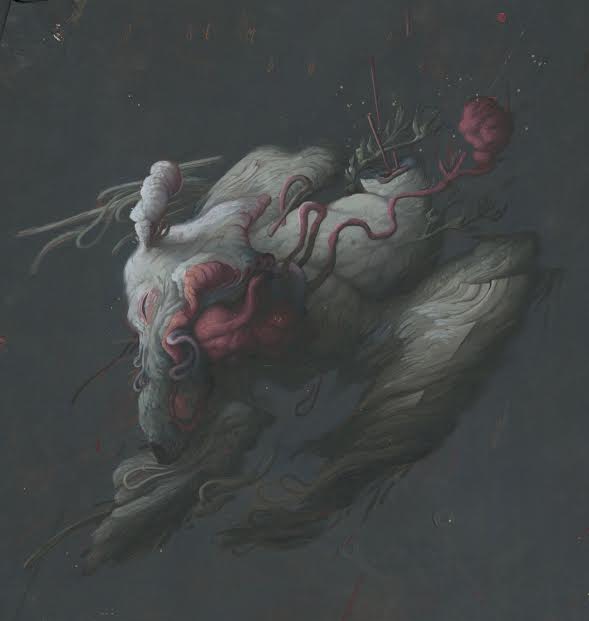 SH: You’ve been showing with Thinkspace for the last ten years. As an artist, how do you push yourself artistically without compromising your unique style?
AS: I’ve been extremely lucky that Thinkspace has been along for the ride for almost a decade because I have indeed been evolving my style over the years. One of the best antidotes to stagnation, I think, is curiosity, or boredom, however you want to put it— I’m constantly mining my influences and circumstances for new ideas, constantly becoming obsessed with this work of art or that film or diving into this other new book. I feel like my work evolves pretty organically as I eat through all the art and culture around me. I follow where the thread leads, without too much concern as to how it relates to previous work, but my work is grounded in my hand, if that makes any sense, and therefore has at least a soupçon of unity, I hope.

SH: Do the characters you paint constantly live inside your imagination and you have to race to capture their story? Or are the scenes you capture created in the moment of visiting them?
AS: I don’t really approach my work, or art-making, in that way— I don’t have “characters” per se, but rather, perhaps, expressionistic stand-ins that anchor the paintings. They’re less narrative “scenes” so much as they’re fillings-of-blankness, emptyings of my hand and mind. 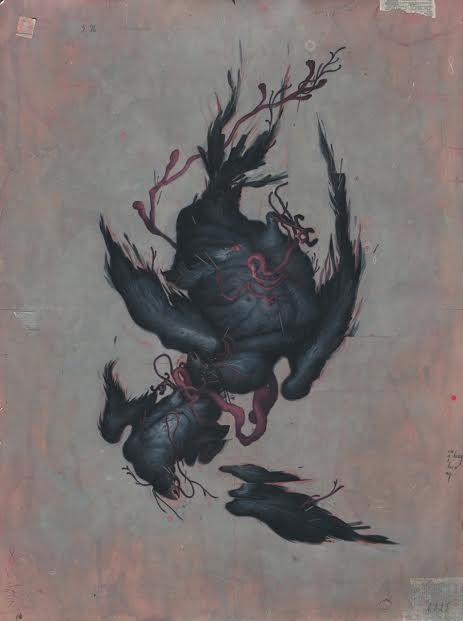 SH: What’s a common misconception about you, your art, and about artists?
AS: I can’t speak for other artists, but I bristle at exegesis most, I think. I completely understand the desire to have a painting mean something, or to have the painter tell you his meaning for his work, but I’d rather the viewer take their own journey there, since understanding mine is necessarily impossible. There’s no allegorical equation here. Half the time, I don’t know what my own work means, unless I’ve spent some serious time navel-gazing after the fact.

If I were to say anything against misconceptions about other artists, I’d quote Baldessari: “talent is cheap.” The work of art is located in the je ne sais quoi, not how well painted the piece is. Well-painted art is deadly boring, if that’s all it’s got going for it.

SH: If a perfume was made based on your latest body of work, what would the scent smell like – the notes?
AS: It’d have to be a little salty, a little spitty, with a floral aspect like the most shameless flowers— the magnolia or so— that just smell so overwhelmingly yellow like a wet cloak, like hot fresh cream, like coitus. Like the smell of the inside of a clean, greasy animal skull that’s been in the warm ground, sweet and familiar and unhappy.

SH: What are your favorite tools of the trade?
AS: Have (Alvin Draft-Matic) pencil, will travel. I have a library of Moleskine watercolor sketchbooks in my fire safe. Also, of course, gouache, watercolor pencil, copier pencil, chalk, a few crayons I found on the ground… nosebleeds collected in jars… 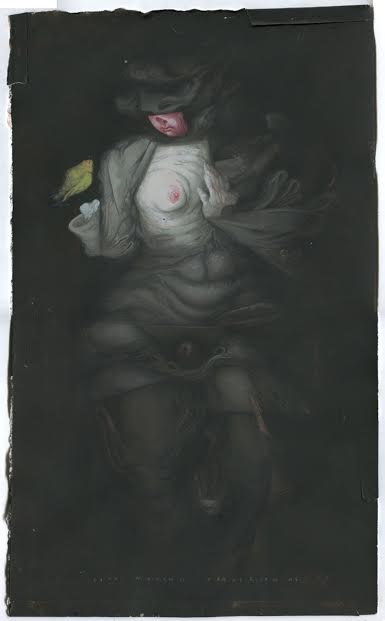 SH: Your work is incredibly meticulous and you’ve shared that it’s had an effect on your eyesight, how are you dealing with this change?
AS: Well, I’ve been scaling my work up over the years, so I’m feeling fewer effects on my eyesight than I had previously. As the title of the current show suggests, I’m actually having more of an effect on my body through anxiety.

SH: What elements of other art inspires you? What artists are you fawning over right now?
AS: I’m omnivorous when it comes to art, and right now I’m stuck orbiting twin suns— I have this somewhat inexplicable obsession with seventeenth and eighteenth-century painting right now, which I used to rather despise; have been spending a lot of time at the Frick and the Met. At the same time, I’m absolutely in love with the frenetic multi-discipline work of a few more current fellows whose large-scale pieces I’ve seen over the past year— William Kentridge at both BAM and the Met, for one. I aspire to combine more film, moving sculpture, poetry into my work like that, with hopefully an iota of the energy with which he manages to pull it all together. I was elated to see Marcel Dzama’s recent collaboration with the New York City Ballet, I’ve adored his work for years, and it was thrilling to see it put to such a large scale. Some of the current assemblage works I’ve been producing owe an obvious debt to Cornell and other similar artists. So, I’m pulled towards the foofy bewigged floral stuff on one hand, the gooky, gestural, modern mass ornament on the other. 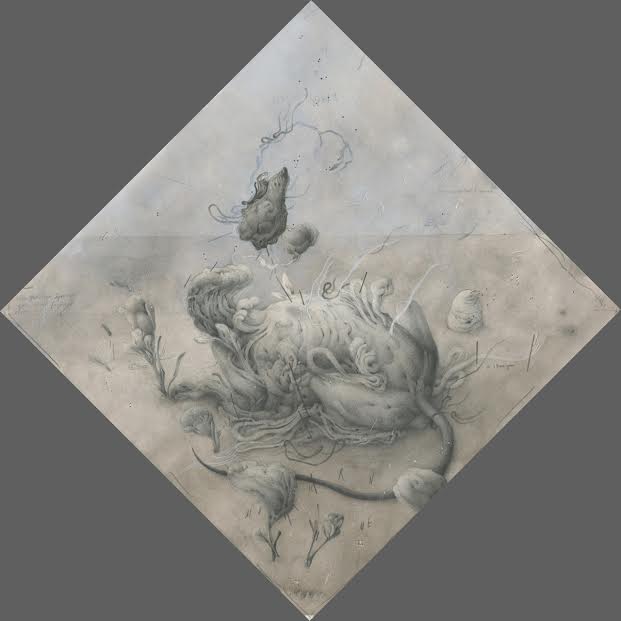 SH: For those not familiar with your work or artist background? What inspired you to pursue a career in art, most artists and creative people are making things since their childhood but there is a significant difference between having artistic talent and being a full-time artist. What drives you?
AS: I am one of the “most” here, having been making things since childhood, and taking the utmost pleasure in it. I didn’t go to art school, and after University ended up turning an internship at a newsweekly into first a graphic design job and then art directorship. By that time, I was already working with Thinkspace, so I did my painting at night after work, and was thoroughly exhausted and frustrated, so by the time that we moved to New York, I knew that I wanted a path bending more directly towards my art (“sh*t or get off the pot,” as my folks would say). So, I tried to take all the time that I’d given myself by only taking part-time and, eventually, no-time work, and just filled every hour with drawing (and the flaneuserie and indulgent self-contemplation requisite of an artist). I’ve been extremely fortunate that somehow this all can be rounded up to being a full-time artist. It’s cliche, but I really can’t imagine doing anything else, and I’m so incredibly grateful that, at least right now, I’m able to have the luxury of so doing.

SH: What were you listening to during this latest body of work, podcast? Playlist? Netflix?
AS: I am only exaggerating a little when I say that the first month or so of work, I only listened to “The Wall” and then “Golden Brown” by the Stranglers, over and over. It’s my power music. No apologies for the big gobbets of prog-rock I listen to. I spend a lot of time listening to the radio— WNYC for at least six hours a day, WMFU in the evenings sometimes (Dave the Spazz’s show on Thursdays, in particular). Our classical radio station in New York is abysmal, so sometimes I’ll check in online with WETA, which I used to listen to when I grew up in Maryland. There’s a little radio station that popped up this year in a shipping container a few blocks away called “The Lot” that has given me an incredible amount of pleasure over the hours and hours in the studio, and I love that I can just zip down there with the dog and draw in their little yard if I can’t stand being inside anymore. I try to never miss Chances With Wolves’ show. Over the last few weeks, I’ve been listening to the playlist that I made for the show opening, so I suppose folks will get a bit of what my aural background was when I was wrapping it all up. If I must watch a video whilst working— I think it’s bad for your art, but sometimes you need something to push through the long late hours— it’s usually “Downton Abbey” or “The Knick”, or “Call the Midwife” if I’m feeling a little weepy. 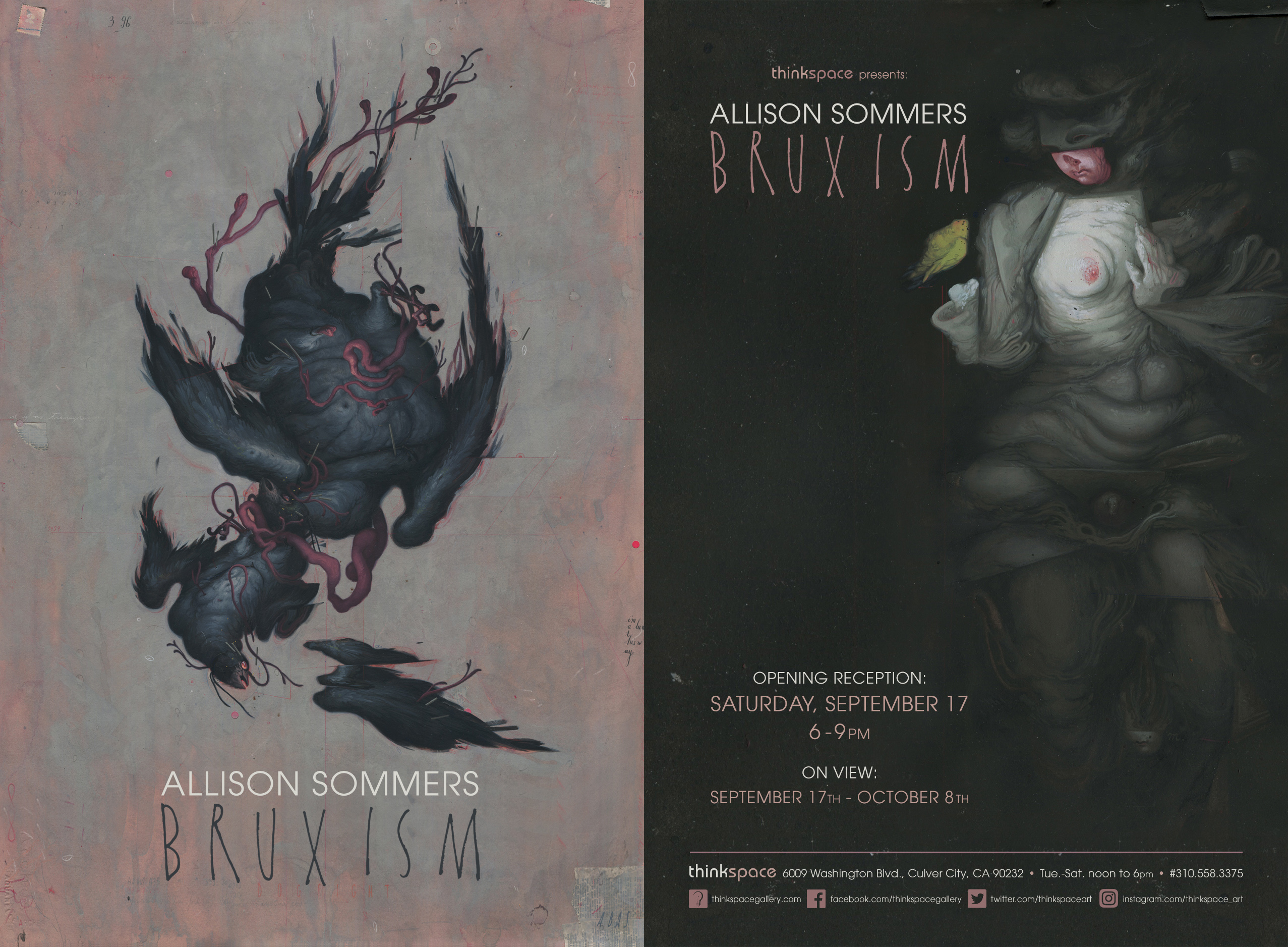 The opening reception for ‘Bruxism’ is next Saturday, September 17th from 6 – 9pm. Visit our website for more information on Allison Sommer’s ‘Bruxism’.

Can you share a lil’ bit about your new body of work for ‘Potter’s Field‘?
Potter’s Field is a delightful little cabaret of war, wartime, warpeople, and war fatigue. An opera for all and none.

What fuels you to keep creating?
Well, I’m rather fidgety….

Please describe your dream project if time and money were not issues.
There are a thousand of them. Recently I’ve been fantasizing about immersive paintings, as a small room, or a pod sort of thing – where discomfort and perhaps the fear of the viewer alter the meaning of the painting before them.

Favorite item in your studio?
Perhaps my Steiff Mecki. Or my taxidermied fox, Horace.

Is there anyone in particular, artist or otherwise, that you’d like to give a shout out to here?
The work of Brecht was very influential for Potter’s Field, as was that of Dix and Kollwitz, all both aesthetically and politically.

Any shows or special projects coming up after your exhibit with us here at Thinkspace you would like to mention?
2012 will have gobs of good things! Folks’ll have to stay tuned. 🙂

Check out the works in “Potter’s Field” here:
www.thinkspacegallery.com/2012/01/project/works-AlPotTr.php