“RIP, V8″ – acrylic & collage on board – 12×28”
Reuben Rude was born in San Francisco, as the sun was setting on the Free Love era. His bohemian parents then moved “back to the land” to the woods of Northern California, where he spent the better part of his childhood without a television. This lack of technology forced him to spend almost every waking hour drawing and painting. When he moved back to the city to attend art school, he got into all the usual trouble with graffiti writers, skateboarders and art students. He now lives in San Francisco with his wife and eight-year-old daughter, and yes, a television. However, he still spends most of his waking hours drawing and painting. Sometimes he even gets paid for it. 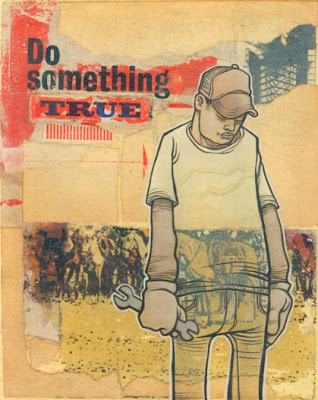 “Do Something True”
acrylic and collage on paper8.75 x 10.75″
Join Reuben tomorrow night to help him celebrate the opening of his debut LA solo show. The sneak peeks offered above only hint at the goodness to come tomorrow.
Tue, June 23rd 7-10PM
Gallery 1988 Los Angeles
7020 Melrose Ave in Los Angeles / 323.937.7088
“Americana” featuring new works from Reuben Rude
(On view through July 11th)
www.nineteeneightyeight.com