In our main gallery:
Sarah Joncas & Camilla d’Errico
‘Beauty In The Breakdown’

Beauty In The Breakdown is an exhibition by two Canadian based artists who wear their femininity on their sleeves. Having first shown together almost a decade ago, this special exhibition is a reunion and anniversary of sorts for both artists.

Each artist wields a certain kind of mojo that make human hearts skip a beat. The more one looks at their works, the more one will start to see the emotional complexity that makes their paintings far deeper than just being eye candy for the soul. Their works span the full array of human emotions, from longing to innocence, to surreal flights of fantasy that only begin to hint at the more solemn emotions that most of us try and hide.

Sarah Joncas was born in 1986 and grew up in both Hamilton and Niagara Falls, Ontario. Her interest in the visual arts developed at an early age, starting with the dedicated drawings of dinosaurs and lizards. Eventually the study and enjoyment of working from existing images stirred up the need in Sarah to create images of her own; ones that could reflect the world, yet also appease the personal feelings/ideas that she herself maintained. With this, her direction changed gradually from the world of animation, towards a path in fine art.
Joncas is a graduate of the Ontario College of Art and Design and currently resides and works out of Toronto, Canada. Her work focuses on the mysterious lives of her female protagonists placed within film-noir atmospheres. In this exhibition, Joncas explores themes of mystery, troubled relationships and betrayal taking cues from modern day symbolism and contemporary technology.

Camilla d’Errico is a product of her split heritage, Italian and Canadian rolled into one: Italian fiestiness, Canadian politeness, and an early addiction to Saturday morning cartoons, comics and manga. Growing up she was more often doodling sexy damsels and dragons on her textbooks than reading them. In 1998 when Camilla first attended her first San Diego Comic Con she realised that a 9-5 day job would kill her and this was what she wanted to do. Thanks to her relentless energy, dedication, and just enough sleep deprivation, she has followed her dream of working creatively for a living.

Camilla’s unique style continues to be in demand and her client list includes Dark Horse Comics, Image Comics, Random House, Tokyopop, Hasbro, Disney, Sanrio, Neil Gaiman and she also works with video game and movie companies on character development. Her own characters and properties, Tanpopo and Helmetgirls, are loved by fans and followers and now inspire Cosplay costumes. She has successfully merchandised and licensed her beautiful artwork across a variety of categories: clothing, stationery and gift, accessories, art prints, etc. and continues to expand her licensing program. Her emotive and eloquent paintings have propelled her to the top of the ranks of the New Contemporary art movement
~ Free Prints To The 1st 30 Guests Through Our Doors This Saturday ~
Free to the 1st 30 guests through our doors this Saturday evening. Please do not call or email asking for one, they are strictly for our local patrons on opening night. 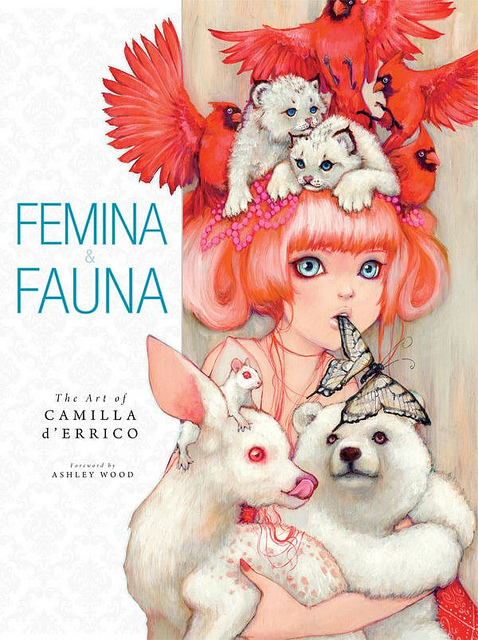 We’re happy to announce that Camilla d’Errico‘s first full-sized art book is being issued later this month by Dark Horse. The book will be available from Jan. 26th via Dark Horse and from Feb. 2nd in stores around the world. The book is a hard cover measuring 8.5×11″ in size and featuring 112 full color pages profiling Camilla’s work from the past five years.

This art book is a career achievement for Camilla, as she says: “The anticipation of having my own full sized art book has been building for several years, so to finally have Femina & Fauna released is an overwhelming experience. I couldn’t have imagined the book being any better. Dark Horse has helped me fulfill a lifelong ambition and blown me away!”

Congrats Camilla! Be sure to pick up your copy when ‘Femina & Fauna’ hits stores next month.

An interview with Camilla d’Errico

Camilla d’Errico is a product of her split heritage, Italian and Canadian rolled into one: Italian fiestiness, Canadian politeness, and an early addiction to Saturday morning cartoons and comics. Her first love was and still is comics. Growing up she was more often doodling sexy damsels and dragons on her textbooks than reading them. In 1998, Camilla first attended her first San Diego Comic Con where upon the moment she walked through the doors she realised that a 9-5 day job would kill her and this was what she wanted to do.

After a few years in the comic industry Camilla expanded her style into a variety of other ventures: snowboard decals, magazine covers, toys, clothes and the pop art gallery scene. Thanks to her relentless energy, dedication, and sleep deprivation, she has followed her dream of working creatively for a living. She is part of what may be the first art movement in Western History where women are not second-class citizens, but have an edge in the mind of the public, especially when it comes to capturing the essence of the modern woman.

Please talk a lil’ bit about the general idea/vibe behind your new series of works for the ‘Vain Remains’ show with Caia Koopman.
This series is very unique for me because i’ve stepped outside my comfort zone and explored a different visual theme. Vain Remains, is really about nature, cycles of life and death, and normally i play out my themes with living animals, or head gear, but this time i chose to take the literal approach of skeletons. Often times, people will look away from them because its too grim, but its part of life and its important that we don’t loose sight of that. Sometimes you have to look at the scary things to see how beautiful they really are.

What do you consider your biggest overall influence?
For these pieces i found a lot of inspiration from my youth. I grew up in a small country town, and often i’d come across a deer skeleton, or cow remains in the pastures and fields i traversed, so i really tried to remember those moments. I picked out the colors from my memories, and put them back into these paintings along with patterns, for me those represent the vanity and beauty of the remains. Decorations to ease our eyes and hearts.

Please describe your perfect day out in Vancouver.
When its sunny here, nothing beats this town. If it were sunny, light breeze, not too hot, I’d go down to the ocean for a walk, then over to Granville Island Market to pick up fresh produce and flowers and enjoy it with my friends at Third Beach, where the sunset is breathtaking, then walk down Robson street in the evening and catch all the street socializing i could…probably couldn’t ask for more.

If you had an unlimited budget and time was not an issue, what grand artistic vision would you love to bring to life?
A fashion show that featured my helmetgirls. I would give anything for that, to have a runway show. I would create dresses and headgear that i’d place on models, paint them black and white and watch my living paintings going down the walkway.

Any highlights you’d care to share from your recent onslaught of comic festival appearances? You’ve been around the globe in the past few months promoting your Tanpopo series and everything else you’ve got cookin’.
Comic Con was amazing as always, and the biggest highlight for me there was my panel with Dave Mack and Terry Moore, on Life Drawing Amanda Palmer. It was amazing! My first SDCC panel ever. What a great audience and concept, too cool ^_^. Though i have to say that my Singapore trip was pretty awesome too. I featured my entire booth on Tanpopo, sold out of books, and had an overwhelming response to my art. I was quite moved.

Please tell us a little bit about all the upcoming projects you have planned for the coming year and what lies ahead for Tanpopo?
The next thing coming out is my issue #1 of Sky Pirates of Neo Terra with Image comics. Its coming out at the end of the month, and will be part of a 5 issue series. This comic is based off a Nintendo DS and Wii game that i worked on the art for. It’s very cool. And the game comes out in the spring of 2010, so watch out for that! Also, Tanpopo continues with issue #3 this winter! I’m very excited to work on this, its my passion project that people are really responding to so i’m very thrilled to be able to give another chapter in the series. I also have many other things on the go, but you’ll have to check out my website, or else this answer is going to become epic in length!

Look for Camilla’s ‘Back Talk’ set of questions over at Juxtapoz in the coming days.

Camilla and Caia will be present at the opening, so please be sure to swing through. 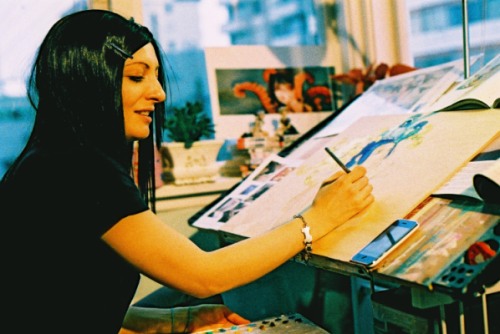 Camilla d’Errico was recently interviewed at great length by the fine folks over at the Toysrevil blog. Check it out here – just a great and super informative read. Camilla has so many things cooking right now, it’s a true inspiration. A book from Sparrow, a postcard set from Dark Horse, a special install in Vancouver around the upcoming Olympics, her graphic novel, plush figures, a video game with Nintendo, talks of taking her helmet girls to the big screen and so much more. Whew!

Look for our interview with Camilla to be posted here soon as well. Also be sure to keep your eyes peeled for a ‘Back Talk’ feature over at Juxtapoz.com as we head into the opening of ‘Vain Remains’ next Fri, Sept. 11th.

Check out a ‘sneak peek’ of Camilla’s progress for the show here.

Opening Reception: Fri, Sept. 11th 7-11PM
*Both artists will be in town for the opening reception