Mid-City Arts is pleased to present the first solo show ever from the infamous LA tagger, Chaka. Resurrection opens April 25th and will feature highly anticipated new work from the mysterious Chaka.
Daniel Ramos, AKA Chaka, was 18 when he was arrested and charged in 1991 with 48 counts of vandalism, trespassing and causing $500,000 in property damage. Chaka’s signature tag had appeared in a staggering 10,000 locations from Orange County to San Francisco. At the height of his notoriety Chaka was demonized by mainstream media and culture as being little more than a prolific vandal. At the same time he was celebrated by street artists who admired the ability of a teenager from the projects to literally make his mark on the vast, glitzy LA cityscape in such a ubiquitous manner. He is credited with breaking away from the New York “wildstyle” popular at the time and introducing clearer, more blockish lettering into tagging. Chaka was one of the first to create a reputation as a recognizable individual tagger, and spawned many imitators. However Chaka was not just a lone operative. He was part of the LOD crew and as such, his work in reclaiming hard to reach places of the cityscape (freeway overpasses, walls, trains etc) on behalf of his crew is recognized by fellow taggers as a selfless achievement for LA’s graffiti scene as a whole.
After spending a year tracking down the once unavoidable Chaka, Mid-City Arts presents his first solo show. For Chaka’s fans as well as street art collectors, this will be a rare opportunity to revisit the nostalgia of the early 90’s, and own a piece of LA’s cultural history. Chaka himself will be in attendance and there will be a limited number of signed posters in addition to his works available for sale.
Opening Reception: April 25th, 7:00-9:00pm
Mid-City Arts
5113 West Pico Blvd in Los Angeles

*Note: the above is the official PR from the show / we’ve edited this post just a bit / see first comment post to read another viewpoint on this story… 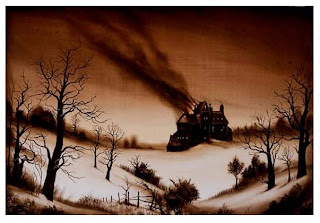