Heads up San Francisco friends, Jeremy Fish is exhibiting a 100 new commissioned pieces inside San Francisco’s City Hall for “O Glorious City”.  For our Los Angeles friends, don’t fret – Jeremy Fish will be exhibiting alongside Jim Houser at Thinkspace Galley Summer 2016. All the details on “O Glorious City” presented by FIFTY24SF in association with Upper Playground and the San Francisco Arts Commission are below; and don’t miss out on the artists reception and City Hall’s birthday bash this Thursday, November 19th.

FIFTY24SF in association with Upper Playground and the San Francisco Arts Commission are proud to present “O Glorious City.” Now open to the public on the Ground Floor of San Francisco’s City Hall, the exhibition features 100 newly commissioned works of art by Jeremy Fish. “O Glorious City” features both drawings and photographs about San Francisco, with many relating specifically to historic City Hall. As part of his process to create this exceptionally large body of work, Fish assumed the role of the first official Artist in Residence at City Hall with gusto. The show’s title, “O Glorious City”, comes from a text written by former Mayor Edward Robeson Taylor inscribed in the rotunda of City Hall: “San Francisco, O glorious city of our hearts that has been tried and not found wanting, go thou with like spirit to make the future thine.”

Check out this awesome interview with Jeremy Fish by Creative Live. 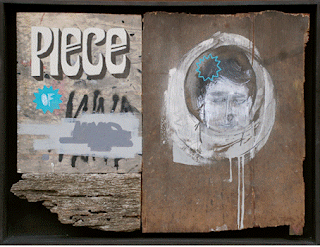 Word To Mother
“Piece Of Mind”
Mixed Media on Salvaged Wood
24″ x 19 1/2″ (62 x 49cm)
The piece comes from WTM‘s third UK solo show with Stolenspace, ‘Lost For Words’, that took place this past March. Perfect mix of both his styles and works on many levels, love it.
For tons of great coverage on this show, check out Arrested Motion here and here.
Watch for WTM to return to the U.S. later this year at Upper Playground’s Fifty24SF Gallery.