Thank you to everyone that made it through for the opening of our current shows with Scott Radke and Jen Lobo. Both artists had an amazing time and the gallery just looked stunning with both shows playing off one another in beautiful fashion. Radke just arrived back home to Ohio after driving cross country to the show and got in touch and asked that I pass along his thanks to everyone, he was over the moon to see a gallery filled with his sculpture and photography for the 1st time. Both shows are still on view, so don’t miss your chance to check them out in person if you find yourself in Culver City over the next couple weeks.

Also check out some nice coverage of the show from our friends at Arrested Motion here and Hi-Fructose here.

Both exhibits on view through July 9th (FYI: we’ll be open this Sat during the holiday weekend)

Check out the Juxtapoz ‘Back Talk’ interview with Jen Lobo here:
www.juxtapoz.com/Features/back-talk-with-jen-lobo

Reception with the artist:
TONIGHT – Sat, June 18th 6-8PM in our project room

An interview with Jen Lobo

Please talk a lil’ bit about your work in general and where the strong nautical themes developed from.
My work is allegorical, using animals as the subjects. When I am developing a theme, it usually comes from something I’ve read first. It could be a story about an animal or a fact of its behavior. Then I draw from my own experiences or something that has truth to me or again, something I’ve read about human behavior. I’m very interested in the parallels and also the dissimilarities between how animals and humans are perceived. I can only point to one source as the fostering of the strong nautical influence. I grew up in San Pedro (the port of Los Angeles). My sister and I practically lived at Cabrillo Beach. The aquarium, the maritime museum, and the port seeped into my blood early on.

What fuels you to keep creating?
To be honest, I’m not sure. When I think about it rationally, I’m a little perplexed. I have no idea what motivates me to forgo sleep like I do. I just know that it’s something I have to do and I’m miserable without it.

When did you know you wanted to follow the path of being a full-time artist?
Pretty much always. I knew from a really young age that I would be doing something artistic, but I never really had an idea of what that looked like. I sort of just have gone where the wind has taken me and I have no complaints thus far.

Animals are a big part of your work and your life, what is the importance of that?
It’s just one of those things that has been such a huge part of my personality for as long as I can remember. We always had tons of pets growing up and I’ve always been drawn to animals. I definitely wasn’t a loner kid, but I’ve always felt somewhat alone, like always on the fringes of friendships. I think when you’re that kind of kid, you find solace in relationships with animals. It’s a language I’ve always felt comfortable with. I’m a firm believer in making your work reflect your life. I feel like it’s more authentic when you paint what you know. Also, there is a level of abstraction when you use animals. Yann Martel wrote something that really articulates it well. “Speaking before his tribe, naked, he was only human and therefore possibly-likely-surely-a liar. But dressed in furs and feathers, he became a shaman and spoke greater truth. We are cynical about our own species, but less so about animals, especially wild ones.”

What led you to painting with oils as your main outlet of creative expression? Did you start with acrylics?
I started off in acrylics and I just struggled like crazy. I knew I really wanted to paint, but it just wasn’t working out. I can be rather obsessive and the quick drying time killed me. I would end up painting the same thing over and over and never finishing anything. Bob Dob was my teacher at Otis and he’s the one that suggested I try oils. I cannot describe what an enormous relief that was. Finally, it made sense.

Please describe your dream project if time and money were not issues.
Hands down….life-size animals. Whales that are Wyland size.

Any shows or special projects coming up after your exhibit with us here at Thinkspace you would like to mention?
I’m working on a book project with a musician that I am super excited about. It’s still in the early stages, so I think I’m supposed to keep it under wraps for now, but I will shout it from the rooftops once it’s done.

Reception with the artist:
Sat, June 18th 6-8PM in our project room

Jen Lobo will be debuting a brand new body of work with us next Saturday in our project room. ‘Inherit The Wound’ will feature four new oil paintings on wood panel alongside two new watercolor works on paper. Her love of all creatures great and small is showcased within this new series, all of whom she renders to speak on universal themes of love, loss, tragedy and triumph.

We recently paid a visit to her studio in Pasadena and brought back some pictures to share with you all as we get ready for the opening of ‘Inherit The Wound’ next Sat, June 18th. 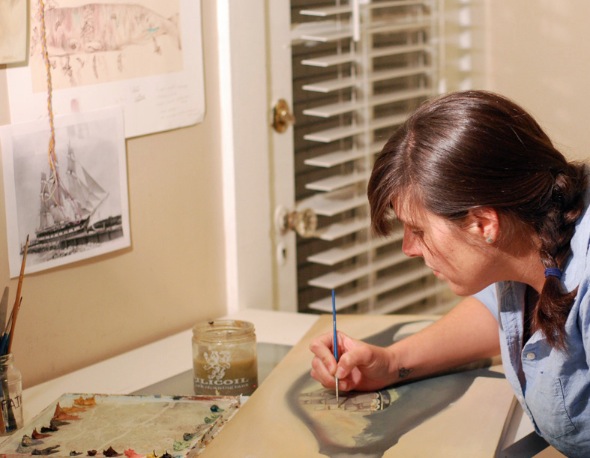 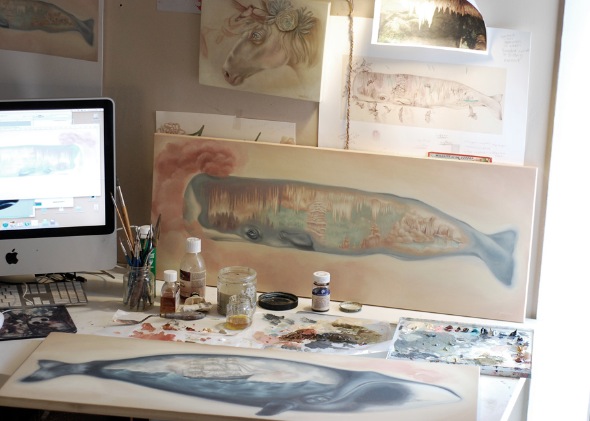 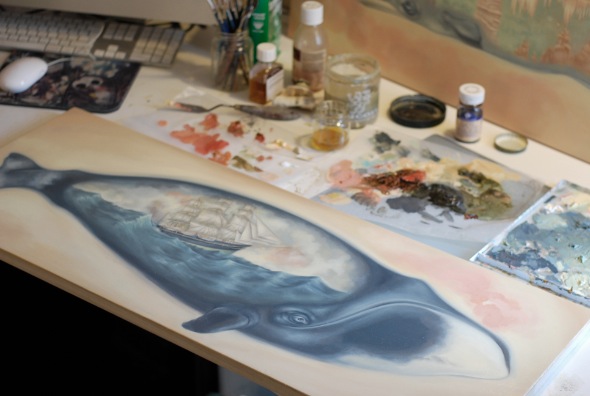 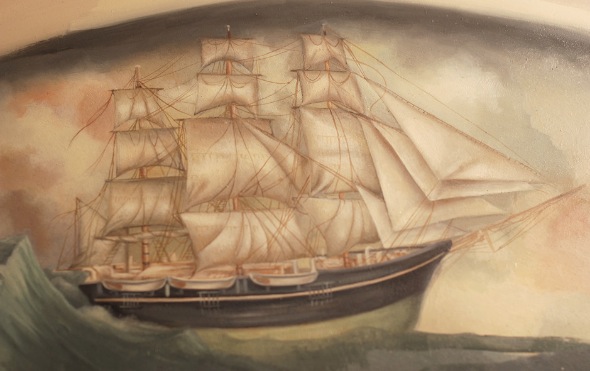 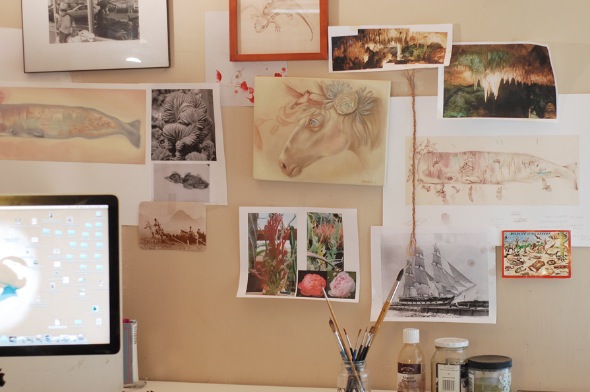 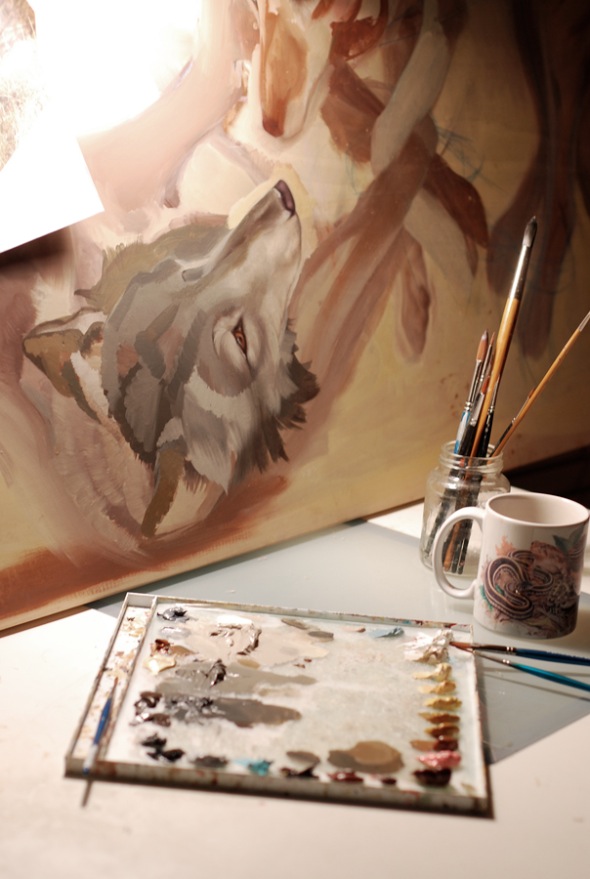 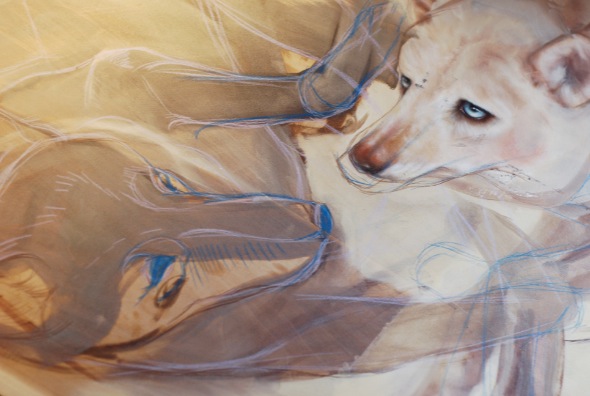 Look for an interview with Jen to be posted here in the week ahead. 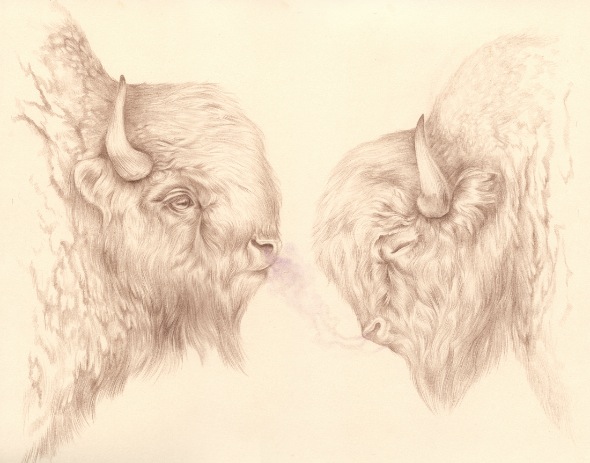 Reception with the artist:
Sat, June 18th 6-8PM in our project room