An interview with Jesse Hotchkiss

Opening in conjunction with ‘The World Unseen and Those In Between’ from Andy Kehoe is our second solo show with artist and professional skateboarder Jesse Hotchkiss. In Jesse’s new series, he aims to portray moments of dreamlike intimacy, both visually foreign and familiar, yet somehow comforting and empowering to the characters within his work.

“The feeling of surrender washes over everything—a relaxing if daunting position to be in. But Hotchkiss seems to imply that falling, sinking, even being buried, might be just another way to reach something higher.” – TheRumpus.net

“Jesse Hotchkiss is one of these gifted individuals. He has a second-nature style when it comes to riding his skateboard and doing the crazy tricks. You’ve probably seen him somewhere at some time doing his thing, and maybe you agree with me that the dude has some natural talent. The thing is he’s also a very gifted artist and illustrator. His paintings and drawings come directly from the heart, and that’s part of why they’re so easy to enjoy.” – Jeremy Fish’s words in Transworld Skateboarding Magazine

Please talk a lil’ bit about the general idea/vibe behind your new series of works for “Learning To Fall“? What’s the story with the show’s title?
This new body of work is a reflection of the place I find myself these days. The title, “Learning To Fall”, was extracted from a Blonde Redhead tune called “Falling Man”. The idea of falling, both physically and metaphorically, has been a potent image in my work. It also has played a big role in my physical life; I’ve been learning to fall off my skateboard for two generations. Last May I pinched a nerve in my lower back and was immobilized for quite some time. This injury was the catalyst for exaggerated confusion and darkness in my life. I was no fun for a while… The title and concept was created before this debilitating injury, but this fall only seemed to accentuate a feeling that was already there; a need to get back in touch with the physical. I feel like the more we are in touch with both our physical and emotional shells, the better we will be prepared to eventually let them go. End of life transitioning surrounds us every day, yet it remains one of the biggest taboos. Personally, I feel a great momentum to explore this concept with an open mind and heart; both in my work and life.

On your site you separate your work into four distinct categories (“Air,” “Land” “Love Lump” and “Water”). Please tell us a lil’ about each series?
These are general groupings for my past work. The catagories are essentially the four elements with Love Lump representing fire. The Love Lump series was for a Valentine’s Day themed show titled “Love It Or Leave It”..Look for my revamped website following the Learning To Fall exhibit (http://www.jessehotchkiss.com).

You are also a pro-skater, tell us a lil’ bit about your crazy summer that saw you going across the U.S. and then some?
Thanks to a crash course with my amazing yoga instructor and chiropractor I was able to bounce back (pun intended) and return to my skateboard. Last summer I went on an epic road trip with my friends at American Misfits (a skateboard/comedy show on Fuel TV). For all of August I was driving (sometimes the iconic ’79 Mercedes Benz hearse, complete with skatable coffin) from Los Angeles to Portland, Maine. The premise of this trip was to document all the skate scenes we could find, add slapstick and bands to make eight episodes of American Misfit’s third season. I met so many new and old friends and experiences along the way it was like life in fast-forward. We hit 22 cities in 31 days! It was the best summer ever!…that is except for driving from Alaska to LA the summer before.

Much of your new work includes the use of drift wood, did you gather the wood yourself and if so, do you have a favorite spot you regularly hit up?
I’ve been collecting driftwood for years. Mostly I’ve found it on the shores of Goat Rock Beach, Hollister Ranch beaches, and various Alaskan and Oregon beaches.

How did spending time during your youth in New Mexico influence your artwork?
I spent the years between 5th and 12th grade in Santa Fe, NM. I became friends with young artists out there that were inspiring and also somehow affiliated with the skateboard scene. People like Nate Kraw, Joe Melvin, Mike Giant and Sam Flores became my peer teachers. Also I had an amazing art teacher (Gary Myers) in high school that supported all the exploring I was into. Aside from the people, the environment had a profound effect on me. My work often revisits those stark, muted landscapes of the Land of Enchantment.

If you had an unlimited budget and time was not an issue, what grand artistic vision would you look to bring to life?
First I would acquire a large plot of land with natural swimming holes, hiking trails and seashores. I would invite some close friends to help me build and live in this art house. It would be mostly handmade with lots of personality and space. There would also be a skateboarding component to this community.

Do you listen to music while painting/drawing? If so, do you have a current favorite that inspires?
Silence is golden, yet I also work while listening to music. I find welcoming creative sound-scapes in the music of Ulrich Schnauss, Built to Spill, Augustus Pablo, Tommy Guerrero, Abstract Rude, and Ratatat most recently…

What do you consider your biggest overall influence?
My grandmother’s example of passionate, creative living has influenced me the most.

What have you got coming up in terms of shows after your solo with us – both artistically and on the skate front?
After the Learning To Fall show, I will be exhibiting at Thinkspace Gallery again in January. The show is called ‘A Cry For Help’; it’s an endangered species benefit group art show. I can’t wait to see everyone’s creatures! The American Misfits episodes I skateboarded and acted in will be televised sometime next spring on Fuel TV…

Also I have launched a environmentally conscious skateboard company called ShredLife with the producers of the American Misfits show, Laban Pheidias and Ted Newsome. Also on the team is Chris Lambert and Chuck Wampler. I hand draw the majority of the graphics.

My skateboarding/acting will be featured in a music film produced by and for the band Angels and Airwaves. It’s in celebration of their new album “Love”. I believe it will premier on Valentine’s Day ’10.

Back on the art front, look for me in a two man show at 2HeadedHorse Gallery in Echo Park sometime in spring ’10.

Check out the works featured in ‘Learning To Fall’ here:
http://www.thinkspacegallery.com/2009/12/project/works.php

Please shoot a mail to contact@sourharvest.com if you are interested in any of the works in the show. 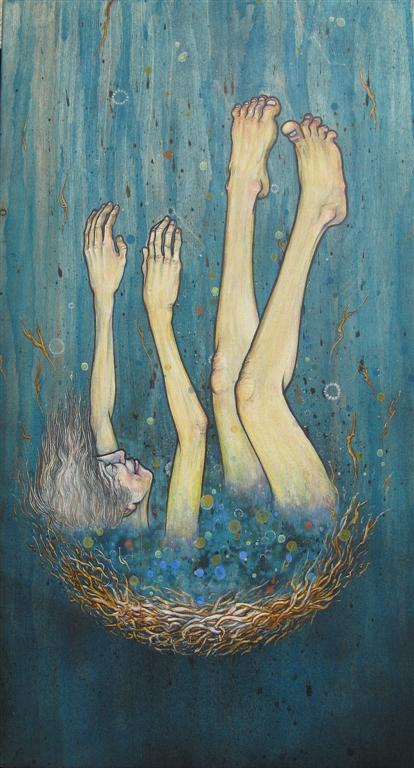 Jesse Hotchkiss returns to our gallery this December after selling out his debut LA solo show, ‘Greener Grass’, with us back in Dec. 2007. The new works for ‘Learning To Fall’ are pure Hotchkiss and this time around all the works are going to be framed in nice shadow boxes Jesse has built himself, so we’re really looking forward to all seeing his new series. We’ll have a digital preview ready a few days out from the opening for those interested, so be sure to shoot us a mail to contact@sourharvest.com if you’d like to receive that.

In the meantime, please check out Jesse’s ‘Back Talk’ feature with Juxtapoz.com here:
http://www.juxtapoz.com/Features/back-talk-with-jesse-hotchkiss

“Learning To Fall” from Jesse Hotchkiss

* Look for our interview with Jesse to be posted here soon.

A great auction from Keep-A-Breast closes this afternoon. The ‘Generation Pink’ auction will be held this evening in Santa Monica at the Brookdale Senior Living complex. As always, a simply great cause, so please be sure to check out the available casts.

Check out the auction here:
http://www.coloradoelders.com/bslkab/generationpink_westdivision_breast_cast_auction_page.htm