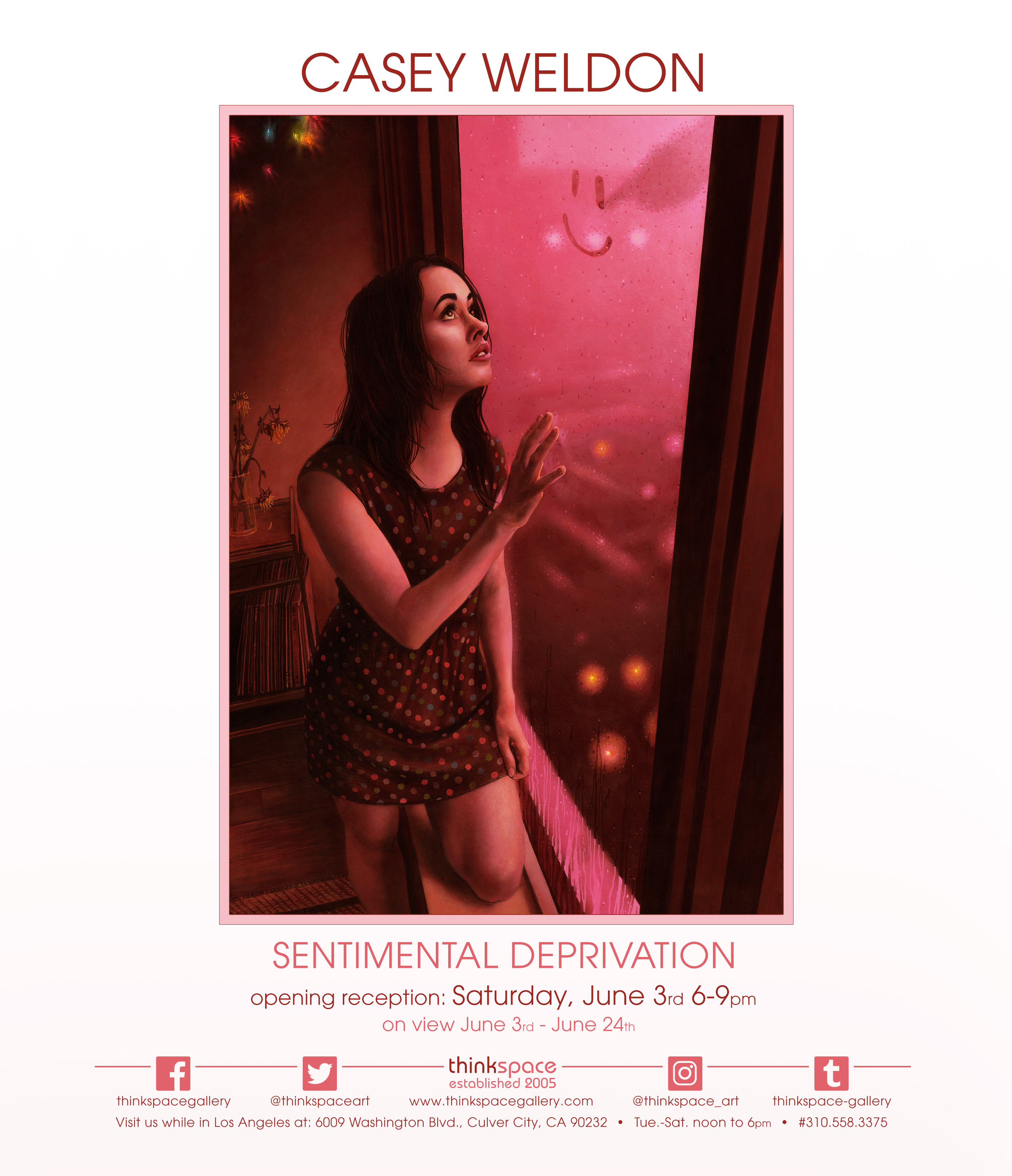 Thinkspace Gallery is pleased to present new works by Casey Weldon in Sentimental Deprivation. Born in Southern California, Weldon attended Art Center College of Design in Pasadena and is now based out of Washington, D.C. by way of Las Vegas, New York, and Portland. His surreal paintings combine elements of humor, nostalgia, and the absurd to stage open-ended narratives, and lush imaginary views, that border on the hyperchromatic edges of psychedelia. From optically disorienting four-eyed kittens and seemingly phosphorescent girls to giant disproportionately scaled Chihuahuas in desert canyon landscapes, nothing is too weirdly outré or unimaginable for Weldon’s visual fictions.
Unrestricted by the prohibitive constraints of probability, Weldon’s imagination playfully borrows imagery and kitsch from popular culture – past and present – and recombines its familiar fragments into beautifully strange reconstitutions.

Weldon gambols with the manipulation of scale and contrast to create otherworldly scenes, as though pulled from the cavities of the unconscious and its latent thread-like associations. The works alternate between moments of intense darkness and incandescent light, figuratively and literally. Saturated with lush color and detail, they are stylized by idiosyncratic palette choices that capture a range of brightness and atmosphere, from the intensity of neon to the lambent of dusk and the recesses of twilight obscurity. The unexpected is always at play in the subject matter, as unlikely pairings, exaggerated spatial relationships, and incongruous contexts offer infinite possible realities and suggestive collusions. The world, delivered through the lens of Weldon’s imagination, is distorted on a hyperbolic visual plane, where the mythic proportions of incidental symbolism are laid open to the willing. Weldon creates works with hooks rather than imperatives, providing an openness to interpretation for the viewer rather than a prescriptive demand to be read.

Inspired by the early twentieth century surrealists André Breton and Giorgio de Chirico, Weldon uses similar creative strategies like juxtaposition and stream of consciousness, filtered through a contemporary sensibility, to defamiliarize the familiar and problematize the seemingly innocuous elements of the day to day. Charged with a range of affect that taps into everything from the playful and irreverent to the uncanny and melancholic, his works are beautifully disruptive and galvanized by the unpredictable. Technically, the paintings, though illustrative in style, combine moments of highly-detailed representational realism offset by stylistically surreal interjections. Recurring themes include the exploration of humankind’s tenuous interaction with and coexistence within nature – especially impactful in our era of environmental depletion – and the generative possibilities of extreme displacement and exaggerated context. 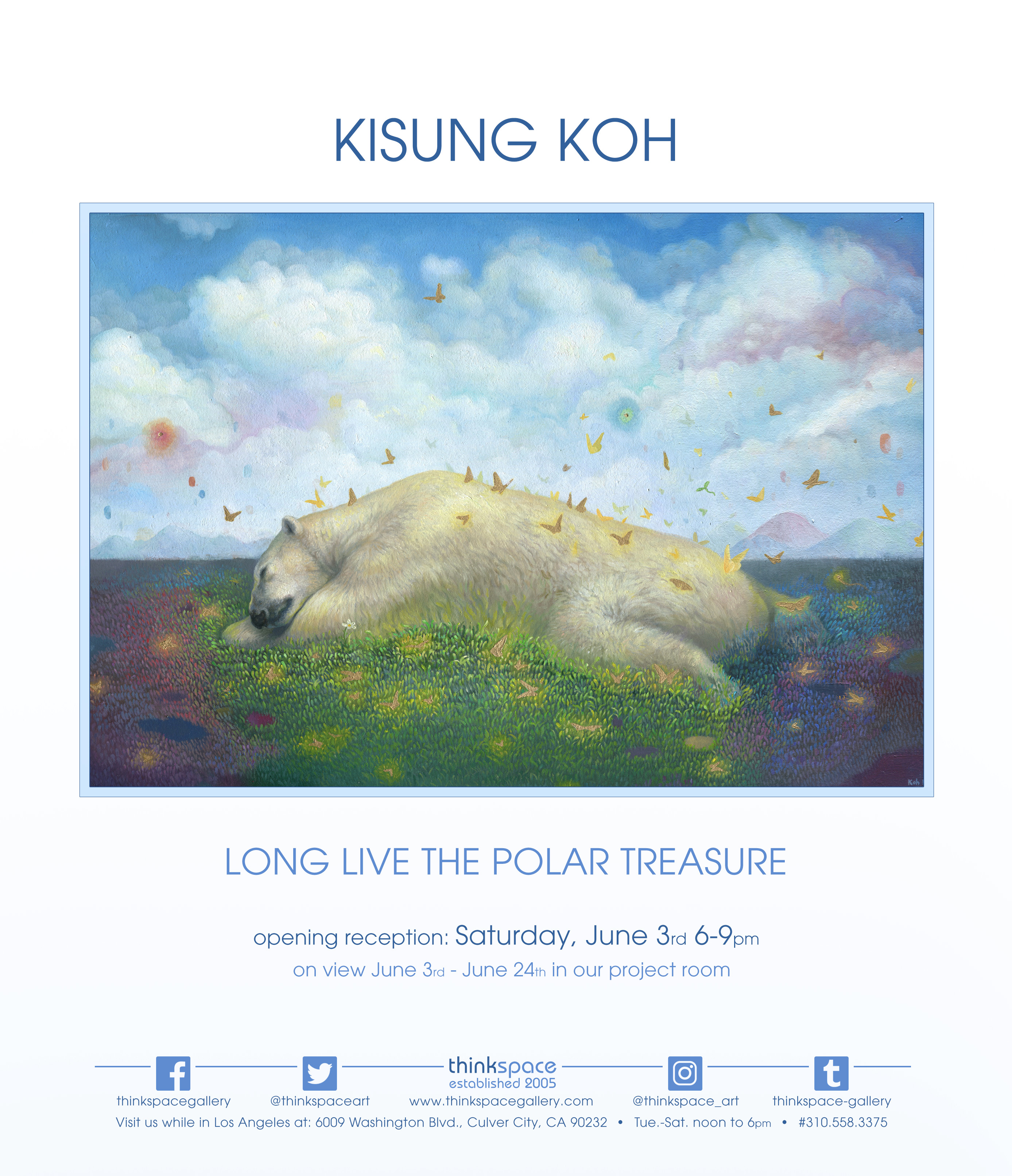 Concurrently on view in the Thinkspace project room is Long Live the Polar Treasure, featuring new works by South Korean, Toronto-based artist Kisung Koh. Koh’s first solo exhibition with the gallery is dedicated entirely to the majestic and endangered polar bear. The artist’s fascination and love for wildlife are evident in much of his practice. Exploring the spiritual potential of the wild and its stoic inhabitants, Koh draws analogous connections between animal and human plights.

With its Arctic habitat seriously depleted and at risk given the onslaught of global warming and climate change, the polar bear’s existence and longevity as a species are no longer secure. Koh has used this body of work as an ode to the ongoing displacement and compromise due to the destruction of the bear’s environment. Drawing personal parallels with his own life, Koh identifies with the difficulties of deracination and the pangs of dislocated belonging.

Working in oil on panel, Koh creates beautifully detailed works, dreamlike in their atmospheric execution and dramatic in their contrasts between light and dark. Hyperreal depictions of these animals seem to emerge from soft hazy atmospheres or blackened darkness. Depicted in varying states of rest, in verdant landscapes to which they don’t belong, the works are beautiful but heavy with an ominous suggestion of sadness.